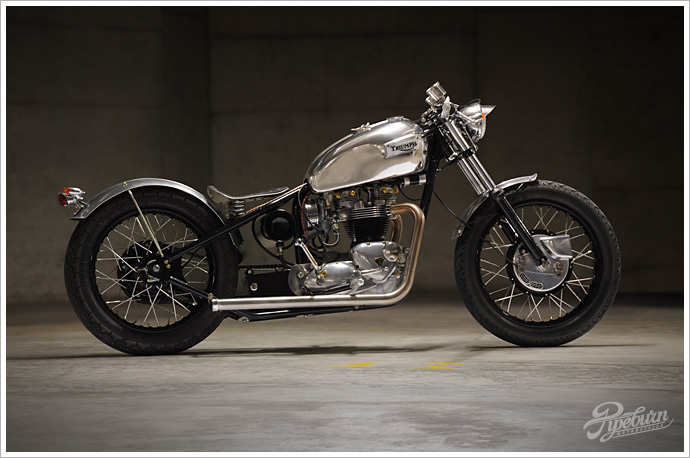 Bikers can seem like a tough bunch of humans, even for those of us on the inside. It doesn’t seem to matter how long you’ve been riding or what kind of bike you ride, when you roll into that car park during your Sunday ride and the guy with the 1% patch on his leathers pulls up along side of you, chances are you won’t be making a joke about his gnarly beard any time soon. That’s not to say that the guy himself isn’t a stand-up bloke, but to the casual observer he might seem just a little challenging, conversation-wise. Now the owner of this Tiger is definitely no Hell’s Angel, but to the uninitiated his shaved head and no-nonsense ride may throw you a little. And yes, when I say “you,” I really mean “me”. But once you overcome the irrational preconception crap, you’ll find one Mr. Chris Atkinson – probably one of the nicest guys you could ever hope to meet and his sweet Triumph bobber that looks tough, but has been know to help old ladies across the road when not carrying its owner around. Honest. Here’s Chris. “I’m 52 years old, I married my childhood sweetheart Karen, still in love and having a blast, 2 boys, Tom 22, Josh 19. I live on a small farm, have been here for 20 years. I am a retired panel beater/spray painter/truck driver and now Karen and I are in the childcare business. My dad (may he rest in peace) used to race bikes around Parramatta Park Raceway and then he got a few hot rods. He was a butcher by trade but loved working on cars, bikes and his old timber ski boat. We lived across the road from the Westmead Speedway, where the Westmead Hospital is now, and I used to sit up on the roof of our house and watch the speedway cars and bikes race the oval track. All the neighbourhood kids would get together and make billy carts and race down our hill out the front of our house. So this is where my love of bikes and cars began.” “I raced for a few more years but my knees packed it in A few ops later I sold some of my bikes but I kept my first Maico 250 and the little CR 125. After not riding bikes for a few years I got the bug back and thought about a road bike. Then I went to Deus one day while we were at Sydney Uni watching my boys play Rugby and I saw the bobbers there and that was it… I had to get one. I met Filip Sawczuk at the Deus bike build off, he has a very neat Triumph 500 bobber. I picked his brain and he gave me some good tips.” “I searched for around a year to find something and then I found a guy in the States, Dave Helrich from Helrich Custom Cycles; he builds beautiful bikes that I had never seen the likes of before. One in particular called “The Metal Street Fighter”. This is the bike I based mine on. Tried to get one, but Australian import regulations won’t let you import modified bikes or cars. So decided to have a go at building one myself, with the help of Dave via many emails and telephone calls; he’s a top bloke.

I found an original ’71 Tiger 650 on Ebay, went around to the guys house and see an old mate of mine I hadn’t spoke to for 10 years. See what happens when you take a different path in your life? Great to see him! I brought her home, got her registered, and went to work.” “I got a Factory Metal Works rigid frame along with some other parts to get me started. Stripped her down and the fun began. Fitted the engine, made up brackets to fit the oil tank, a battery box, modified the steering head, rebuilt the forks and after about 3 weeks I had a rolling frame and was really happy with the look.

Then I made up brackets to fit the hand-made aluminium guards from 7 Metal West in the States. I wanted to make the front brake a bit of a feature on the bike, I just love the art deco look of it so I had it and the rear brake ceramic coated. I wanted the tank to be a metal finish. Did some lead wiping repairs to the tank and had it flame coated in aluminium, an industrial process that sprays a 1 to 2mm coating of aluminium on to metal surfaces. The finished product is really rough, so 2 days of sanding starting with 60 grit paper slowly working my up to 2000 wet and dry and lots of polishing transformed the tank. Hand polished the engine with steel wool and purple polish made it look a treat. Got some nice stainless drag pipes to compliment the metal look I was after.” Note the beautiful cloth-covered wiring beneath the seat

“Fuelled her up, primed up the new Amal carby,
ignition on, and she started first kick”

“I had the wheels, frame and other bits and pieces powder coated black. Then the new stainless spokes and bearings fitted to the wheels. Dave Helrich made a trick seat for me as well. I was like a kid at Christmas time getting all this stuff home. Fitted everything up and couldn’t believe my eyes, this was my bike! Another couple of weeks making bits and pieces and fitting all new stainless bolts and she was nearly done. I fitted a Tri-Spark electronic ignition, high voltage coils and rectifier. I wanted to make the wiring a feature as well, rather than hide it. I heard about some old school cloth covered wiring in Victoria and had it all rewired with as much of the wiring exposed as I could. Also wanted a bit of a hot rod look to her, so modified a Mooneyes Spinner Cap to hold the tank down and mounted Big Daddy’s Rat Fink on top of the battery box (my mascot) and modified a taillight and blinkers.

Fuelled her up, primed up the new Amal carby, ignition on, and she started first kick. Took her for a quick run down the road with the biggest bloody smile on my face. It was fantastic. Karen helped with some of my second guesses on how the bike should look, and holding those bits and pieces to get a tack weld onto. Also gave herself a good pipeburn (Yay team – Andrew) holding the bike up for me.” “I reckon the only thing I would do different would be to get a 5 speed as the bike just lacks that top end and it would be so much nicer to ride with an extra gear. I have just ordered a 750 Big Bore kit, and I’m gonna rebuild the bottom end and balance the crank.” “This may sound corny and you have probably heard it all before, but the best thing about building this bike is that at the age of 52, I have discovered a whole new world out there, met so many people and made new friends, especially all the guys from Sydney Cafe Racers.”