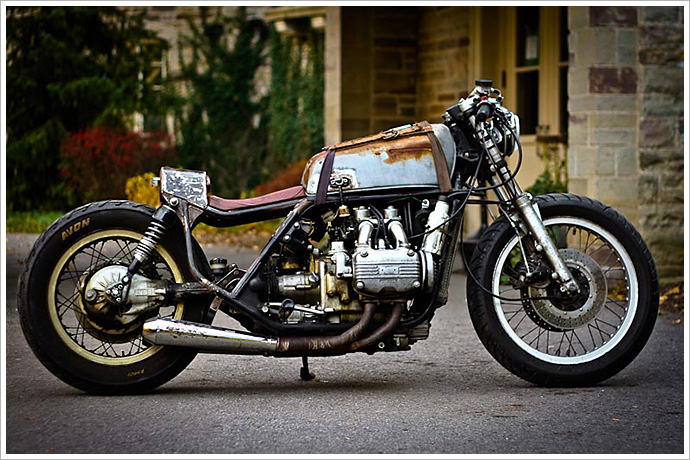 If we kept a list of “bikes we damn well should post more of” on the wall of the Pipeburn dumpster office, I have little doubt that rat bikes would be at the top of the list. Now this might polarise some of you reader types out there, but rat bikes really push our buttons. There’s just something so amazing about a bike with its original pretenses of polish, prettiness and good looks stripped away to reveal the beautiful ferrous reality of all that metal, rubber, benzene and greased-out muck – like some subterranean-dwelling Nordic earth god has summoned the elemental forces at his disposal to create a means of transport that will simultaneously anger the other gods with its brutality and make them so green with envy they are likely to smite us humans just to relieve their frustrations. This bike does just that. Feast your puny, mortal peepers on Paul Dutra’s supernaturally cool Honda Goldwing Rat, “El Guapo”.

Paul’s turn. “It all started when a good friend of mine from www.DoTheTon.com mentioned my name to a local magazine editor (Glen @ Mojo Magazine). Glen asked him if he knew anyone that was willing to take on a project bike. Tom Moreau who is a subscriber to Mojo Mag, had owned the bike since 1976. He had just bought a brand new Harley bagger and after having the Wing for so many years and putting over 40,000 miles on it, did not want to see it go to scrap. Tom asked Glen if he could scout someone who was willing to revive the bike and get a few more years of enjoyment out of it. After I met Tom, I showed him some photos of previous bikes I had built which he admired. At that point, he was sure the bike was going to a good home, so off to the airplane hangar we went where Tom kept his little plane stored, along with his… Goldwing 😉 ” “The stock Goldwing had a full Vetter fairing and Krauser bags and trunk, it was all decked out with fog lights and extra brake lights. He had taken very good care of the bike and had a surplus of spare oil filters and plugs, he even gave me a period correct Honda sync gauge set in its original box. I managed to take the bags and fairing off, then I lowered the forks through the trees and stuffed it all into a very short Dodge Caravan… all in the middle of winter… outside the hanger. After dragging the rear bumper of the van the whole drive home, the Wing sat for a couple of months while I caught up on a few other bikes. I then realized I only had a few weeks to build the bike for a solo trip I take every year with a project bike. Last year’s bike was my ‘80 CB750 Cafe Dragster (you can see it on www.backalleymotorcycle.com), where I left Toronto and headed East with no plans… but ended up riding through Sturgis, Vegas, LA, Bonneville, and back to Toronto… in two and a half weeks. This year’s trip was unfortunately gonna be shorter but LA was still in the books. When I was there last year, the SO-CAL Norton Group invited me back for their annual Prince of Darkness ride which I happened to attend… but didn’t plan. I took them up on the offer and made it my goal to have the Wing ready for my annual summer trip back to LA.” “The Wing was on the chopping block and the plan was to lace up some pretty 18” wheels, chrome the hubs and rims, a bling’n candy metal flake paint, and lots of chrome bits here and there. Turns out I didn’t have the budget for all that bling this year so I went in the complete opposite direction and made it a Rat Cafe… lol. If you didn’t already know, the tank isn’t really a tank on a Wing, it’s an air box and glove box which leaves a gaping hole in the frame and no traditional back bone. The original tank is under the seat which is lower than the carbs so Honda designed a mechanical fuel pump to get the fuel up to the carbs. This design made for a really interesting build as there are no tanks on the planet that would fit the wing frame as it had no backbone to try different tanks on. I was definitely trying to get rid of the tank under the seat because of the” Cafe Racer” look I was going for, so narrowing of the rear frame was a necessity. After chopping out the original frame section and making a traditional back bone, I still couldn’t get any of my “Cafe” style tanks to fit the still unique frame. I tried a CX, CB500T, CB360, an early CB750, a late CB750F tank and the only one I could see fitting was a rusty old tank I paid $5 for years ago that I found in the back of a mechanics shop in Toronto that had been sitting outside for over 15years, it was off a KZ550.” “Now that I had decided on the tank, it was time to move onto the rear frame. I chopped, chopped and chopped  until there was no sub frame so I started bending tube and fitting different angles and bends looking for the right tail. I wanted to lower the bike, so I went with 11.5” shocks for the rear and that set me up for the ride height I was looking for. Hammering out the rear cowl over the new tube’d rear section out of 3/16” plate, I made it in 3 pieces and welded it all up. Lowered the front forks through the trees to mount up the Tomesselli clip-on’s to the uppers. I had some help from Tim Aysan from DoTheTon and my home boy Vinnie, they came by to help me with some of the wiring so we can get it out for bike night one Thursday night and we managed to get it fired up somewhere around midnight so we didn’t get much riding in.”

“I figured I should go over the bike a little better since I only had a couple of days left before heading out on my trip to LA. I went for a quick boot and noticed some rubbing from the weight of the bike on the 11” shocks so I ended up ordering a set of eye to eye progressive spring rate shocks the same length as the eye to clevis but had to rework them a little. Turns out the shocks were on back order and were due to arrive the day I was scheduled to leave.” “I went into the shop on the Monday, the day I was leaving, and reworked the shocks to fit the bike (cut off eye, weld on clevis) and not having any more than an hour of ride time on the new set up, I headed out with my backpack to the west coast and made it there and back in 9 days.”

While we were talking to Paul about the bike, he called the process of creating what you see here as an “un-build”. That really stuck with us. The idea of finding an old bike and not taking the chaos and age as a bad thing – not seeing all that history and character as something to be removed or fixed but instead as a starting point to bigger, better and grungier things strikes us as a pretty cool way to see things. The Norse gods would be proud.

(All photos via Mondo Lulu)