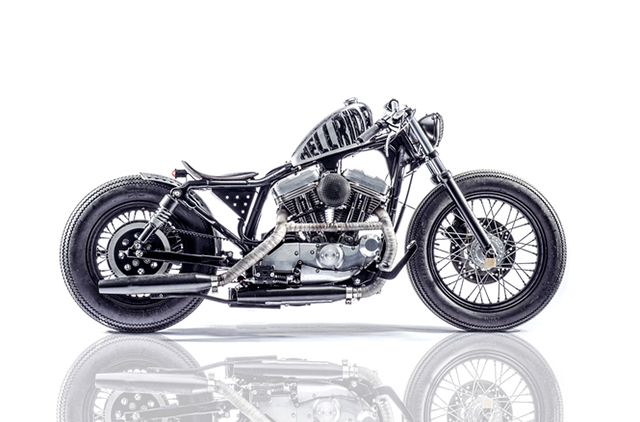 Incredible watches, chocolate and cheese so goes the cliché about Switzerland the landlocked mountainous country in the middle of Europe. But a group of young Swiss lads are making their name with a different kind of craftsmanship, one off custom bikes that tip their hat to the days of old and with a blend of bobber and board tracker they’ve turned a Harley Sportster into a beautiful piece of standing art that also rips the street. Led by Nik Heer the small team at Young Guns Speed Shop includes Fabian, who like Nik has been spinning spanners from an early age and artist/chef Aramis whose flair for industrial design is evident in the finishing touches of the builds. Hot on the heels of their incredible 1947 AJS build, the boys have taken this 1990’s 883 Harley Sportster and given it the vintage treatment they do so well. With the stock bike stripped down to a bare frame the sketch pads came out and the designing began. With the board tracker/bobber combo in mind it was drawn up before being turned into a roller so further designing could be done in all three dimensions. The blacked out frame was cleaned up and the fender struts completely removed and detabbed for that old school, zero clutter look. Next up in making it a rolling chassis was to give the wheels a tougher look, the hubs have been left in raw metal while the rims and then the spokes were painstakingly painted in black. The paint on the outer rims was not just any black but one that would match the predetermined tires and give them a fatter look, they are of course classic Firestones. The suspension was then dumped to the deck, the front forks have been taken down as much as possible before they would bottom out and the stubby rear shocks flatten out the bike bringing the rear tire up close and personal with the seat. With the full roller on the bench the boys began to visualise the bodywork with a minimalist look the order of the day. The peanut style tank is the perfect look for any bobber and custom mounts were fabricated to ensure it runs true to the lines of the backbone. The standard seat is gone, so too are all the mountings and catches that would normally keep it bolted down. In its place is a custom leather bobber seat that not only looks the business but is shaped to flow effortlessly with the lines of the new tank. Finishing out the less is more approach is a new one off rear fender that has been cleverly mounted on the swingarm where the chain guard once was. This gives the look of a tire/fender gap that is incredibly close without running the risk of the two ever meeting with disastrous consequences for the rider. A minimalist look is not too much of a challenge until you get to the vitals of any motorcycle that actually make it run. Solving some of that problem is the mounting of the battery and other electronic components in a small box under the gearbox. The result is beautiful negative space that allows you to look through the frame and see the classic Harley V-Twin without anything obscuring the view. Sadly the standard oil tank is a bulky item for such a small frame and would have completely killed the mood. So the Young Guns set about hand crafting one that was not only smaller but was more in line with the theme of the build. Worried the reduced capacity might negatively affect the oil temperature cooling pipes were cleverly integrated into the tank and back to back testing with the original now shows an even lower oil temp. With so much effort having gone into keeping the bike looking old school and deliberately minimal in approach an over the top heavy flake paint job would have spelt death for the final design. So a local graffiti artist who is a friend of the crew laid down the paint over bare metal that gives a modern twist with vintage inspiration in true bobber style. The headlight is also a classic piece, a 5 3/4in bates lamp with a heavily blacked out grill. While rear lighting is taken care of by another bobber touch, mounted almost out of sight below the seat. Board track styling comes in the way of under and over heat wrapped pipes and individual mufflers with the ultimate touch being the inverted and flipped bars that wear only the essential items. There was of course one final problem, the notoriously strict Swiss road rules meant this beautiful bike could have ended up a static piece of art when really the boys had plans to ride it and ride it hard. Miraculously it passed its roadworthy test and so a side mounted numberplate was built to match the rest of the bike. The collection of builds at Young Guns Speedshop is growing by the day, from true old school classics like models from AJS and Triumph, to vintage motorcrossers and now a one off Harley bobber their portfolio is only going to grow. So with the future looking bright the young men of this thriving Swiss Speedshop are moving on to a bigger workshop and you better believe even more amazing builds are on the way.