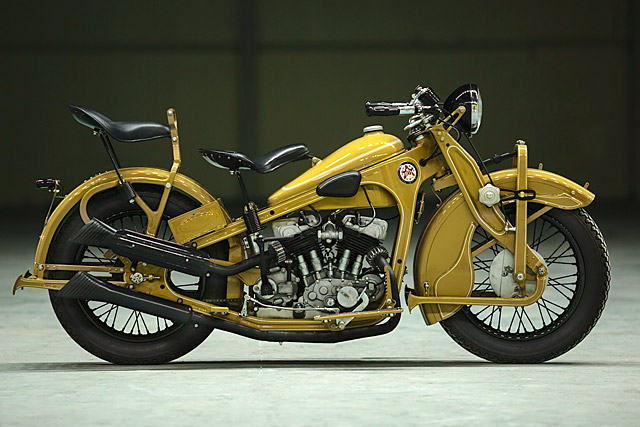 It’s Friday. So what better way to end the week than a stroll (or maybe a brisk ride) down memory lane with our favourite Russian Bike Museum that actually lets you jump the cordons and ride their collection. The fools! Yes – it’s time for another killer classic from Mother Russia’s The Motorworld by V.Sheyanov. This time, it’s a Russian bike too – but with some good ol’ Milwaukee know-how and a dash of Deutschland delight thrown in for good measure. You’d think that such a messy mix of influences would result is something looking like a design-by-comittee nightmare, but behold one of the most beautiful vintage bikes we’ve ever seen. Please say a big ‘Здравствуйте’ to the wonderful ПМЗ-А-750, also known as the ‘Podolskian Mechanical Factory A Seven Fifty’. Fearing that they were falling behind the rest of Europe in the automotive game, the Communist Party’s leaders deemed it necessary for the Soviet Union to step up their motorcycle building skills. So, In 1929, new workshops were built to house the country’s first big vehicular endeavour. They were headed up by the engineer Petr Vladimirovich Mozharov. Fresh from an internship in Germany, he returned with the notion that the USSR was best to simply build local adaptations of the German motorcycles he’d experienced while abroad.

He visited eight ‘well equipped’ motorcycle factories: Allright, BMW, DKW, D-Rad (!), Mabeco, Neander, NSU, and Zündapp. Of these, he felt that DKW, Zündapp and Neander were the cream of the crop. DKW, because of its variety of products, Zündapp, because of its technical solutions. And Neander, because of its unique design concepts. A prototype motorcycle named the ‘L-300’ was developed and tested by the comically-named ‘Scientific Car and Tractor Research Institute’ in Leningrad. Then, in the late 1931, Mozharov and his team moved to Moscow, and were joined by some of the country’s leading automotive engineers.

A rubber-stamped brief was received for the development of middle and heavy-duty motorcycles for the Red Army. So, faster than you could say ‘collective farming’, the NATI-A-750 was realised. In a design that was to set the rules for Russian motorcycles for decades to come, an American-style power unit (Harley’s legendary Model-D donk, in fact) was mounted into chassis modelled off BMW’s finest. Sounds quite OK to us. The double cradle frame was made from pressed sections with a gas tank mounted inside. A leaf-sprung, trailing-link front fork design was used to keep things smooth. The bike’s flat-head, 2 cylinder 750cc engine was located longitudinally in the frame and was mated to a three-speed gearbox, a dry multi-plate clutch and a chain driving the rear wheel. Other details include an oil circulation system, a battery ignition system with a high-voltage coil and an automotive-style distributor.

The bike little brother was the NATI B-375, which was essentially the same bike with half of the 750 engine, which was tilted forward at an angle of 13°. Testing showed that the power of new engines was between 16-18 horses; pretty much bang-on to the brief. Then, in the spring of 1933, four different model combinations successfully performed a reliability test along a route from Izhevsk to Moscow via Gorky – a distance of 1200 kilometres (or 745 miles). We don’t know about you, but we’d hope that wasn’t the entirety of their testing program. Or maybe it was just incredibly tough going.

After much political to-ing and fro-ing, it was decided that the L-300 motorcycle was to be built in Izhevsk, and its bigger breathing buddy was to be birthed at the ‘Podolskian Mechanical Factory’, creating the bike’s now famous ‘PMZ’ or ‘ПМЗ’ initials. Interestingly, PMZ was started in 1900 when Singer, the famous American sewing machine manufacturer, bought 30 acres of land in Podolsk city, near Moscow. Thirteen years later, they were manufacturing over 2500 sewing machines a day.

After the revolution, the plant was nationalised and the manufacturing of sewing-machines was resumed in 1923. Then, in 1931, it was repurposed for the military. Mozharov was handed the keys to the plant and told to make haste. He soldiered on, despite the fact that they lacked the heavy equipment to stamp out the frames efficiently. Then, after three gruelling years, the first motorcycle was almost ready – but still not able to move under its own steam. Tired and run down,  Mozharov allowed himself a little R&R and travelled to a health resort, where he died under what have been described as ‘mysterious circumstances’. After his death, production of the motorcycles continued with great difficulty. By July of 1934, and despite major financial difficulties, the first ten heavy motorcycles were ready. The motorcycles were now officially called the ‘PMZ-A-750’. Nine of them were demonstrated to Sergo Ordzhonikidze, the ‘People’s Commissar’. When he learned that the workers were planning to produce a total of only 500 machines, he objected. ‘You have to produce no less than one and a half thousand such machines!” We’re guessing Christmas was cancelled that year, then. Once in fully-blown production, the A-750 found favour with not only the army, but also with the Police (secret and/or otherwise) and the civil service. Both city and county Russians enthusiastically bought the bikes too, mainly due to their rugged construction and great looks. On the downside, their rideability was scant and they were known for their rather capricious behaviour at speed. Motorcyclists at the time jokingly renamed the bike’s PMZ initials as “Poprobui Menya Zavedi,” or ‘Try to Start Me,’ a wry comment on the bike’s safety record. Numerous complaints and mishaps led to production being halted in 1939. Sadly for a bike that looks so good, it seems that the genius driving them forward was also their biggest weakness. Had it not been for his tragic and untimely death, Russians just might be riding PMZs to this very day. And as always, should you want to walk in the footsteps of Comrade Mozharov and take this piece of motorcycle history for a capricious little ride, simply contact The Motorworld by V.Sheyanov to find out how and you too could twist the throttle on a machine like this. Bucket list, anyone?