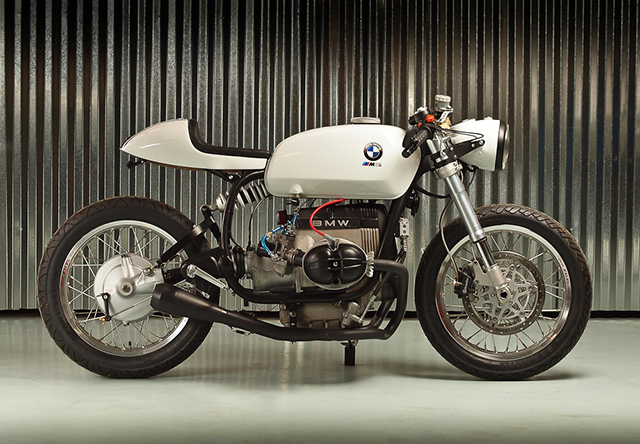 You won’t find two more different styles of motorcycle, than to compare a BMW to a Ducati. The Bavarian cycle is reliable and sensible like your grandpa, whereas the Italian machine is like your crazy cousin who keeps getting you in trouble in the pursuit of a good time. Somehow, Moto Motivo has managed to strike a healthy balance between the two, producing a cafe racer featuring the best parts of each. Starting with a busted ass 1972 R75/5, Johann and the MM crew have brought this bike back to life, repowered it, and produced a magnificent multicultural machine that even the builder himself wasn’t sure he could achieve. The build kicked off with a rather sad R75 bike, an extended period stored outside leaving the rims, suspension and chrome bodywork unserviceable. Seeing the potential in the frame, Johann picked up the bike and treated it to a Ducati mono shock makeover, a move which caught the eye of the current owner, who gave Johann the bike brief to build the bike as Johann saw fit. This worked for the builder, in his own words: “This was a dream build for me, Jim gave me instructions to build the bike as if it was going to be my own, but it had to be light and nimble. That alone was a challenge using a 1970’s BMW.” After stripping down the phlegmatic R75 motor, the MM workshop decided that the operation of rebuilding the 745cc engine and giving it more power wasn’t financially viable. So the project sat, until a stroke of luck had another customer roll in looking to sell an R100RS donor bike. Lacking it’s bodywork, the R100 had a reconditioned motor, which meant better ignition system and an oil cooler – already a leap ahead of the R75’s powerplant. The only downside to the bigger motor was that it was stored minus the spark plugs, allowing surface rust to accumulate on the bores. Remedying this, Moto Motivo took the engine down, boring out the cylinders and fitting new Pistons/rings. On reassembly, the cylinder head was treated to new valves and guides, as well as porting and polishing. To accommodate the Dellorto PHF 36 carburetors, a set of custom intake manifolds were fabricated, and the stock airbox replaced with meshed velocity stacks. Exhaust duties are taken care of a 2 into 1 stainless system, running Moto Motivo’s own silencer, ceramic coated in black. To give the Beemer that cafe racer aesthetique, the frame has been detabbed and the factory battery box hurled. The entire factory rear end is gone, Johann from MM fabricating an entire new subframe, incorporating a Ducati 900SS mono shock. To keep with the sporting look of the bike, the fibreglass duck tail was manufactured in house at Moto Motivo, incorporating the relocated battery lithium battery. On putting the bike together after the extensive frame mods, the R100RS front end was mounted, and found to be too long and too soft to achieve the low stance expected of a cafe racer. Raiding the parts bin, in an incredible piece of luck, Johann found a complete 900SS front end from a previous Ducati build. After fitting custom steering head bearings, all the standard factory fork components could be utilised on the build. The hybrid bike rolls on rims laced inhouse, the front hub from a Sport Classic. Finished in bone white, with obligatory GT stripes, the Beecati is a far cry from the sad R75 the bike started out as. Evidence can be found in the fact the bike picked up ‘Best in Show’ at the Raleigh Eurobike show, on the first weekend the owner had it. Which is fitting really. You couldn’t get a more European bike if you tried.