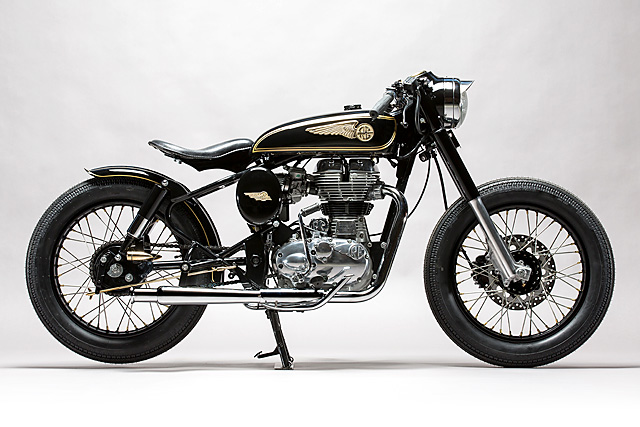 Some brands transcend their own industry and become part of a culture so linked that one simply goes hand in hand with the other. If you mention Motorcycles and India everyone’s mind is instantly drawn to the name Royal Enfield and their classic designs that have been around for generations. Enfield’s have been the transport of choice for the motorcyclist in India doing it in style, from the Brit’s who stayed behind after Independence, to the Indian Army and Police, Guy Martin on his epic adventure and our own Scott Hopkin’s high into the Himalayas. For Charlie Hallam and the Mid Life Cycles team from Melbourne, Australia, the RE Classic just made perfect sense as the platform for their latest custom and a chance to build a bike that not only looked incredible but could be easily replicated in a cost-effective manner for a limited production run. The result is this brilliant Royal Enfield Classic 350 wearing just enough of India’s most famous alloy to earn the name ‘Brass Rajah.’ [superquote]“Brass Rajah has many inspirations, including Royal Enfield’s own 1930s Isle of Man 350 racers.”[/superquote]

From the beginning the process was heavily influenced by everything that makes the Classic 350 great, vintage lines and that unmistakable upright single-cylinder engine; but the inspiration didn’t stop there. “Brass Rajah has many inspirations, including Royal Enfield’s own 1930s Isle of Man TT-entered 350 racers. Thirties-style inspiration also came from the BMW R5 “Hommage” tribute bike and the striking Hollis Type A. And there are elements of our own BMW R60/2, a customer’s much-admired BSA 350 single and of course that whole school of motorcycle design, the bobber,” explain the MLC team.

But to know exactly where to start the process they unpacked a brand new RE on the workshop floor and all looked at it, walking around to take it in from each angle. Then they simply began pulling things off, the design process made so much easier when the unnecessary clutter is removed. With all those influences running through their minds the goal was to make two significant changes, visually lower the bike and physically make it longer. To get the stretch in the bike they were looking for they turned to Andrew Hallam of Hallam Racing, you can’t just do a cut and shut and hope for the best. The swingarm is subjected to all sorts of violent forces and not only did Andrew extend the factory arm by three inches he did so ensuring the engineering integrity was flawless. With the bike now stretched they could focus on visually lowering the bike and on such a minimalist machine that means a change in the fuel tank. “The standard Royal Enfield Classic tank is nicely shaped in side profile, but our build required a longer, leaner, lower tank. We tried several possibilities, including some lying on the workshop shelves. None quite worked until we found a replica 1930s Norton tank.

With the build deadline shortening, it wasn’t till the box arrived and we sat the tank on the frame that we knew we had our solution.” To complement the tank and suit the 19-inch rear wheel to come later, a new guard had to be carefully stretched and re-radiused so that it would follow the lines of the taller tyre perfectly. That labour intensive task was taken care of by local TAFE master craftsman, Andrew, who truly hit it out of the park. To mount the new fender in a way that was both clean and to do justice to the endless hours of hard work that had been poured into it the decision was made to mount it in a way that leaves it almost floating over the rear tyre. The semi-hidden supports were fabricated by Paul Moneta of Fabwell who designed the pieces that give a truly flawless finish.

“The deep-dish leather seat was another no-brainer, as we’d already fitted the same seat to several customer Classic 350s and 500s, but this time we wanted to dispense with the standard springs beneath the seat.” Once again Paul was on hand to employ his fabricating genius to come up with a seat mount that in finished form causes the seat to float above the frame, suspended by an arch of steel that follows the curve of the rear guard. The changes to the bodywork alone take nothing away from the classic RE styling, but simply enhance it in every way with the build quality to such a level it appears to be a far more expensive machine.When the decision was being made on the fuel tank a set of BSA-style rear shocks were also ordered and are far more befitting of the bikes aesthetic than the exposed coil-over units that come fitted these days on a new RE. To match, the front forks were stripped of their shrouds so they could be painted and the continuity between front and rear is spot on.

The braking is one of the few aspects of the modern classic that cannot be hidden and a 280mm front disc clamped by a 2-Piston caliper takes care of the front with a small drum in the rear. As previously mentioned the rear wheel has gone up in size replaced by a 19-inch unit from a Royal Enfield Bullet 500. Both wheels were fully stripped so they could be powder-coated and have been rebuilt using stainless spokes and brass nipples. When it came to the rubber it was a quick decision, “As one of the brands we stock, the Shinko tyres were an obvious choice to support the thirties bobber look.” Powering Brass Rajah is of course the iconic single-cylinder engine, with its classic design and unmistakable sound that is known the world over. The modern incarnation of the 346cc single retains much of the beloved characterises of old while introducing enough in the way of new technology to be far more reliable. It’s no rocket ship with 20hp but that’s never been the point, the long 90mm stroke means there is effortless torque throughout the rev range and grab the throttle in any gear and it pulls away from close company. Providing the all-important sound track the stock factory header feeds rearward to a chrome cocktail shaker muffler to elicit the most of the single-cylinder’s signature throaty sound.

“Building a custom bike requires two things – a unifying central theme that defines the build and keeps it pure to the intent; and hundreds of decisions about details. From early on, we had wanted some of those detailed parts to be in brass to pay tribute to those early bikes and builders and to evoke the Thirties Art Deco era.” To achieve that goal more brass was discarded than fitted but it’s all about putting it in the right places. At the rear the torpedo-shaped turn signals are both brass and vintage in style and sit just above the brass brake rod that runs rearward with the new swingarm and is fitted up with an extravagant brass wing-nut. The controls are both perfect in their fit and vintage in style with classic sweeping bars fitted up with only the bare essentials and the speedo treated to a custom rim in brass that helps to age its modern face. The final piece in the Brass Rajah puzzle again required absolute commitment to the original goal. “We asked Glen Stevens to re-paint and pin-stripe the perfectly good Norton-style tank to stay true to our original design brief. And so we could use the outrageously curvaceous RE winged brass badges on the tank.” The end result is nothing short of stunning, if the factory unit has a utilitarian feel, Mid Life Cycles have stripped that away and created a highly desirable classic custom that wouldn’t look out-of-place up on stage at a Bonhams auction next to a Brough Superior. And speaking of competitive challenges, the bike has been entered into the inaugural ‘Royal Enfield 31 Day – Custom Bike Build Off.’ If you like what you see here, why not visit the competition site and register a vote for Charlie and the team?