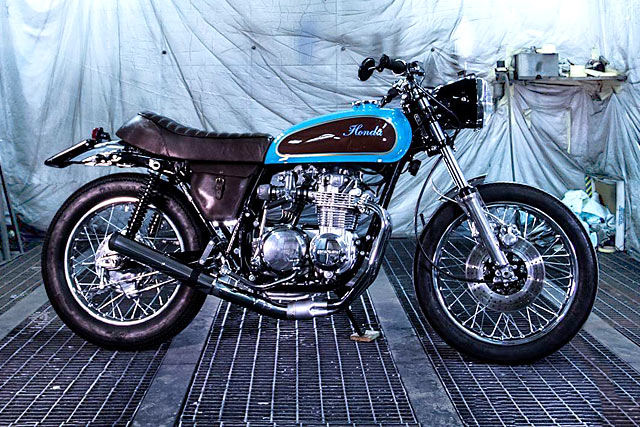 It’s easy to underestimate just how big motocross was in Europe in the 70s and 80s. In Italy, it seems you’d be more likely to find someone who didn’t like their Nonna’s food than find a custom bike shop without some connection to the off-road art. For the Soiatti family, it was a seat on a factory bike that marked the peak of their motocross addictions. And after they kicked that habit in the 80s, father Daniele started the Soiatti Moto Classics workshop. Thirty six years later and with his son now in the picture, here’s their latest build.

“My name is Alberto. Soiatti Moto Classics was created by Daniele Soiatti, my father, in 1981. In the 70s, he had been an official motocross rider, racing a factory bike for the Milanese SWM company. After his riding career, he worked for a couple of years in the official Moto Guzzi dealer network and then he opened the workshop”. Today, the Soiatti’s main activity is focused on the restoration of motorcycles, with their bikes regularly entered into prestige events like Lake Como’s Concours d’Elegance Villa d’Este. Thanks to son Alberto, they can still carry on their exclusive commissioned work from a range of Italian and international clients. So consistent and renown are their bikes, they have a regular monthly column dedicated to them in two of Italy’s leading moto publications.

“The bike is a Honda CB500 Four made in 1975,” says Alberto. “Surprisingly, the donor bike was found on a beach. The build was done for a client whose source of inspiration was a classic Porsche. In a way, the bike is a dedication to the famous German brand; the owner of the bike is lucky enough to also be an owner of a vintage Porsche Targa with blue paint and a brown leather interior”. The bike came to Alberto and Daniele in very poor condition. After a long period of neglect at the beach, it arrived badly corroded. They even found sand inside the cylinders. After the purchase of a second engine and a whole bunch of new parts, the thing was completely dismantled and rebuilt with new pistons, primary chain and transmission gears. Next, the frame was modified to remove the passenger footrests and clean up the overall look. “All the aluminium parts were polished, along with the rims. The headlight has been replaced with an old Ural unit. Adapting this new headlight with integrated instrumentation was probably the most complicated part of the build,” notes Daniele. “The saddle is the original, but it was shortened a little and re-covered in calfskin. The same leather was then used to create a matching set of tailored saddlebags”. “What do I like the most about it?” questions Alberto? “Probably my favourite part of the bike is its front end. With the double polished calipers and the drilled discs, the bike instantly got a more aggressive look that really sets it apart”.