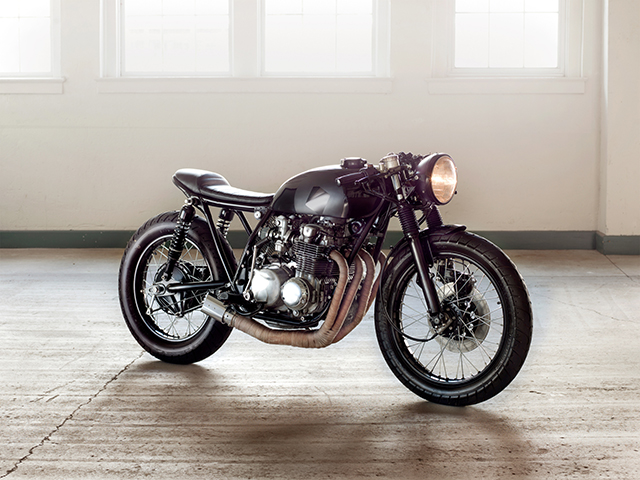 I admire the Canadians. They’re a resilient, resourceful people with a long and proud reputation of overcoming adversity. Whether it be thriving in the barren wilderness of the North, co-existing with man-eating bears or having to live alongside French Canadians, they always seem to make the best of the difficult circumstances the Gods have dealt them. KickMoto in Halifax, Nova Scotia continue this long trend of Canuck determination by producing this tidy little café racer. It’s their first commissioned build and if the quality of this 1978 Honda CB550K is anything to go by, it certainly won’t be their last. I say the bike required some determination because the three guys who make up Kick Moto – Jeff Shaw, Jordan Braun and Daryl Stewart – had their work cut out for them from the beginning. The donor bike was bought for $300 and came disassembled in plastic totes – which may have been convenient, because at the time of the build they didn’t have a shared workshop and all the modifications were carried out separately at each of their houses. And there was a bit of work involved… “The frame has been cleared of all unnecessary tabs and welds and has been modified in several places, including the rear hoop, the screen guarding the intake, and the electronics tray.” The guys from KickMoto explain, “We’ve shortened the fork legs, rebuilt the brakes, trimmed the top triple, rebuilt the wheels, and powder coated everything.” The electronics didn’t escape unharmed either, with the CB’s wiring loom paired down to the essentials. “The entire bike has been rewired with a slim lead-acid battery, allowing for kickstart only.” Which is only fair, considering their name. What impresses me most about the Logan CB550K is the amount of work carried out by the guys themselves. Many new bike builders, and even established ones will gladly send away parts to older, hairier specialists for wheel building, metal repairs, and ambitious invoicing but KickMoto seem determined to try their hand at everything. “The tank was in rough shape, and this was our first serious attempt at tank repair and paint,” they say. “The amazing result surprised the hell out of us. As for the seat, this is only the third that we have made and it was sewn up on a household Singer sewing machine.” That’s some pretty great work for a company at such an early stage. Look at the perfect fit between the seat and the tank – I have a $500 aftermarket seat on my Bonneville that’s so far out of spec I worry I could lose a testicle in the gap when braking. Tucked up nicely underneath the rear of the seat is the tail light unit, which was also scratch built in-house. The bike also has a few nice features like the ignition tidily moved to the side of the frame and a speedo tucked away behind the headlight. I think that all the work involved produced a lean, beautifully proportioned motorcycle. It’s great to see a fledgling company like KickMoto make a really nice, bespoke machine right from the beginning, rather than slowly working their way through the usual aftermarket accessories before tackling anything more ambitious (also known as ‘the Nitroheads ducktail seat’ syndrome). The bike looks cohesive, distinctive and very rideable. With their attention to detail and their willingness to try their hand at paint, upholstery and metal fabrication – and with their new workshop – it’ll be worthwhile to keep an eye on what these guys get up to over the next few years.