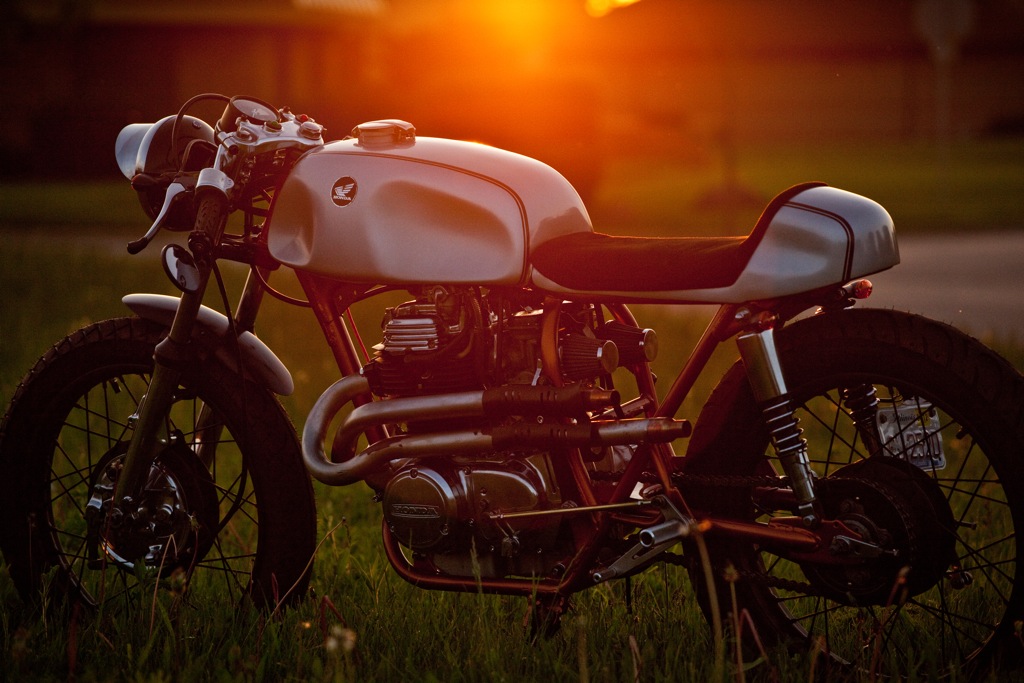 Living in Australia we sometimes forget how cold it can get in other parts of the world. On the recent Pipeburn ride I heard many grown men whining about how cold the early morning was in Sydney and it was only 16˙C (60˙ fahrenheit). So I take my mohair beanie off to guys like Aaron Ruse from Illinois who has spent the last American winter building a bike in freezing temperatures in his unheated concrete garage. Aaron is a young guy who recently decided it was time to learn some wrenching skills and build his first bike. “I got interested in motorcycles last summer as a way to learn about basic mechanics,” says Aaron. This interest quickly grew into a love for classic motorcycles. He was inspired by his uncle R.J. Ruse and his buddies who restore classic bikes, along with a new friendship with Team Hansan Racing’s Terry Naughtin, and set out to build a cafe racer last winter. “I found a beat up ’75 CL360 and a badly dented and rusted CB350f tank in a back junk yard of a local motorcycle shop and set to work”.

We’ll let Aaron describe the details of this one: “While in its decrepit state, I went through the electrical and mechanical systems enough to get it started and rolling around the block. Then began the tear down. Working solo in my garage over the next several months, I stripped each part off the bike and restored, repaired, painted and polished them. The dented and rusted tank was the first major project and chance to learn about sheet metal body work. Rather than pulling the dents out, I embraced them and accentuated them to become knee and hand dents. This process involved a ball tip hammer, some oak dowel rods, a bit of body filler and tons of patience”. “Once the tank was primed, I moved on to any part made of aluminum. Using a vintage buffing wheel from craigslist, I slowly worked my way through a mountain of tarnished, dirty parts. As the shiny and functional pile of finished parts grew, the frame finally exposed itself. Determined to take this project as far as I could, I cut off anything from the frame that didn’t make it go faster or help it stop. The concept was to strip the bike down the the basic components and celebrate the great geometry hiding under all the added stuff. Additional seat bracing, triple tree stops, rearset mounts, rear loop, battery box and license plate bracket were fabricated and welded with simple hand tools and a portable MIG welder”. “After unsuccessfully scouring internet vendors for just the right seat/tail, I decided to try my hand at fiberglass. Sculpted the tail piece shape from foam then laying up glass and finally sanding and filling to a final shape gave me a one of a kind tail that fits the contours of the bike perfectly. At this point, we were in the dead of a very cold Chicago winter and it was time for paint. My “paint booth” is a cleaned out portion of the unheated garage. Over the next several weeks, my very patient wife allowed me to keep all the parts in the kitchen while I dashed to the garage to spray small parts and frames; immediately running back into the warm house with wet part in hand to be hung off cabinet doors or doorways. New tires, rearsets, signal/break lights, and clip-ons were ordered from the helpful guys at Dime City Cycles while the paint dried. Assembly was the next task. Once again, the kitchen was the only logical location for such a project given the weather outside. Happily, despite poor planning on my part (I neglected to to a dry fit of all the parts before painting) the parts came together relatively smoothly”. Aaron finished the bike just in time for Spring. Ironically, Spring usually means rebirth and renewal, and that’s exactly what happened to this beat up old CL360 – it’s been completely reborn. And when the snow melted away to reveal the roads again, it was like a sign from a higher being to take some beautiful shots and send them to Pipeburn. Hallelujah.