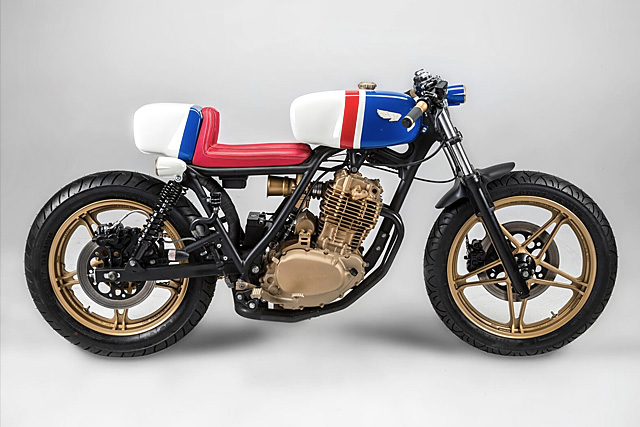 There is more than one way to skin a cat and for Scott Halbleib of H Garage he took a different path with this Honda FT500 than he normally does with his other builds. Even before he’d begun his Honda XT build that has long since been finished and shares a common engine with the FT this bike caught Scott’s eye given its cheaper purchase price and convenience of electric start. This wouldn’t be a rushed project, after its purchase other bikes would take priority and the FT would receive attention when the right ideas came to mind and time was available. So it’s been two years in the making but with plenty of time, a Facebook poll, some light bulb moments and the help of a few excellent suppliers, this race inspired urban Café Racer can now be revealed. Having admired the work of another builder, Scott wanted to make his frame as smooth and clean as possible and it’s worth zooming in to see just how good a job he’s done. With the bare frame on the table he got to work removing all tabs, brackets and the battery box before grinding and smoothing the metal left behind. The next step was a radical one for a bike with such a cheap purchase price but the results speak for themselves, every join in the frame was re-welded, grinded back and smoothed out. To make the most of this ultra clean look Scott then fabricated a small battery box and electrical tray that leave as much of the frames metal work as possible exposed. The rear of the frame has been chopped and plugged before the entire frame was sprayed in a satin black finish. The metal work is unlike anything you will ever see on a Honda FT anywhere in the world and it all started by trial fitting numerous fuel tanks until he found one that fit the bill. The winner was an Aermacchi unit from the Harley Davidson ownership period and it was just what Scott was after “The Aermacchi tank has such a nice design and keeps the look of the bike super slim”. The tank received some minor mods but it was matching it to the tail that got Scott thinking. Having lost a little interest in the Cafe Racer styling there was a design he wanted to try that sparked the inspiration for this round rear end. A tail-piece that not only had an integrated exhaust exit but also had an underside that matched the shape of the tyre. With enough chopping, shaping and welding the tail not only serves its new purposes but also matches the tank perfectly. The next challenged was a seat that would tie the two new tank and tail elements together and Scott does a great job describing exactly what he had in mind and how it was achieved. “Rather than capping the tunnel on the tank, I decided to use it as part of the design. The tunnel on the tail paralleled the shape of the rear Pirelli so I thought the tunnel from the tank should be visible as well. I would design the seat to parallel the tank tunnel. The seat pan was formed then channelled in the rear to allow clearance for the exhaust, then various density foams were used. The centre was then hollowed out to allow hollow foam tubing to create the cylinder that parallels the tunnel. I put Ginger at New Church Moto to the test for upholstery”.

Then one night Scott awoke with another idea he wanted to try, incorporating the headlight into a vintage microphone to act as its surround. Weeks of hunting on eBay and he finally found just the old microphone to do the job, fitted up with a high intensity fog light it makes for a very cool and functional piece. Then Scott decided it would look brilliant replicated on the rear, so back to eBay and this time finding a matching mic took months but he finally got his man. For an ultra clean look the wiring runs through the frame, even for the rear indicators which are mounted to the holes were the factory rear footpegs once would have been. Then more months passed as Scott’s internal monologue ticked over thinking about a colour scheme, this was all resolved when a Facebook poll helped him settle on the Honda racing colours of Red, Blue and White; with Scott drawing up the design and Bobby Fulkerson laying down the paint. The now all gold engine is the same as that fitted to the XT Scott had already built with the added bonus of receiving electric start on the FT version. The lightweight grunty single is finally getting the recognition it deserves in custom builds as it packs more torque at lower rpm than the rival 500cc single fitted to Yamaha’s SR500. To put a little more pep in its step Scott fabricated a new carburettor mount which holds in place a Mikuni 36mm round slide carb. Feeding air into the single and giving a rorty sound is the massive velocity stack from Speed Moto company, but it doesn’t make anywhere near the sound of the seriously trick exhaust. Starting with a new header pipe from Thumperstuff, Scott then fabricated a MotoGP style exhaust that snakes its way under the engine before running north past the swingarm where it enters the tail section. The pipe work is heat wrapped where necessary and finishes off through the purpose-built tail section with a small Cone Engineering muffler. But it wasn’t the engine that was first to receive lashings of gold paint, one of the first decisions made on the build was to paint the wheels in the hue like an old school NASCAR. With the wheels rubbered up in Pirelli Sports Demons some extra braking was added to the build with braided brake lines and a new Rizoma rear master cylinder reservoir. Vortex Clip-ons replace the factory bars with new levers and master cylinder working alongside Motogadget switches. They join the push buttons that have been recessed into the triple trees and all the wiring and relays were meticulously routed by Chad Francis of Retrowrench.

The practical little Honda never really took off with just a two-year production run in 1982-83 but perhaps if the designers had Scott’s patience and creativity they could have brought to market one hell of a better ride. It’s a thousand dollar motorcycle with million dollar fit and finish from a talented builder who continues to surprise with unique designs and brilliant execution.