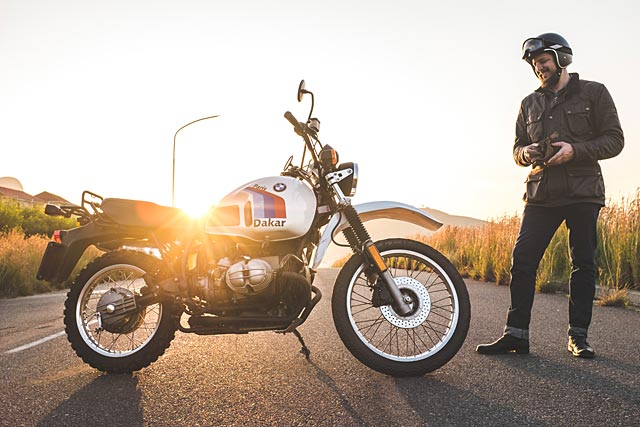 Time for another instalment of our regular ‘Moto Photos’ stories. Tonight it’s South Africa’s turn in the spotlight; specifically Cape Town’s crack lensman, Devin Paisley. His recent shoot for local shop Hutchbilt really impressed us. So much so, we wanted to see what other goodies he had in his camera bag. So here they are. Enjoy. Can you introduce yourself?
Hi! I’m Devin. I am lucky enough to call Cape Town, South Africa, home. If you haven’t been here yet, best you book a flight asap. We’ve got some of the world’s best riding on our doorstep. I settled back here after 6 years traveling Asia and Europe working as a model. My father was a photographer in the 70’s and 80’s, so photography is in the blood; my brother is a cinematographer. I picked up my first decent camera in 2007 and started documenting my travels.

Why photograph motorcycles?
To be honest, I think motos chose me. When I moved back to Cape Town the custom bike scene was on the up and up so a mate and I started building bikes. That’s when I started shooting motorcycles and it kind of snowballed from there. After I figured out building custom bikes wasn’t feasible, I started a new project called The Woodstock Moto Co; it’s a community-based DIY motorcycle garage aimed at bringing people from all walks of life together around bikes. The community that has developed has been a major influence in my journey as a moto photographer. Do you shoot any other subject matter?
Yes. I shoot a wide variety of subjects from travel and portraits to property, but I prefer shooting machines so I’m moving into industrial process photography. I enjoy capturing a production process that is not usually visible to the end-user. I’ve also been documenting an artist friend’s aluminium smelting project which is fascinating. What’s your go-to camera and lens?
I shoot on Nikon DSLRs. I have a D750 and my old tank D700 for the dirty work. Why? That’s like a KTM vs BMW argument, but my father used to shoot on Nikon and has lots of old glass so I could use it on my camera. Lens-wise I shoot on primes most of the time: a 50mm f1.8, 85mm f1.8 and an old manual focus 135mm f2. I also have a 18-35mm wide. Primes are usually sharper and faster than zooms but they also force you to move around to find your shots. I also have a small Fuji x100t as my pocket camera, which has blown me away. What’s the best and worst things about shooting bikes?
I think the best thing is seeing the connection between man and machine – and particularly with motorcycles – it’s such infectious fun. I try to shoot in a way that makes non-moto people sit up and take notice and pique their curiosity in something they always saw as dangerous and serious. It also allows me to ride some great bikes I would never have the opportunity to own.

The worst thing? I guess it’s the money. The motorcycle market in South Africa is tiny (which is surprising due to the year round riding and amazing roads) so getting the motorcycle brands to trust you with a decent budget to produce top-notch content is a real struggle. I think this ties in with what Stan Evans was saying in your last Moto Photo feature.

Looking at some of the local bike brands social media accounts is ultra cringe-worthy when the opportunity to expose our epic roads and moto-heaven is so evident. I’ve started looking overseas for clients and recently shot some images for Rev’it, a great company that I think is in the lead when it comes to their attitude to motorcycling, oh and of course ICON.

Where do you see your local moto scene going in the future?
Motorcycles are pretty expensive in South Africa, making them a luxury item. Through the Woodstock Moto Co I am trying to promote “Motorcycles for Everyone” by providing an open and inclusive community of bike lovers that is not intimidating to people who don’t own a bike yet. We also provide classes in basic bike maintenance so that people can buy a fixer upper and breathe new life into it. I think motorcycles provide a practical solution to three of Cape Town’s biggest car problems: petrol, parking, traffic.

Regarding popularity, I think people are realising that an adventure motorcycle doesn’t have to be a large capacity touring beast. Most of my friends ride small capacity dual sport bikes, and those that don’t often miss out on the freedom that small, light bikes provide. What’s you’re favourite bike from the past few years?
That’s a tough one. Internationally, the one that kicked off my interest in custom bikes was Wrench Monkees Gorilla Punch CB750. The lines were just so right and proportions were bang on.

Locally we’ve had quite a bit going on for such a small scene, Octavia by Hyde Designs, Race8 by Wolf Moto, Johnston moto’s projects but the one that blew me away was Skyway by Hutchbilt. When Jeremy first sent me a few snaps before I shot it – I couldn’t quite get my head around it. But then spending quite a bit of time on set with it – the closer I looked, the deeper the detail and engineering went.

It is a fascinating build which took him 2 years and he persevered through some pretty heavy obstacles. It was pretty polarising too, which I think is good for the scene. I’m bored with seeing the same recipe applied to BMW airheads.