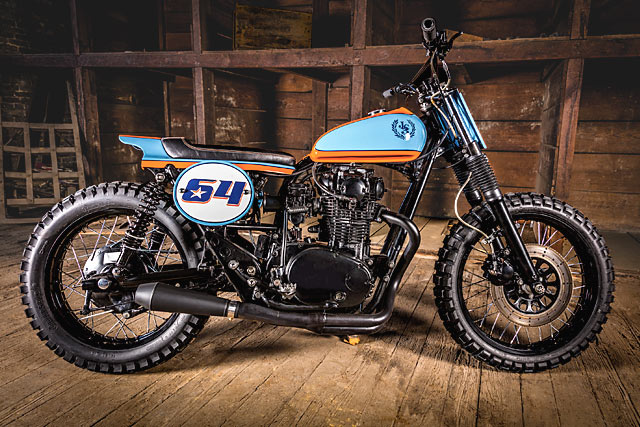 Last September a friend’s father contacted me about a commissioned build. He had a 1983 Yamaha XS 650 Special that a previous owner had already modified quite a bit. It needed a little mechanical work, so it hit the Retrowrench side of the shared space first. Chad Francis got the basics working properly. Then I met with the client and he informed me he only had a minimal budget. He just wanted to freshen the bike up and have it repainted with the Gulf color scheme, the number 64 (which his son races under) and the JC3 emblem, which is in memory of his daughter. So I rolled up my sleeves and got to work. As soon as I had the bike disassembled, I realized that it needed more than just a freshening up. If we were going to spend a considerable amount on the paint job, I needed to convince the client that we should tear the Yamaha down and do it right. After a few weeks of back and forth, looking at numbers and him realizing there is just no such thing as a budget build (unless maybe you’re okay with the rat look), he had committed to a complete and proper build-out. The bike was stripped and we started off researching gas tanks. We looked locally around Magnum Cycles and PVP Cycles, borrowing and test fitting tanks until we settled on one for the build. That was the starting point for a full concept to present to the client for final sign off. The bike also came in with the hideous 64 spoke front wheel, which I planned on replacing with a new set that had matching front and rear diameters. So with that in mind, I got to work trying to come up with a concept. I was really struggling to mock it up on the computer, so for the first time in my career I went ahead and started on the fabrication without a concept signed off. The Yamaha GT80 tank that we chose was very small, so I had to start bending metal to determine what I wanted the seat pan and tail section to look like. The tank was no wider than the frame, so I decided to expose a portion of the bike’s backbone, keep the seat pan wrapped tightly around the rear subframe and then taper it out to the tail. I wanted to keep the overall look of the bike as narrow as possible, so the seat and tail didn’t overwhelm the small tank. Luckily the better part of a week was not wasted, as the client came by and loved the new direction. It was great news because with all three of the shop’s bays occupied with client builds, I couldn’t afford to waste any time. The tracker was then photographed with the tank and tail. Everything else, including the paint scheme, wheels and exhaust was mocked up in Photoshop and sent to the client for approval. I’ve seen a lot of bikes with the Gulf scheme and think it’s a tough look to pull off. So I created multiple variations of the scheme with various levels of blacked out components to see how it looked. In the end, we both agreed to go ahead and black everything out to balance out the seriously bright color combo we’d chosen. The bike was then completely disassembled and all the necessary frame modifications were made. Mostly it was just cleaning up what had been done to it before, adding some brackets and a mounting point and then moving the battery box slightly. Then all the parts were cleaned, stripped and sent off for powder. Next the number plates were sourced, a face plate was made, and mounting brackets for all the plates and the LED headlight were fabbed up. Following this, new handlebars, controls, hidden switches, dirt bike pegs, velocity stacks, fork gaiters and steel braided brake lines were attached. Then it was seat time. This one was a little tricky in that it needed to widen out as it approached the tail but it also needed to work in with the concave panels in the bike’s tail section. I just kept sanding a little at a time, stepping back to look, then sanding some more until it lined up correctly. Then I called the queen of motorcycle seats, a.k.a. Ginger at New Church Moto, to knock out another precisely upholstered piece of art. I never have to worry about the seat once it’s in the mail, and that’s an amazing resource to have in this business.

Then it was time to send it out for paint; I chose a new shop recommended by a friend. We decided to do a combination of paint and vinyl to try to keep costs as reasonable as possible, but it still was a considerable line item on a pretty damn tight budget. It took a couple go-arounds to get the vinyl right, but as you can see the paint came back very nice. It was getting close to final assembly time, but we had tapped out the budget, and the client had suggested we just put the stock wheels back on. ‘No can do,’ was my three word reply. IF we went down that path, we were going to have a really nice bike so long as you always held your hand just below your eyes when looking at it. I had found the hubs I was looking for (36 front and back) just a little over an hour’s drive away, and I had also found out that the ‘Mike’s XS’ shop had black 18″ rims and spoke sets that were very reasonable. So I told the client that if he’d make the trip to swap out the hubs, I’d eat the cost on the parts and labor to build out the wheels. He agreed. We also went ahead and bought some basic black shocks while we were at it, just so we’d have the bike look complete.

Four months later and the tracker is all done. It’s minimal, it’s clean, and it really looks the part. It’s always tough to suggest that a client spend considerably more than what their bike is worth to customize it, but in this game you can’t really cut many corners. Costs are costs, and skilled labor doesn’t come cheap. In the end, if the client loves it and feels like his money was well spent, then I feel like I’ve done my job.