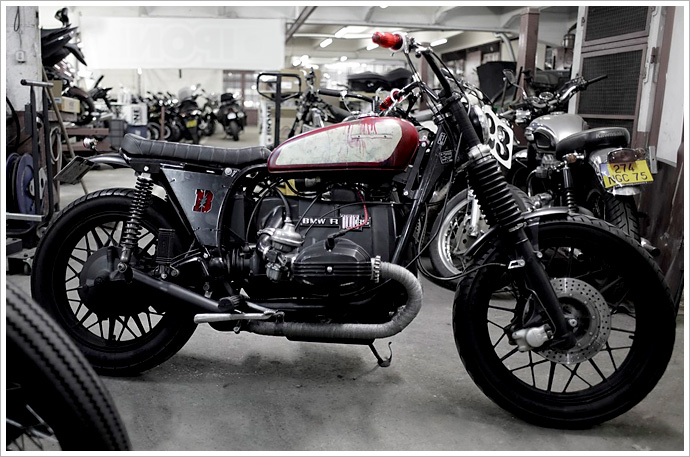 As 2011 draws to a close, it’s time again for our second annual top 10 list – or more correctly the nouveau-fangled “top 11” list as this year we’ve decided to include an editor’s choice for the bike Scott and I thought could do with a little repeat viewing. In case you’re wondering, we picked them by looking at the bikes with the most comments and then threw in a little personal preference magic. We hope you like them. First up is the rather controversial Blitz BMW we featured in March. It generated a veritable flood of comments including a few essays, though it’s not often you see the words “hipster douche bag cool kids” in your average English paper. Looking back, we’re not sure what all the fuss was about – tell us you wouldn’t like to find that in the garage every Sunday morning. More At number 9 we find Troy Helmich and his amazing Honda “Willow”. The bespoke bobbed board track racer was a very original design and unlike the Blitz bike it garnered nothing but admiration from you guys for its copper detailing and beautiful yet restrained pinstriping. The fact that Troy looks like he owns a heap of guns probably didn’t hurt, either. More At number 8 is (oddly enough) another bike with a tank-under-backbone design – Kendall Custom’s ’52 Thunderbird. Created by Kendall Lutchman, it featured more than a few totally amazing details; check out the exhaust, tank, and WWII Ford suspension parts that were used to make the bike’s frame. Also note the cool suspended seat design. Damn. More Along with Classified Moto’s amazing Yamaha XV 750 (which unfortunately was posted in the last few days of 2010 and therefore had to be excluded from the list), this bike marked a noticeable trend towards customising the more eccentric Japanese bike of the late 70s and early 80s that we noticed this year. Chris Tschiffley is not only a great bike builder (obviously), but we began shooting the poop with him after we featured his bike and can testify that he’s an all-round great guy who we genuinely hope we can work with again in the future. More

This one was a veritable “bolt from the blue” that we posted expecting nothing more than our average 20-or-so comments. 66 little nuggets of wisdom later we had ourselves one of the most popular bikes of the year. General consensus was that the idea of taking the “Zero” look and applying to a Japanese v-twin was a stroke of genius. And how could you dislike a bike made using parts of a Samurai sword? Just ask “Websys,” ’cause that’s exactly what he did. He’s crazy, I tell you! Crazy like a snake that has been cut, allowed to recover, and then cut again when he was least expecting it… More What’s not to like about number 5? It’s a balls-to-the-wall Honda CB 750 with a no-nonsense attitude from our good mate Paul at Evolution. Bad ass seat? Check. Killer stance? Check. Exhaust that can deafen a cop at 50 paces? Hell yes. Brings to mind the line that your helpful, local fireman always comes out with; “get down low and go, go go…” More This GS 1000 was moving in similar cool-as-fark circles to the CB, but strangely enough it was doing so while carrying a designer Italian handbag as a seat. World’s best re-purposing of a useless girlie thing since the slingshot made from dress elastic? We like to think so. More Into the top three and again with the Evolution genius. This Harley was Paul’s personal “statement of intent” bike, designed to be a rolling business card advertising just what his dirty little man-hands could do in anger. Bespoke CNC’d forks. Blown engine. Killer metal flake. Job done, McKinnon. Job done. More In at number two is another contentious entry in the form of Paul Dutra’s ’75 Honda Goldwing. With as much Machiavellian shenanigans going on behind the scenes as divided comments in front of them, it was always bound to be a discussion magnet. And it bloody-well was. More We found her at a Deus show being criminally overlooked and she’s gone on to reign supreme as the bike that defined what “modern cafe racer” really meant. If Scott or I had a dollar for every time we’ve introduced ourselves as “the guys from Pipeburn” and been greeted with the response “blah blah blah that Bonita bike” we’d both have about $10 or $12 dollars. But you get my point. Peruse her lines and inspect her details; you’ll not find a misplaced detail or awkward placement anywhere on the thing. Sheer design poetry, we say.  More Not so many comments on this one but it’s the bike that never fails to impress us, even on repeated viewings. If there’s one shop we’ve got our eye on for 2011, it’s Pat Dolan’s Sportsman Flyer Company. All you need is the bike you see here, and an illegal night visit to your local velodrome and those long-nurtured board track racing fantasies you know you’ll never satiate will be well and truly, er, satiated. More