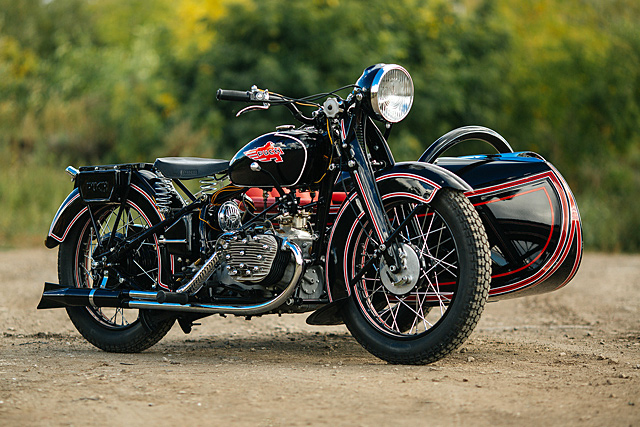 We love featuring bikes from Russia’s Motorworld because each and every one is like a script for the next Indiana Jones movie, just without the aliens and the flying refrigerators. Naturally, this amazing example of pre-war mechanical mastery is no different. One of only a handful of remaining examples, this machine has survived innumerable bullets, bombs and fascist bad guys to emerge looking like it was made only yesterday. Meet the Puch P800. In the midst of the false calm between the two World Wars, the then twenty-nine-year old Puch bicycle, motorcycle and moped manufacturer was merged with Steyr and Austro-Daimler, forming the Austro-Daimler-Puchwerke. By 1934, its innovative designs and quality handiwork saw it become the largest motorcycle manufacturer in Austria and again undergo a merger, this time with Steyr-Werke AG to form the Steyr-Daimler-Puch conglomerate.

Two years later and at their peak both creatively and financially, they created the P800. It’s a clear and impressive statement of just what they were capable of. Clearly, Austria’s reputation of being the most technologically advanced country in the world during the 1930s wasn’t far off the mark. A gorgeous, powerful and unusual motorcycle, the Puch P800 was equipped with a 4-cylinder boxer engine that was capable of propelling the bike to speeds of up to 125 km/h (75mph). Despite the fact that the model was designed for civilian needs and police, its increasingly positive reputation meant that it was soon drafted into use for the Austrian army and was later happily adopted by the transport-hungry Wehrmacht. [superquote]“The 4 cylinder power plant was neither a V4 nor a perfect flat four”.[/superquote]

The P800 was available in both two and three-wheeled variations, which was unusual for motorcycles of this age and type. But the most interesting feature of this model was, of course, its engine. Fired with a battery-type ignition, the 4 cylinder power plant was neither a V4 nor a perfect flat four, as it used an ‘almost flat’ 170˚ angle to space out the opposing cylinder banks. The carburetor was placed centrally above the engine crankcase to supply its fuel & air mixture evenly to both sides and the exhaust pipes protruding from the front and the rear of the block were connected with silencers as they passed the rear wheel. The engine’s lubrication system used a dry crankcase, with the oil tank placed under the seat. The generator was located behind and to the left of the engine and was powered via a crankshaft drive. Clutch duties were carried out inside the rear wheel’s hub through a four-speed manual gearbox with a chain drive on the left side of the bike. Yes, you read that correctly; the friction coupling was not between the engine and the transmission, but inside the hub of the rear wheel. And it’s a multi-plate clutch, too. The mind boggles.

The engine is packaged in a hybrid tubular/forged frame, which gave the motorcycle an attractive and at the same time quite a practical look. The front forks were made of stamped sheet steel in a girder arrangement with two cylindrical springs and a friction damper. Unsurprising for the time, the rear suspension was a hardtail. After the annexation of Austria by the Nazis in early 1938, Puch concentrated on the production of smaller motorcycles predominantly with two-stroke engines. As with the recently-featured Tornax, this was the result of the global financial crisis of the 1930s, causing a sharp drop in demand amongst the civilian population for the relatively expensive P800 and cut-throat competition from companies like Zündapp and none other than the good old Bayerische Motoren Werke. Luckily, production requests from the German military machine seemed to be increasing daily. Funny that. So with Europe’s descent into war in the late 30s, the release of the P800 stopped at around the 550 unit mark. Far from being safe, many of those bikes were subsequently confiscated by the German army, and then destroyed in the bloody battles of WWII. At present, there are no more than 90 examples in existence. It’s little wonder, then, that the P800 is considered to be one of the most rare, classic and collectible of all the Puch masterpieces.