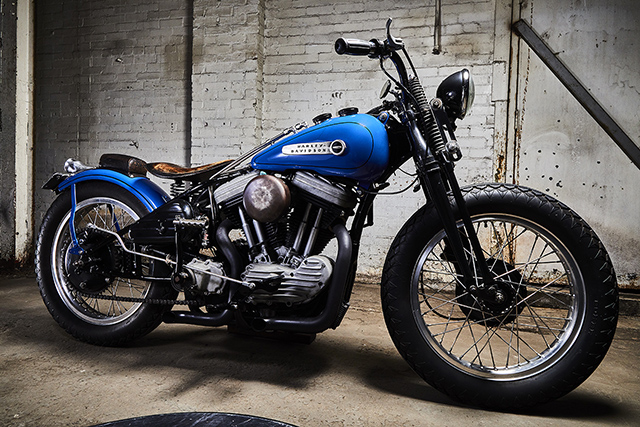 It’s not hard to imagine going to the Handbuilt Motorcycle Show in Austin and coming away inspired to build a custom bike of your own. But while most would be drawn to the endless number of incredible bikes crafted by the world’s best builders, it was inside the Wall of Death that the idea for the machine before you was born! Forged together from a 2002 Harley Sportster and a vintage Harley WL it’s the brainchild of Michael Alton, roaming the roads of Texas where it’s known as Taranis. 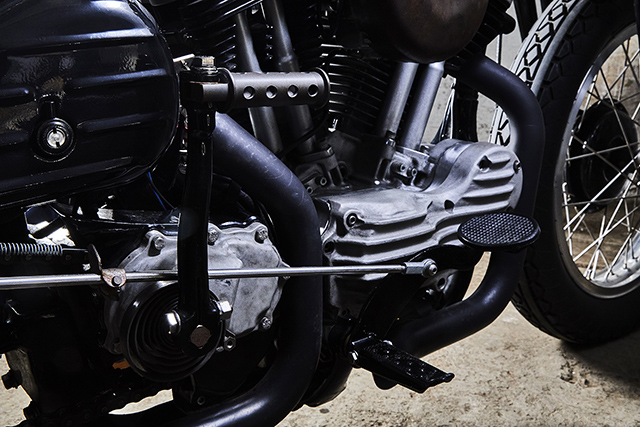 The name comes from the Celtic God of Thunder, whom with a big beard and a thunderbolt in one hand and a wheel in the other is just the sort of guy you can imagine calling this bike his own. “Witnessing the Wall of Death, I decided I wanted a bike that looked like the Indians they rode. Well I couldn’t find an Indian in my price range, but I did find a Sportster and decided that I wanted to somehow fit it into a WL 45 frame, of sorts. Everyone told me it couldn’t be done, but I thought it could,” Michael smiles. With the Sportster 883 in one corner and a rough WL frame with some assorted parts in the other, Michael got them both stripped down so he could begin the task of melding them together. “I cut out the lower subframe and merged it with the top section of the WL frame.” he explains. What you get is the Sporty frame cradling its own engine, with the exposed areas of frame taking on all the form and function of a bike from more than 50 years earlier. 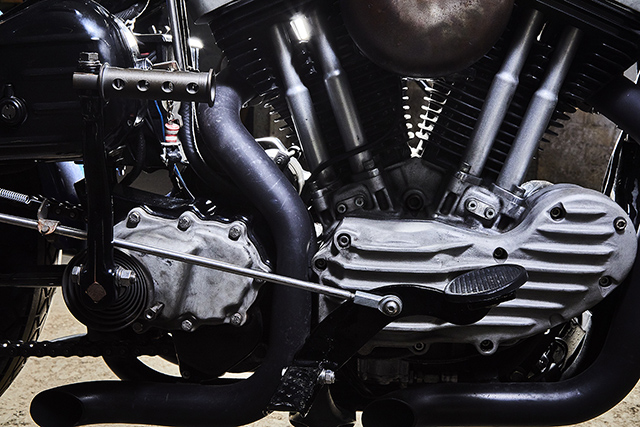 With the alignment triple checked and everything welded into place the result was a 883/WL that Michael could then build around to create the exact look he was after for the rest of the bike. To get it rolling a vintage springer front end was the perfect way to capture the WL feel. But for it to work and still keep the bike looking level Michael had to shorten it up and ensure all the parts were still functioning correctly for a safe street bike that could be ridden hard. 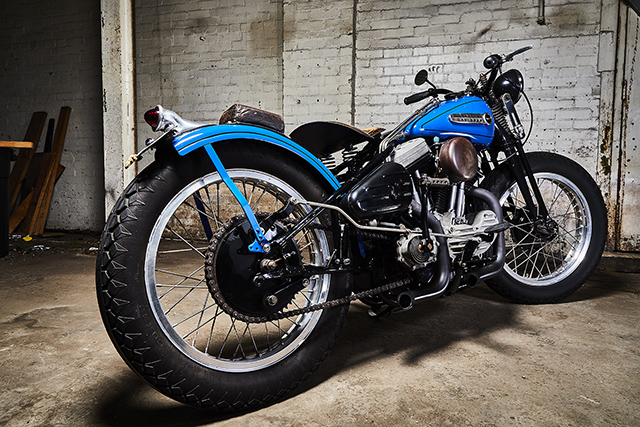 The vintage hub with drum brake is blacked out and bolted to the springer to give an entirely mechanical front end, there’s no hydraulics here, and perfectly replicates the old Indians used on the wall of death. The rear end also uses a vintage hub, with both ends laced up to new rims before being decked out in a set of classic Coker tires. Now the frame and hubs, along with their brackets could be given a coat of black so that everything had a uniform factory finish. 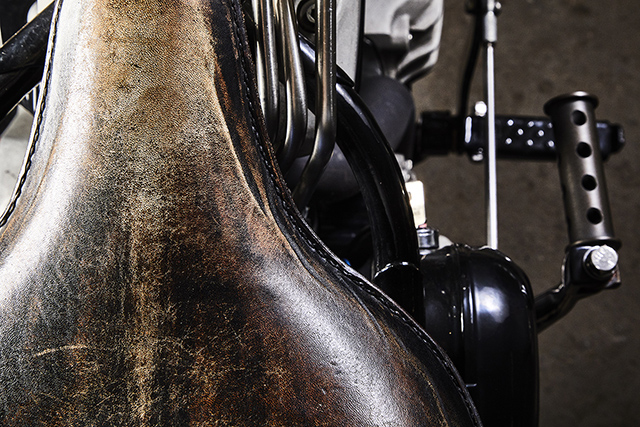 But you can’t make a bike look like something from the ’40s with a new Sportster tank, so it was into the Harley parts bin to find a solution. As Michael explains, “I then took a split bobbed Shovelhead tank and had a buddy of mine, Derek Mckenzie, turn into something that resembled a WL tank, but with an oil section added to it.” For the rear Michael narrowed a WR bobbed fender and made a seat pan before doing all the leatherwork on both the rider seat and pillion from a glorious old school hide. The controls are possibly the coolest part of the bike, giving the true hands-on experience of what it’s like to ride a vintage machine. “I customized a set of WLA foot controls to look more like a set of WR controls and then picked up a Led Sled foot clutch set up and customized it to fit into the scheme of things,” Michael tell us. Before finishing out the look with a bunch of EMD vintage bolt-ons, a cut down battery box, WL style grips and bars, and an old school Bates headlight. 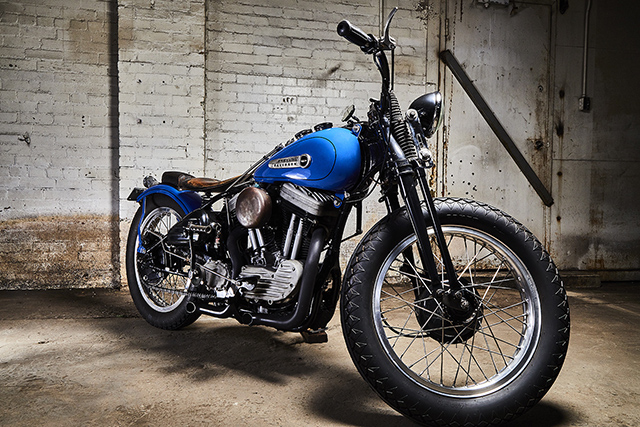 The custom individual pipes that run close to the frame and vintage air cleaner take the 883 engine’s appearance back decades. “I wanted this bike to look as if it was factory-made, and came off the showroom floor in 1946, but with a modern-day powerplant.” So with the help of Jason Small, the guys painted the bike a factory option Blue from ’46. 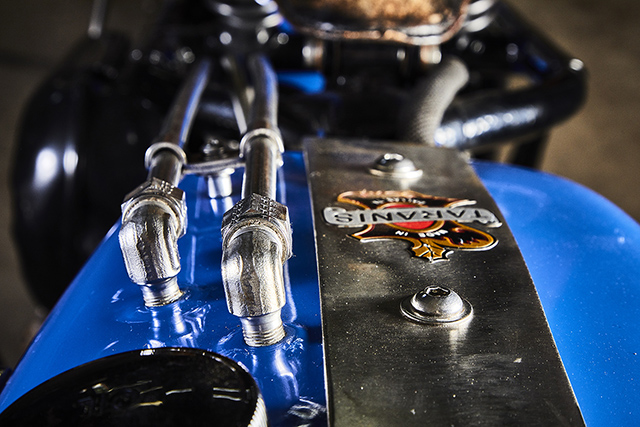 The final touch is the Taranis inspired shifter that Michael made himself and a big thanks goes to his friend Isiah Booth who stuck by his mate even when the ideas seemed crazy. You might think the finished item is just a looker, but Mr Alton loves grabbing a handful of gears, already putting 5000miles on the build and proving his Frankenstein creation checks the box of both form and function. 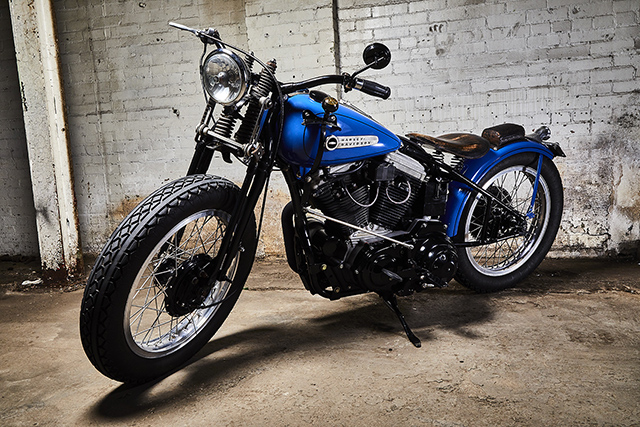 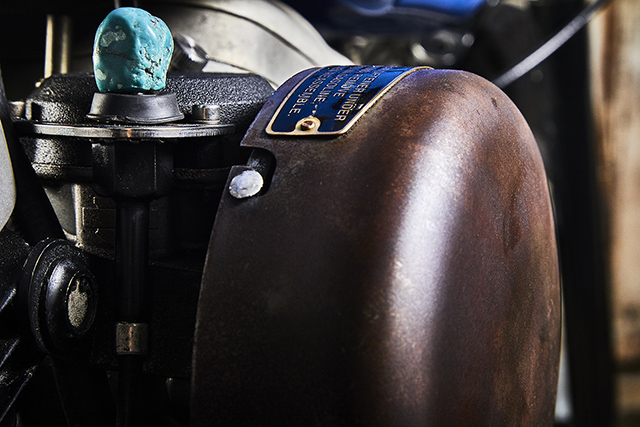 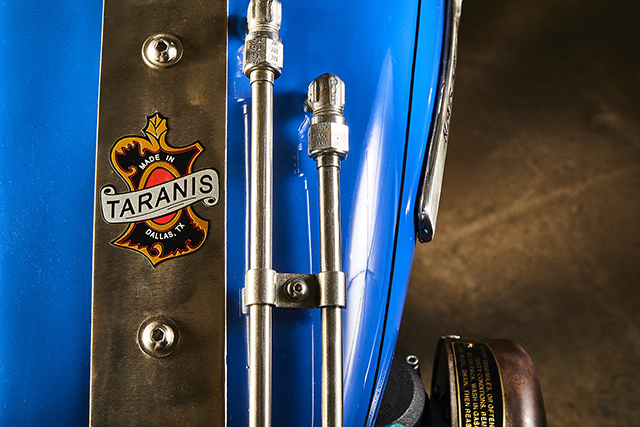 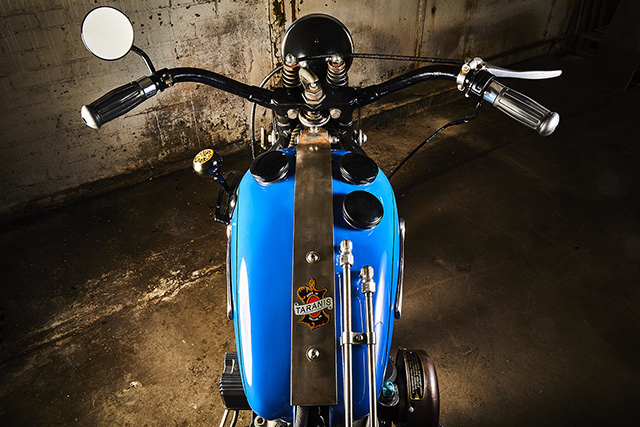 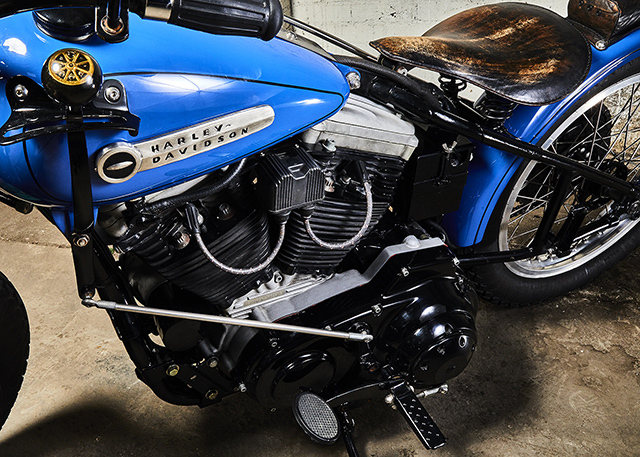 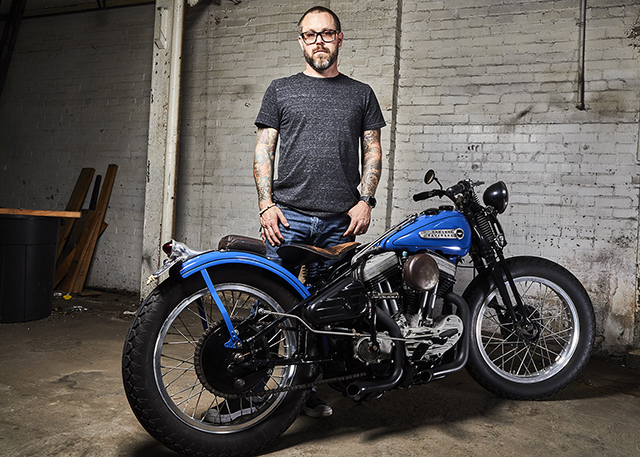