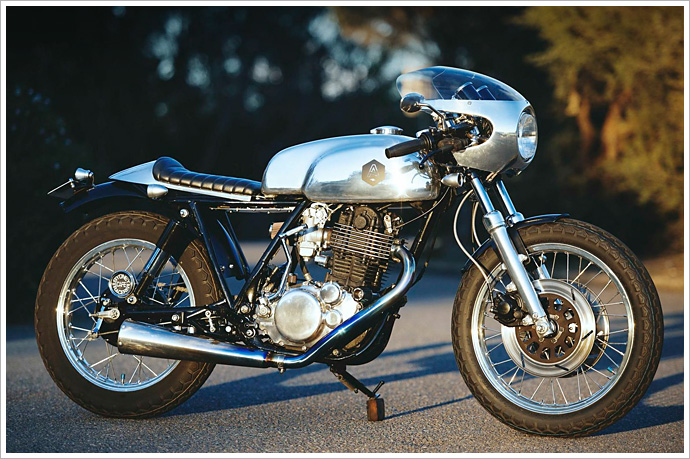 Over the years I have probably built more than 1000 bikes in my head. I look at my two motorcycles sitting in the garage and constantly strip them down then change their seats, tanks, tires, speedo, shocks, exhaust, colour scheme and even their grips. Most of the time I only run with a fraction of the modifications that go through my mind, but I do love thinking about all the possibilities. The latest build from Addiction Customs is the bike Nick has been thinking about for over three years. “Some bikes I think we spend years building in our heads” says Nick. “The Manxy Racer is one of those for me.” So after thinking about this bike for years, Nick couldn’t be happier getting it out of his head and onto the asphalt. We thought we’d let Nick get the full build story out of his head as well: “Every year I watch the Isle of Man TT with pure excitement and anticipation, and some time ago it got me thinking about the old Manx Nortons of the 1950s that dominated the TT. For me, there is no better single than the stripped down race styling of the thumper Manx, and so for this, my third complete bike build under the Addiction Customs brand, I wanted to build a bike that paid tribute, a nod if you will, to the classic Manx Norton. At least that’s where my thinking started. After selling The Addict in February I built a second bike, and re-worked a third, but all the time, I had nothing to ride for myself. The Manxy Racer was a bike that I had begun collecting parts for, and shaping in my head for the past couple of years, and I needed a new showcase bike, so in March I started to strip down this 1983 SR500 that I’d imported from Japan some months earlier. It was really rough; rims were crusty yellow with a thick layer of cracked clear coat, frame had rust here and there and it was a long way from roadworthy with bad brakes, bearings, seals, tyres, almost everything! One of the first things I did was fit up the alloy manx style tank. It was one of those pieces I picked up last year and it knocked around my workshop wrapped in bubble wrap all that time. The alloy fairing was a similar thing, so I threw it on just to get an overall line to work with, then I designed the seat pan and cowl based on my height and riding style, and sent the dimensions off to a fabricator to begin their work. I’d really love to be able to say I made it myself, but my tiny workshop just doesn’t have room for an english wheel. The tank is 6 litres more than the stock tank, just the thing for long rides, and it dominates the aesthetic, so as the project progressed I found I wanted the bike to feel like a Manx cafe racer; a bit less race and a bit more cafe, so I took artistic license, and what you see here is the finished product.

Anyway, while the seat was being made, I pulled the engine out, and began working the subframe and tail loop, bending and welding it all up to give the flat seat pan and cowl a rake up at the back. I didn’t want to compromise ride height and have to raise the springs, nor lengthen the cowl to clear the rear wheel travel. I fabbed up all the mounts and de-tabbed the frame and continued to source and order bits and pieces for the build. The all-titanium manx-style exhaust from Over was another one of those things I’d picked up a while back, so I cracked open the muffler and removed the restrictive baffle and replaced it with a perforated pipe and re-packed it with glass packing. The result is a raw thumping note to wake up the neighbours. The engine got a serious clean up and treated with a VHT primer and wrinkle-black engine enamel, giving it a vintage feel. Keihin CR38 smoothbore carb was chosen over the more popular FCR and braided oil line with ground and polished case covers completed the motor. Meanwhile the seat returned and I finalised the fender and indicator mounting points, welded everything up and sent it off to be sandblasted and powdercoated. I spent hours sanding back the wheels, polished the rims, painted the hubs satin black and laced them all up with stainless spokes and TT100 GP tyres. New brake linings, bearings, and seals all round and the front forks were completely rebuilt and shaved and polished, adding Ikon custom progressive springs up front and custom rear shocks with vintage shrouds. I decided to modify the front end for a dual slotted disc setup with a second caliper from an XJ750 (I think). Braided stainless brake lines made to measure and both callipers and master cylinder got completely rebuilt with new pistons, seals and stainless banjos.

I completely re-wired the bike with battery eliminator, new gauges and lights of course, mounting individual LED warning lights inside the gauge mount, and giving the cluster a slight rake back towards the rider.” Nick built this bike as his personal ride, so it’s no surprise he tells us “I’m stoked with the finished bike, and am a very happy customer!”. The traditionalists might say the alloy fairing doesn’t belong on a Manx design but it’s one of those things Nick just wanted on his bike. “The bike pulls hard, sounds wicked and stops better than any other SR I’ve ridden so I couldn’t be happier.” We look forward to seeing what comes out of Nick’s head next – just hope we don’t have to wait another three years.