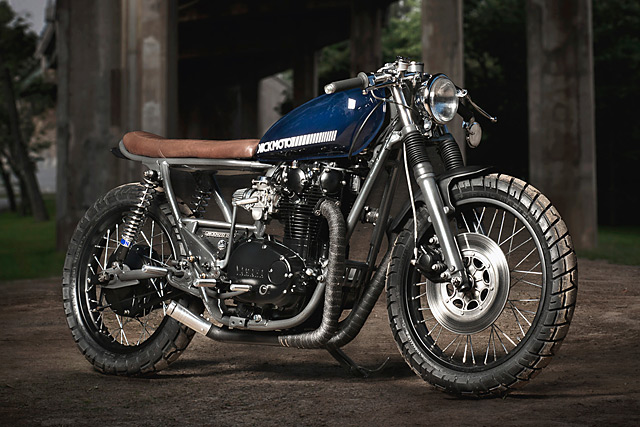 There are a lot of memes floating around the internet about Mum’s basements and not a single one of them kind. Often the domain of keyboard warriors and 40-year-old virgins, finally we’ve made a basement discovery from those dark depths that’s worth paying attention to. The fine lads from KickMoto in Halifax, Nova Scotia had a customer who was after a clean Yamaha XS650. As fate would have it, a friend of the workshop just so happened to have a stash of XS650’s stored in his mother’s downstairs you-know-what. Turns out the pick of the litter was this 1981 Yamaha XS650 which had previously been modified in a less than satisfactory manner and left to sit for many a year. Never ones to do things by halves, the KickMoto guys pulled the Yamaha down until they had a clean surface; only a blank canvas will do when you want to create a masterpiece. The frame has been smoothed, de-tabbed and a new rear hoop has been neatly welded in to support the new seat and drastically clean up the rear end. Rather than simply paint the frame black it has been finished in a mid-grey that not only gives a very clean finish but forms part of the overall paint scheme rather than being relegated to the background. The largest splash of paint is saved for the dead straight XS650 tank which is finished in a solid blue that is complimented by KickMoto decals in white. A perfect condition gas cap for the popular Yamaha is not easy to find, the knock offs just aren’t as good, but this bikes minter means there is no second best here. The front and rear fenders are minimalist in their approach and finished in matte black do their intended job without interfering in the clean lines KickMoto are known for. One of their great prides in this build is the seat and you can see why; even with the owner wanting to ride two-up there is no compromise on style here in the leather work, but quality craftsmanship also results in a comfy ride. To get the desired stance the front forks, which are finished in the same grey as the frame, have been lowered and gators fitted for that classic look. The rear suspension is the ever popular Hagon shocks, the XS getting a pair in black with chrome progressive rate springs. This particular XS650 might be a child of the eighties but it has a distinctive seventies feel thanks to the spoked rims that were adapted to fit, donated by a 1972 XS2. Tyre choice tells you a lot about both the intended purpose and the desired style of a build and there is a little nod to British Scramblers with the fitment of multi-purpose adventure rubber in the form of Shinko’s Trail Masters. Brakes might be factory spec but they suit the role and look a million dollars thanks to a lick of paint, a new brake line and a silky smooth rear hub. The heart of the beast is Yamaha’s own tip of the cap to the British in the form of the XS650’s much loved parallel twin that even shares styling with its sixties cousins. Visually this is one of the nicest 654cc Yamaha motors you’re ever likely to see, the cases, barrels and covers are in remarkable condition and look first class finished in black. Hex head bolts, polished carby tops, and pod filters make it look like it’s just rolled off the production line and this attention to those little details is evident in all KickMoto builds. The exhaust is a stunning piece of work, fabricated in-house it utilises a dual system made from 1.75inch tubing and the billet style tips were machined on the KickMoto lathe. With such a good-looking lump powering the build the guys decided to clean things up further by ditching the airbox and removing the electric start and wiring the bike to be kick-start only. The resulting negative space below the seat is further enhanced with the small lithium battery and ignition brilliantly hidden in a screened off boxed mounted just above the swingarm. The turn signals at the front are bar mounted clear LEDs while the rear utilises an LED strip for all light requirements. A nice set of clip-ons, new levers, minimalist switches, a single speedo and a Bates style 5-3/4 inch headlight maintain the ultra-clean look. The footpegs and foot controls are another KickMoto creation, once again machined on the lathe and even the passengers feet rest in style. Fads come and go, but the way KickMoto build their custom bikes means their creations will always stand the test of time. Built to meticulous standards, never cutting corners and a design ethos that delivers an ultra-clean finished product this Yamaha has come a long way from a Mum’s basement to now allow a Distinguished Gentleman to ride with his fine lady holding him close.