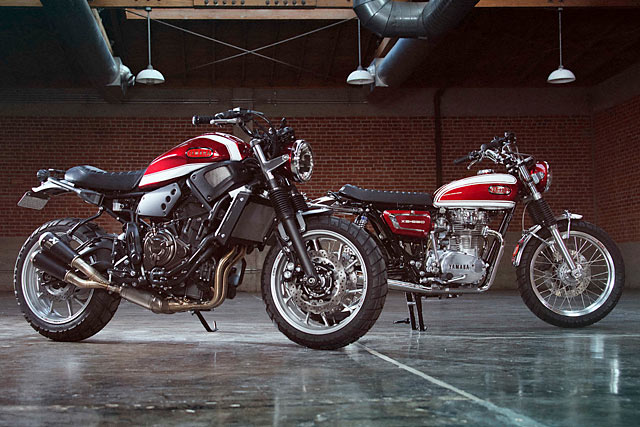 The retro revival is still in full swing with motorcycle trade shows overflowing with homages to bikes from days gone by. But never before has a chip off the old block ever been so accurately described as major manufacturer and master build up team up for the best of XS. From his base in Bettendorf, Iowa, Greg Hageman has once again joined forces with Yamaha to spawn the perfect offspring to his brilliant ’72 XS Resto Mod. It’s now a two for one package, old bull and speedy steer; they are Yard Built XS650 & XSR700 “Fast Father & Faster Son” by Hageman Motorcycles. With the announcement that Yamaha was to bring the XSR700 to the North American market Greg Hageman had an idea. Already a mainstay of the Yard Built program, the king of the Virago and having first built an XS650 back in the early 2000s he’s affinity with the marque is obvious. So he approached Yamaha Motorcycle Project Manager Shun Miyazawa at the 2016 AIMExpo in Orlando with an idea. His vision was to create a 1972 XS650 XS2 custom “Fast Father” as inspiration and build a “Faster Son” version using the XSR700. Yamaha didn’t have to think for long, Hageman’s body of work speaks for itself and both Miyazawa and Motorcycle Product Line Manager Derek Brooks gave the green light. Hageman explains deciding on a direction to go for the son’s future was the hardest part, “when you build a custom bike, you can keep doing things and then think to yourself, “am I improving this, or am I just making it different”. Brooks was quick to reinforce that both Yamaha and Hageman have similar philosophies when it comes to blending the old and new. “One of the big points of the Faster Sons philosophy isn’t so much that we want to make a modern retro bike. If we wanted to make a replica of an old bike, we could do that,” he added “We want to offer all the modern technology and performance that people expect today with some flavor of the past.” But to appreciate the son first you must know the dad and in its own right ‘Fast Father’ is a brilliant machine. The 1972 chassis was given some modern updates of its own with an early 2000 R6 front end (to retain the conventional fork look) and it’s paired with a modified SR500 MotoLanna aluminium swingarm with Hagon rear shocks. Hageman retained the XS2 stock hubs, but laced up a pair of Excel rims with stainless spokes to run more modern Shinko 705 radial tyres. As with all Hageman builds the body work is flawless, razor-sharp custom fenders do nothing to spoil the classic lines. While the immaculate red and white paint on the picture perfect classic metal is offset with a slick tuck and roll seat design. The engine might look like the original Yamaha parallel twin but it’s had plenty of work thanks to Yamaha specialists MikesXS where they performed a full rebuild. They then updated the accessories with a Pamco electronic ignition to replace the original points system and an XSCharge permanent magnet alternator with a lithium battery to run modern LED lighting. Improving performance is handled by a pair of Mikuni VM34 carbs that feed fuel to the meticulously polished engine. While a set of chrome header pipes and vintage end cans keep the visuals understated while delivering some extra pop. [superquote]“My idea was to take it, simplify and streamline it.”[/superquote]

Turning his attention to junior, Hageman was clear on how the son should take shape and the philosophy behind it, “I could have taken this bike and done a full-blown custom and changed everything…but that wasn’t my idea.” “My idea was to take it, simplify and streamline it, and build the bike as more of an inspiration for future buyers.” This meant keeping costs down and also taking advantage of the custom-friendly aspects of the XSR like the bolt on subframe and brilliant base line performance. The only power part required is an Akropovic exhaust system and with Yamaha’s “Crossplane Concept” 270-degree crank the engine screams from any RPM. Interestingly enough rephasing the old XS650 to 270/277 has become a common modification, a little proof that we backyard boys are often in closer step with the major manufacturers than many might think. But with usable power no problem for the remarkable modern twin pot Hageman focused on creating the atheistic synergy between the two bikes. The XSR now wears a set of fork gaiters for that retro vibe while both machines utilise a 7-inch high-output LED headlight and integrated turn signals for the cleanest of looks. Yamaha’s direct-fit solo seat and rear rack accessory work with a custom tuck and roll seat to match Father’s leather unit. To simplify the modern machine and to give it more classic lines the master builder took to the front fender, cutting it back for a sharp, slimline profile. The same was done to the rear with the retro vibe carrying over thanks to the neat silver fender and vintage tail light combination. The factory risers have been ditched in favour of lower Virago units that support new bars from MikesXS and with the stock speedo moved down the 21st century motorcycle takes on an understated retro charm. The factory wheels have been powder coated silver and wrapped in similar Shinko rubber for one very good reason as Hageman explains, “For me, I didn’t want to add a set of $3,000 wheels to a $8,499 motorcycle. It defeats the whole purpose of this build, which is to keep it aspirational yet attainable.” But to really pull off the plan and have the two bikes tie in together the same 1972 red paint that was on the XS650 had to be carried over. Hageman’s regular painter, Moe Colors out of Tampa, Florida perfectly matched up the colour on the removable XSR tank panels. The addition of some self-adhesive retro Yamaha badges to the XSR tank panels is yet another bid to make both bikes look more like “Father and Son”. It’s some of these features that all involved believe make the XSR such a great bike to customise “With the removable panels it’s so easy to take them off and have your local painter come up with one paint job, and then buy and paint another set of panels to create a whole other look.” adds Hageman. With the two bikes sitting side by side Miyazawa couldn’t be happier, “this project was about getting back to the basics and taking inspiration from that. Making something special or making something look good doesn’t always require a lot of investment in time or money to accomplish that goal.” But watching both bikes thunder down the road, running in a pack, its clear that Fast Father and Faster Son share a common DNA spun up in the incredible centrifuge combination that is Yamaha’s Yard Built program and the workshop of one master builder. He tells all “I’m just a little guy working in my garage”, but as history has shown when Greg Hageman knocks out Yamaha’s this good the world follows and this XS family is ready to multiply.