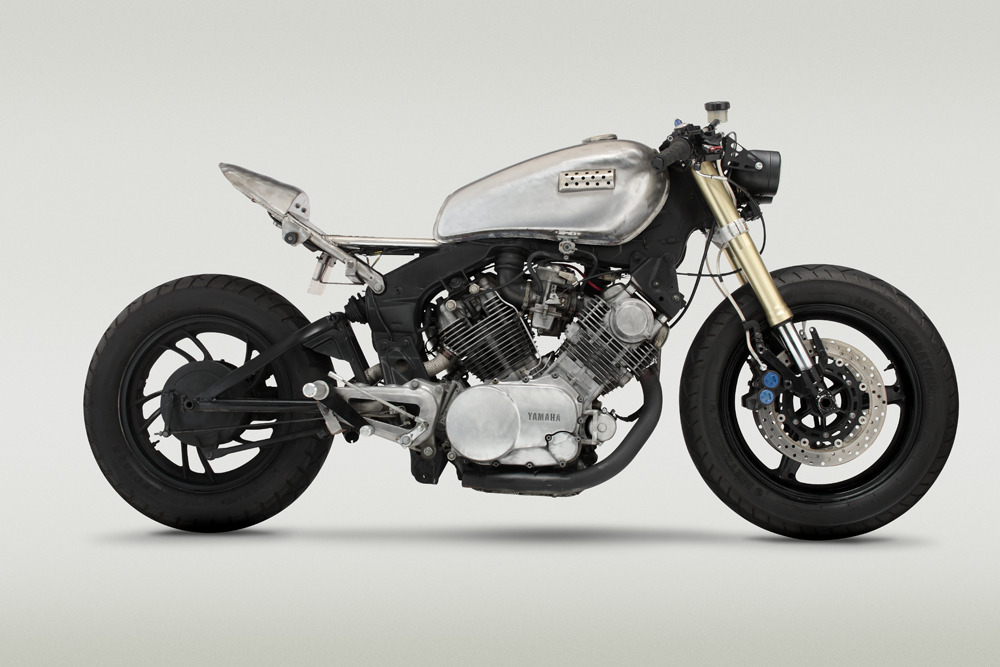 Imagine being asked to build a custom bike for a hitman. That’s what advertising creative John Ryland was commisioned to do by director Sunny Zhao. Although, the “hitman” in question was a fictional character starring in his new film called Reciprocity. It all sounded too good to be true for a ‘part-time builder’, so I asked John a few questions about the project:

So you were asked to build a motorcycle for a feature film. How did that come about?

Sunny and I met about eight years ago when he directed some commercials for me, and we’ve remained friends since. Recently, he opened a restaurant in a historic section of Richmond, and I’d ride my modified XS 850 there quite a bit. Sunny loves that bike and asked me if I could build one kind of like it for his movie “Reciprocity.”

Did he give you a description of the hitman, or maybe show you some scenes?

We met at his studio and he showed me one of the shootout scenes. Amazing. The movie’s heroine is an assassin, her nemesis is a hit man who killed her dad when she was young. Sunny describes the antagonist as cool, calculated and ruthless. The only thing that he cares anything about is his motorcycle — which, ostensibly, he cares for and modifies when he’s not busy killing people. If there’s anything human or warm about the killer, it comes across in the attention he pays his bike.

I wanted it to look harsh and battle scarred, but very personal as well — like this guy forged it to fit him like a suit of armor. The other thing I was going for was to make it look modern and old at the same time — a futuristic antique, if that makes any sense. Apart from Sunny being inspired by your XV 850, was it an open brief?

To Sunny, my 850 conjures up visions of old P-51 Mustang fighters from WWII, and he really liked that raw, weapon-like vibe. So he wanted me to run with that and come up with something that people would look at and say, “What the hell is that thing?”

Ok, now down to the business end. Can you give us some details about the build?

Other than the hidden electrical system, the other major undertaking was the front end — a 2000 Yamaha R1 setup with triples carefully modified by the amazing machinists at Maxum Machine here in Richmond. Your day job is advertising. When did you work out you had the skills to build bikes? Is it something you have always done?

I just started taking an interest in them over the past few years — modding them for maybe a year and a half. I’ve been into modifying and racing cars for 15 years or more, though. I actually convinced the agency to let me build a short track car and race it a few years back. That was ridiculous.

In the late ’90s I had a fixation with VW Sciroccos and did several engine swaps in those. Most recently I built an intercooled turbo minivan that is the ultimate sleeper. Fastest vehicle I’ve owned. That van taught me many new ways to break stuff.

The auto skills translate pretty well to bikes, but I spent all summer building bikes alongside my college buddy Greg Ownby who was a bike mechanic for 10 years. That was great because it basically pointed out all I don’t know. It’s more fun when I’m learning, I guess. How long did it take to build the XV?

With my real job being so busy, it took me probably eight months to get it where it is. When it gets warmer, Sunny will shoot the bike scenes, so I’ll take it apart and go over everything again right before that. Once the bike shots are wrapped, I’ll make some adjustments so it’s a little more comfortable for Sunny to ride around town. I actually think the bike is very comfortable. Nice seating position, but I’ll probably lower the rearsets slightly for him.

Lastly, I have to ask, why did you choose a Virago as the donor bike?

Believe it or not, I actually sought out a Virago. Go figure. The early ones like this had a monoshock which gives me a lot of flexibility when determining the lines of the bike. I can drop a solo seat way down near the tire or keep it up high like a sport bike. I went for the latter because it seemed more purposeful and went with the new front end nicely. That’s about it! If you don’t mind, please credit all photography to the talented Adam Ewing.

[Thanks to Cindy and BikeEXIF for putting us on to John]