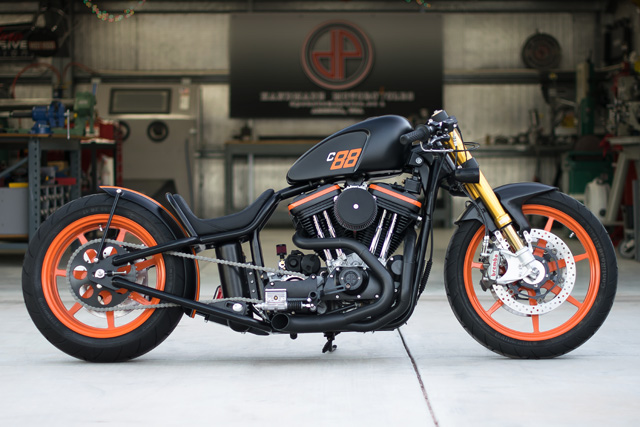 The explosion of the custom bike seen means there are literally millions of aftermarket parts on the market to fit to your bike. The only problem is the temptation can be to order half the catalogue, have no design plan and throw it all on your bike and end up with a squashed fruit salad like mess. That’s never been a problem for DP Customs of Arizona, USA, who build some of the cleanest customs you’re ever likely to see and never seem to stray from that path. Over the last six years they’ve refined their style to such a point that you only have to see a single photo of one of their bikes to know exactly who built it. Owners Jarrod and Justin Del Prado are no-nonsense guys; they like a good BBQ, a cold beer and having plenty of fun on motorbikes. So you can see why their customers love the bikes and the experience of being part of the DP Customs family and their latest build is a low slung bruiser, a 2001 Harley Davidson Sportster known as c88. “The inspiration on this one came from our customer, who said he wanted something similar to one of our previous bikes called Turbo Destroyer,” explains Jarrod. That DP Customs build had a little more in the wild department running an injected and turbocharged engine as well as being a low and long hard tail. But c88 is like its perfect cousin, a naturally aspirated beast with a shorter wheel base for slick handling and that all important smooth as a Diamond back’s belly appearance. “It’s just the two of us in our modest little shop and we like it that way. No corporate b.s. to deal with and nobody to get in the way of our creativity.” Which means when the 2001 Sporty came in for the build the brothers Del Prado could get right down to business and strip it back to the bare frame to commence work on a ground up customisation. The frame has been cut back to just in front of the motor mounts before a fabricated drop seat hard tail rear end was welded into place. Not only does the new rear get the bike down in the weeds, the seat height is even lower thanks to the design and is supported by a roll hoop style mount. Anyone who has lowered their bike this much knows you get a rude surprise when you go to use the kick stand; it’s now waaay too long. But this is not DP’s first rodeo and the frame now swings a new custom kick stand to cope with the massive drop. But the changes to the new tail don’t stop there with a mount fabricated for the adjustable chain roller and beautifully simple rear fender struts that mount to the axle plates. You start to realise that creating a clean and simple look is not as easy as simply removing parts but knowing how to make the appearance of what you bolt back on fit the overall theme. Doing just that is the minimalist rear fender, with a neat centre crease line, that exposes plenty of rear rubber while still remaining fully functional. The tank is the only other piece of tin work and takes many of its styling cues from the aforementioned Turbo Destroyer. The skilfully shaped knee dents flow with the lines of the tank so perfectly you wonder how they do it and with the rear high-mounted on the back bone it gives the bike a killer look. Up front the fender is lightweight carbon fibre that’s been mounted up with hand crafted aluminium fixtures. That carbon fibre look would seem a little misplaced if it wasn’t for the forks it swings from and with the decision to go to an inverted front end the Del Prado brother’s picked the very best. Clamped by the incredible set of billet triple trees from Chainsikle is a full on Ohlins front end that delivers the Sporty the very best in suspension technology. Not to be out done on the braking side a set of Brembo mono-block calipers clamp giant twin drilled discs for incredible stopping power. The rear end is just as strong with a custom mount enabling the fitment of a Brembo caliper to grab the single disc. The boys now hand themselves a serious rolling chassis up on the bench but to get the horsepower they were after they left no stone unturned in unleashing all of the ponies. “We started with a 2001, 1200cc Sportster and stripped the bike down to zero. We completely disassembled the motor, cut and shaped the cam and sprocket covers, and got all of the key parts powder coated.” The engine was the reassembled using Revolution Performance 1250cc cylinders and forged pistons for extra cubes and strength. To feed more fuel to the fire the stock carb was ditch and replaced with a 42mm Mikuni carb and a Big Sucker intake. While the exhaust is a one-off DP Customs 2 into 1 unit that gives them another chance to show off their fabrication skills and is finished out in black ceramic Cerakote to get all of that hot gas maintaining its velocity on the way to venting back into the atmosphere. The 5 speed box now sends the drive rearward with the factory belt given the flick “We made spacers for the sprocket cover to accept the conversion to chain drive and make room for the 190mm rear tire. We used a 51 tooth PBR rear sprocket for improved oomph out of the hole.” While the wiring has also been simplified with a lightweight Ballistic Battery sitting in a custom tray and all the wires completely hidden for an utterly clean finish. “We relocated the ignition switch with a custom box off of the motor mount, and we designed the speedo mount that we had water jetted” that places the speedo just in front of the riders left knee. This gives the front end an entirely minimalist look and the twin LED headlights from Trail Tech mounted to the lower triple clamps with more custom brackets from DP Customs only further accentuates that look. The simple lines can often go astray when it comes time to get the seat practical enough to deliver a comfy ride while delivering a design for continuity. Lucky for DP Customs then that they have a great working relationship with Unique Upholstery in Scottsdale who knocked it out of the park with a seat that fits the frame like a glove. The same can be said for the paint work laid down by Walkers Way with a colour combination picked by the man set to ride the Sportster home, “our customer’s two favourite colours are black and orange.” The Frame itself and the oil tank are powder coated in a low gloss black, while the rest of the bike features a similar look in black but with the orange giving an eye-popping contrast. The Fanta flavour is offset by silver to provide much of the highlights with racing stripes front to rear, engine details and c88 and DP Customs logos. But it’s on those wheels where it really stands out “we’ve always wanted to run these DP designed wheels in orange” and the rims CNC’d by Thomason Performance look absolutely incredible. They’ve been wrapped in Conti Road Attack 2’s by Continental Tires with the rear measuring a whopping 190/55, a serious tyre on a Sportster. To steer them down the road a set of Clip-Ons from Chainsikle have been fitted up to the forks to match the triple trees and are complimented by high quality hand controls by ISR. Clip-ons and forward controls don’t mix and the new mid mounted folding pegs and foot controls give the perfect riding position to get down low and out of the wind when the throttle is cracked. For Jarrod and Justin their favourite parts of the build are “the wheels, aggressive stance, and the long and low drag style look that we get when we run a hardtail with clip-ons.” But if you ask me, every single detail of the bike is picture perfect, high quality and true to the clean and simple style their followers have come to know and love from the best builders in the Copper State!