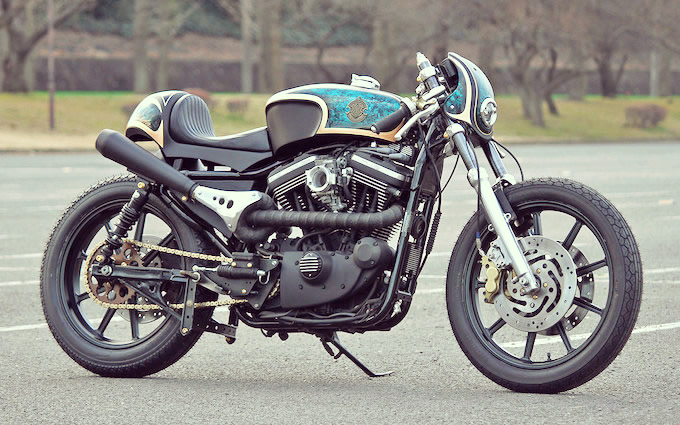 There’s no two ways about it; Japanese custom bikes are just so damn cool. Japanese builders seem to have an endless ability to jam some crazy-ass styles together and come up with the coolest-looking creations. So we were stoked to see this killer build land on our virtual doorstep during the week. Although we’d never hear of this particular shop, their skills were clear to see. Then we find out that they are a paint shop. Huh? What sort of paint shop that can turn out a build like this? Apparently, Saitama’s Takashi Hashimoto and his TM Garage can. And here’s the proof. The bike (a.k.a. ‘Lambda’) was unveiled in December of 2015 at the Yokohama Hot Rod Custom Show. And if you know anything about the current state of the Japanese scene, you would probably be able to spot the familiar Cherry’s company stylings at first glance. Well, at least the body shape is in a Cherry’s style. But the graphics and detailing on the bike are all the original creation of  Hashimoto San. And let’s face it, who isn’t inspired by Cherry’s builds?

Hashimoto’s main requirement for the body that it had ‘visual symmetry’, an apparent response to the original bike’s relative narrowness. This is also reinforced by the little touches on the bodywork, including the recessed taillight and plenty of blacked out (or ‘reversed ghost’ as the  Japanese calls it) components and surfaces to keep the eye tracking on the right visual cues.

Hashimoto also concocted a special mount under the seat cowl so that there would be a nice, straight line toward the back of the bike from right under the tank’s rear. The bike’s height is clearly low, so a Skunk seat (that’s Skunk, a Saitama upholstery company, not some leather made from a skunk) is positioned perfectly to ensure a more traditional café riding position. This meant a relocated battery and oil tank, and an exhaust design intended to visually fill the vacant space under the seat itself.

Handling is improved by the addition of an 11″ ‘Bop Machine’ swingarm reinforcement set-up and Continental tires on a 19″ front and 18″ rear wheel. A Germany Motogadgets speedo in a vintage style is just one of the many high-end elements that have been added to the bike, yet the overall result seems very well-balanced and harmonious. In a very Japanese way, Hashimoto says “If there is not complete clarity at the time of vision, the resulting bike will not be truly finished.” Yes, sensei.

And then to the paintwork. Being TM’s main game, you’d expect it to be pretty special – and that it is. A turquoise mother-of-pearl effect was applied all over, and it was then selectively blacked out by Hashimoto San with the pin striping help of Kid Kustom Paint who added the gold finishing touches and lettering. “Since black had become the real theme of the machine, I tried to black out the details in order to provide a sense of unity,” says Hashimoto which, when you think about it, is a pretty bold step a professional painter.

The upshot is a bike that has taken the best bits from Cherry’s undoubtedly masterful ‘near future’ stylings and added a master lesson in custom paint and restraint to create something truly unique and beautifully, creatively, perfectly Japanese.