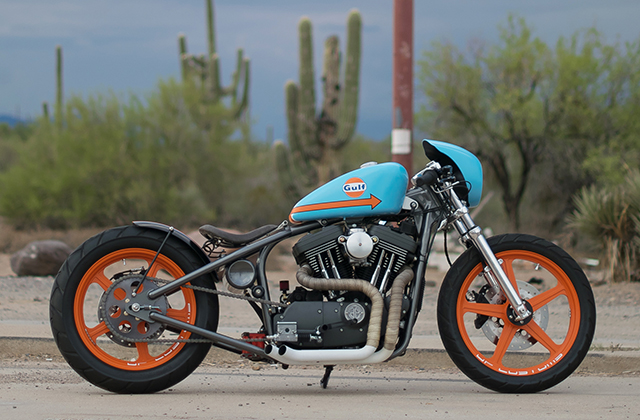 The Del Prado brothers (Jarrod and Justin) from DP Customs in Arizona have been at it again. These brothers are renowned for building top class custom Harleys, which is why they were approached by a motor enthusiast to build him a Sportster. The customer had seen their last Sportster with Elf livery and briefed them on building something similar. “He wanted to know if we’d be willing to do a Gulf themed bike with Steve McQueen’s #20 on it” says Jarrod. “Of course we said “hell yes!”, and it was on.” This time they started with a 2001 1200cc Harley Sportster and began building what they do best. The brothers started by giving the engine some more horses, with the performance being improved with a Revolution Performance 1250cc cylinder and piston kit, as well as a Dynatek’s single fire ignition and coil. The motor now breathes through a tuned CV carb, a Joker Machine intake, and exhales through a custom DP exhaust. The rocker boxes, cam cover, and primary cover were done in gray gun coat. Like a lot of their previous Sportster builds, they have modified the frame by stretching it 4″, and lowering it using a drop hardtail by Led Sled.  The super clean 5 spoke wheels were designed by DP Customs and CNC’d by Thomason Performance. They also upgraded the braking to match the performance – with Brembos front and rear. The tires, 19″ front and 18″ rear are Continental Trail Attacks – designed for adventure touring machines. Adjustable clutch, brake levers and front master cylinder are from the Swedish company ISR. The mid controls were custom made by Shane at Chainsikle. To finish the build off, the bike was given to Walkers Way to paint it in the distinctive Gulf livery. “The client gave us full creative freedom on interpreting the Gulf scheme, and Walkers Way hit a home run with the paint and satin clear. It is by far our favorite part of the bike!” After DP Customs delivered the bike to a very happy client, they discovered that the Sportster would be on display at the very prestigious 64th Annual Pebble Beach Concourse d’Elegance, parked next to a Gulf liveried Fort GT – they even got to ride it on to the 18th green.