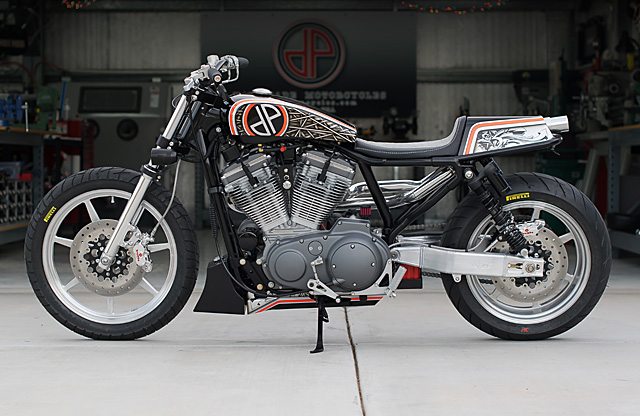 When long time upholsterer for DP Customs, Uniqueaz.com, dropped by the workshop for a cold beer and a chat with owners, Justin and Jarrod Del Prado he revealed he hadn’t come to discuss the latest needs of a shared customer but to place an order for a bike of his own. Having carefully studied the quality of the brothers workmanship having worked on many of their bikes, he wanted one of his own. With that some ribs were thrown on the smoker and the beer kept flowing as they began an impromptu design session. The brief from Unique Upholstery was simple, it had to feel comfortable to sit on; With only the barest of constraints they thought up a Street Tracker named “W” based on a 2002 Harley Davidson Sportster that’s big on power, low on weight and rips up the streets in as brilliant a fashion as it appears when standing still. Starting with the bare Sportster frame they smoothed it out, ground off the factory tabs and knuckles and cut off the subframe. The new hooped rear now supports a slim-lined, hand crafted tail-piece that is fabricated from aluminium, which was also the metal of choice for the stunning belly pan. The fit and finish a testament to the guys fabricating skills with any material and matches brilliantly with the Airtech fibreglass tank that saves more than a few pounds. It should come as no surprise that Unique took care of the seat, a mix of leather with diamond stitched Alcantara serving as the ultimate rolling advertisement. The paint was laid down by Walkers Way with silver metal flake, black, white, and neon red used in both solid and graphic forms to create a visual spectacle incorporating both the owners and builders logos. When it comes to suspension the stock HD gear provides a smooth comfortable ride for hours in the saddle, but that’s not at all what a Street Tracker is about. This is a bike capable of a hell of a lot more than a main street cruise and the high end components from Progressive Suspension fit the task perfectly. Out back the twin shock setup remains, now running Progressive’s 970 series piggyback reservoir units with an exposed dial providing easy adjustment of the compression dampening. Upfront things may appear stock but again Progressive has come to the party, there is no simple spring change but full monotube damper cartridges with custom tuned forks that brings to this Harley the sort of suspension performance you find on a high end roadbike. To give them a neat touch the tubes were stuck in the lathe and the fender mounts milled off for an ultra clean finish. Adding more high tech componentry to work with the new suspension is the fitment of a Trac Dynamics swingarm that is also considerably lighter than the stock steel item with the picture perfect welds a hint at its exceptional quality. Mounted under the swingarm in a custom made box is the Ballistic battery that offer exceptional performance at about 20% of a conventional batteries weight. The reduced mass means the standard brakes would be more than adequate for the build but again no corners are cut by DP Customs. Both front and rear now utilise drilled floating rotors for extended hard braking and the calipers are the best in the business from Brembo. But you’d not have known their origin unless the boys had taken the time to hand paint back the logos after they were first removed to achieve the calipers mirror shine, such is their commitment to detail. Having stripped away a great deal of weight from the Sportster you could have forgiven the guys for simply cleaning up the engine and bolting on a set of pipes, but W was being treated to all the goodies. Getting the party started is the big bore kit from Revolution Performance with new cylinders and forged pistons bringing capacity up to a solid 1250cc. To make the most of the extra cubes the cylinder heads have been ported by Duffee Motorsports with a cam to match their flow coming from Andrews. To expel the increased gases there is no catalogue kit here but a beautifully crafted set of pipes made in house that finish under the seat in true MotoGP style. To keep from burning the riders bum the pipes have their rear piece heat wrapped and the underside of the seat fitted with heat shield. The new exhaust means the stock oil tank location under the seat is now home to a pair of pipes so a new place had to be found. The solution comes in the form of a chin spoiler, that doubles as an oil tank, which the boys crafted from steel. It’s a work of art, not only functioning as an easily accessible oil supply but also providing a visual enhancement that is only improved by the stunning aircraft style fittings and braided lines running back to the engine. Setting alight the compressed gases is the excellent Dynatek single fire ignition and coil for an ultra reliable spark that has thousands of hours of racing R&D built into it. To dress up the engine in a way to match its performance the cam and sprocket covers have been trimmed before being covered in Cerakote coating along with the primary and rocker covers. Accessories are kept to a bare minimum, a machine of this quality doesn’t need a host of stuck on gadgets to give it appeal but those that are used are of the highest standard. Custom fold-up rear sets are both functional and form-fitting to the overall design and nothing says quality like the incredible levers and master cylinder from ISR. To get the Harley rolling DP Customs designed their own set of 7 spoke wheels and sent the drawings off to Thomason Performance to machine this one of a kind pair. The raw finish tying in beautifully with the swingarm, engine and forks to create a uniform approach to the design before being wrapped in some serious Pirelli Scorpion rubber. It’s a bike inspired by the sort of desire that comes from constant exposure to DP Customs style, quality, and attention to detail. With the build done it sounds like everyone needs another beer to celebrate because as Jarrod explains “We’re super happy with how it came out, and our customer loves it. And yes, it’s a blast to ride!”