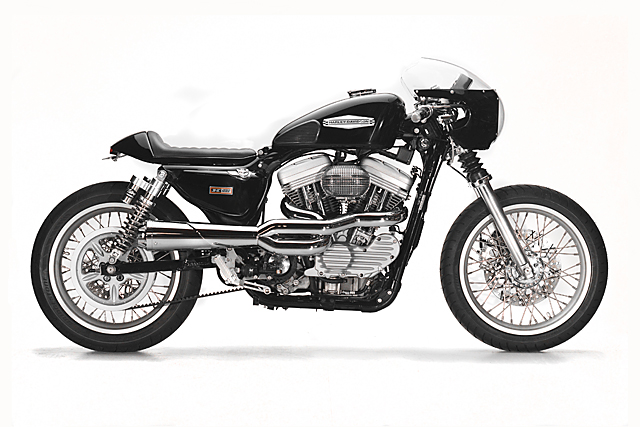 Never fear, Hageman is here! Needing no introduction, Greg Hageman AKA “Doc’s Chops” of Hageman Motorcycles is one of the leading hands and pioneers of the custom motorcycle renaissance. He’s also one of those guys who is a builders builder, I know I’m not the only one who before attempting a new build sees what Greg has done with that make and model, both for inspiration and to see how it’s done right. It’s no surprise really, motorcycles are in his veins having grown up on a farm in Rural Iowa in a family where trips to the dealerships had him dreaming of those sweet rides before he was old enough to reach the handlebars. But it’s a lucky rider who gets to throw their leg over his latest build, a 2005 Harley Davidson XL883 Custom that brings more than a little racer to its new cafe look. Greg might be better known for his Yamaha and Honda builds but as a Master Level 5 Technician with over a decades experience at a Harley Davidson dealership he more than knows his way around Milwaukee muscle. Having always wanted to build a Cafe Sportster Greg also had a distinct vision “My goal was to give it an AMF era look… The paint scheme and decals are typical circa 1967 factory” That paint, beaming in gloss black and silver with period correct decals was brilliantly laid down by Morrell Roberts. While the tank sits 2inchs lower on the frame thanks to Joe Mcdede who reworked the stock tunnel. Hageman made the set/subframe combination himself that gives a true cafe racer feel without losing any of the Sportster charm. With the final piece of body work the reproduction front fairing that gives a racing appearance without the bulk that comes with many similar units. At the heart of the Cafe Racer culture has always been finding ways to make more power and shed weight and Greg has more than addressed those two issues. The engine started life as a standard XL883 and the long stroke motor gives a smooth torquey ride, but with the engine torn down Greg made the decision to add some more cubes. The 45° V-Twin was bored out to bring capacity up to 1200cc and there is an instant gain in both power and torque. Extracting some extra ponies is the beautiful 2 into 1 high exhaust system with stepped out headers and finished with a monstrous megaphone muffler. The air cleaner is a brilliant throw back to the era Greg is honouring, while cam and rocker covers from EMD and the cast silver with black barrels further add to the period correct imagery. From the factory the modern Sportster handles better than many give it credit for, up to a certain point that is and Greg is not the kind of builder who leaves things half done. To remedy the front end he lowered the forks and re-valved, re-sprung and installed preload adjusters to the forks. Feel and stiffness is improved with the addition of a fork brace and along with the gators are the only visuals on the fenderless front end. To give the bike the right stance the rear end has been raised with the addition of high quality Hagon nitro piggyback shocks that also add a level of adjustability to the rears handling. Further in his quest for weight reduction Greg took some Buchanan Sun alloy rims and laced them to the hubs with stainless spokes. The alloy rims have been wrapped in modern Bridgestone Battlax tyres and according to Greg “All these improvements helped handling dramatically, less rake, sport radial tyres, well tuned suspension and plenty of ground clearance to lean into any corner.” Steering the Sportster into a turn are the fittingly cafe racer Tarozzi clip-ons with ’60s style black grips. Adjustable levers mean you can hang on tight while still operating the brake or clutch and a braided brake line adds some extra bite to the front end. “Shane Sorenson from Chainsikle made the “Low” rear sets. They move your feet back and under you, but give you enough room for comfort if you’re not built like a horse jockey.” The look of the build is largely old school cool but the electrics are 21st century premium technology. The switch blocks are gone and in their place Motogadget’s high-end polished push button controls. The bar ends may look like they’re simply polished at first but they are another Motogadget item, bar end turn signal m-Blaze Discs. The stock instrument cluster does the job just fine hiding behind the retro fairing and a small tail light and number plate holder finish out the package. This is part of the Hageman genius, a bike that wouldn’t look out-of-place on the racetrack at a classic meet and yet still retains street legality and the ability to perform almost any duty your average daily rider might enjoy; just pray for no stone chips! But there is one more area where Hageman excels and it goes back to the very beginning, his ability to inspire other builders, create the parts many can’t to facilitate their ideas and his bikes serve as a conduit of inspiration for so many trying to make that same make and model something truly of their own. That’s what a true show bike is all about, quality workmanship, innovation and inspiration to those who see it. So it makes perfect sense that he has submitted the Sportster for consideration for the Handbuilt Motorcycle Show in Austin Texas this April, it’s hard to imagine it not being selected!