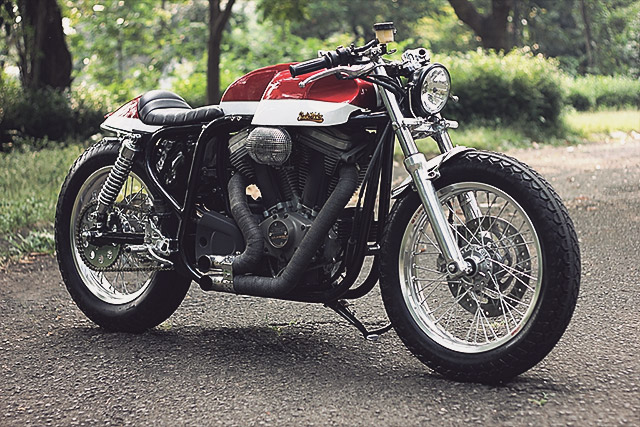 Nothing ever really goes to plan. The multitude of options available to us at any one time makes it hard to know where we will end up. Unless it’s time to go to the pub, because that is a given. This indecisiveness through an excess of options affects the custom motorcycle world as well, with culture/drivetrain/performance/bike styling choices making it hard to settle on one result. This is what happened with today’s feature bike, the latest offering from Indonesian bike builders Studio Motor. Over the course of the build process the engine capacity tripled in size and gained a nationalist motif, all while staying true to the café racer spirit. Built from the ground up using Indonesian ingenuity in the face of a limited custom bike scene, Studio Motor knows certainly knows the best options when it comes to bringing a bike to life. Ladies and Gentleman, we’d like to introduce you to ‘The Patriot’. The bike was initially commissioned by a cafe racer fan, who had the plan of utilising a Honda CB350 twin engine in the build. After much discussion, it was decided a Harley sourced V-twin would make for a much more favourable option due to it’s “tremendous sporting power”. The layout for the bike was adjusted accordingly, and a blueprint for a full café racer style bike to be wrapped around the American V-twin. Building on previous experience, a ‘featherbed’ style chassis style was to be utilised. One inch seamless pipework laid the groundwork, and was overlaid with 1.5mm galvanised plate in the form of cafe racer inspired bodywork. The fuel tank is of a 60s TT aesthetic, the main influence being the Norton TT fuel tank from the period. Helping to give the bike it’s sporting stance, the front end is fitted with a set of 41mm telescopic forks, donated by a Honda CF400SF. At the rear sits a set of 13 inch Sportster shocks, customised to suit the more aggressive riding style the bike would be subjected to. Rim choice for both front and rear is TK Japan, shod in Coker Diamond tread rubber. Tire specifications on this build are 18×4 on the front, and 18×4.5 on the rear, giving that awesome balloon profile that café racers desire. To ensure the custom machine pulls up in a hurry, brakes all round are Nissin cylinder equipped. Happy with the factory output of the Buell XB12R powerplant, the boys from Studio Motor decided to leave the internals alone. The custom air filter and exhaust system, fashioned inhouse at the workshop, is more focussed on improving the engine note at speed rather than motivating the bike itself. To ensure the rider is able to carry out the cafe racer riding position (and to stop their right foot from cooking), a pair of rearsets was mounted to the machine. Finally, the whole package was painted by Comet Studio in the colours of the Indonesian flag. Using Sikkens paint products, the finish is a beautiful composite of Indonesian nationalism and 60s flair. With the build concept moving away from the original intention to create a small capacity small scale bike, the change to a 1200cc bruiser was a choice for the better. The ability to produce a frame to suit the V-twin helped with the build as well. A proud workshop with a patriotic attitude and ability to carry out the majority of work themselves, has allowed Studio Motor to create something beautiful. With the build finished, there is only one thing left to do, and it is best summed up by Studio Motor themselves: “Let’s do the ton, brother!”