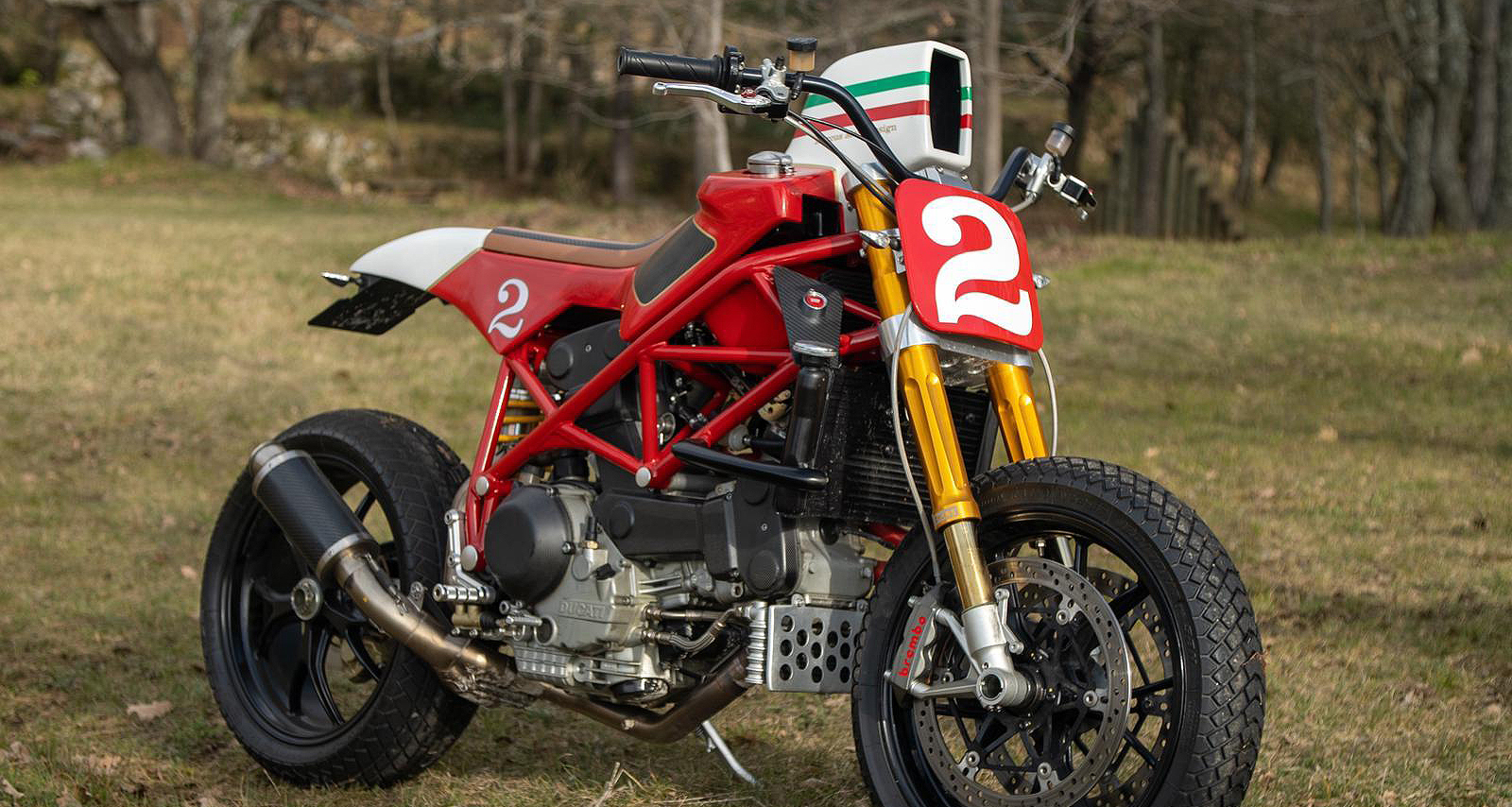 When Marcus “MotoDesign” Carlsson released his F1 Tracker in 2011, it’s fair to say that it caused something of a stir! Some people revelled in the unique style and skill, while others (perhaps the majority) aghast at the sight of such an over-the-top air scoop, spurned the build. I find these aesthetic eccentricities endearing and haven’t looked back since adding it to my collection in 2015. Yes it’s a bit whacky but I love it, not just to look at but also to ride, for short jaunts on local mountain roads.

The smashed up donor Ducati 996 was salvaged by a friend at a local dealership, and thus the project began. Having honed his skills on a Husqvarna V1000 concept, Marcus felt ready to tackle a more ambitious design that, love or loathe, is undeniably an amazing achievement considering this was only his second build. Comprised of a single piece of carbon fibre composite, the bodywork is a thing to behold and is quite brilliant, the curved shape of the tail section is a thing of beauty in my, the beholder’s, eye. The end product is something that is becoming more rare these days, it’s imaginative and truly unique, it created a niche genre that doubtless anyone would ever consider again; a Formula One styled, flat track bodied Ducati sportbike amalgamation. It’s wonderful madness!

Marcus, an avid fan of supermotard and flat track bikes, wanted to create something along these lines with a sleek silhouette and minimal bodywork. So, within the cramped confines of a one car garage in Stockholm, which was also home to three bikes and two benches, Marcus set to work. Once the new riding position had been decided upon, he then used foam to create the initial shape and a plank of wood to mimic the seat and hey presto, job done! Or so he thought.

The last thing he wanted to do was stifle the engine or broaden the front aspect, keen to retain the lightness of the front end, he declined conventional side air intakes, so “it had to go on top!” Inspired by the shape and colour scheme of Niki Lauda’s 1975 Ferrari Formula One car, it’s certainly eye catching and pulled off with a great flair for design and detail. Of course, I can’t not mention the flat track bars and the Ohlins shocks with WSBK legs, the cherry on top of an already very special cake.

Once upon a time an F1 Tracker kit came close to fruition but economics stood in the path of a series run and not wanting to tame the initial concept, Marcus wouldn’t entertain the notion of a scoopless version.

So, a decade on, what’s the F1 Tracker actually like to live with? Well, life alongside such an attention whore can often lead to feelings of superfluity, the rider goes virtually unnoticed while onlookers gawp, confused, intrigued, perhaps bewitched. Unsurprisingly, the outlandish looks are accompanied by an exhaust note of equal preposterousness, the whole thing is quite entrancing. A feature I particularly enjoy is the toggle ignition switch and large red starter button mounted on a little panel just in front and inboard of the rider’s left knee. Once underway, it’s very fast, very nimble and ephemeral, thanks to the thimbleful of fuel the tank can contain.

As I mentioned earlier, the bodywork is entirely made of carbon fibre, yes this includes the seat, and I admit that the first time I accelerated hard I nearly slid off the back, it was quite an eye opener. I have sometimes toyed with the idea of having it re-covered with a slightly more forgiving material but have chosen to respect the original vision of the builder and keep the bike exactly as it was when it left his workshop. The first iteration of the seat was actually made of metal with drilled holes and rounded flanges that curved around the body, so I should actually be grateful for what I have and after all, none of his four builds have upholstered seats, so I salute this unusual trademark.

A year or so after I procured the bike, Marcus came to visit and we went for a blast together, him riding the demonic Desmosedici and I on the tracker. On the sinuous roads near the house, I was on a far more suitable machine, the power delivered by the 996 is plentiful and Marcus admitted that these were ideal roads for the bike and that it was never truly intended to be ridden on a track.

Now working for Cake electric motorcycles, Marcus’ inner petrolhead and atypical thought process shows no signs of ebbing. He’s currently reclothing a modern KTM 250 two-stroke with the bodywork of a Kawasaki KX500 with a translucent tank. The man’s imagination knows no bounds, it’s a happy break from the mould, long may his work continue.