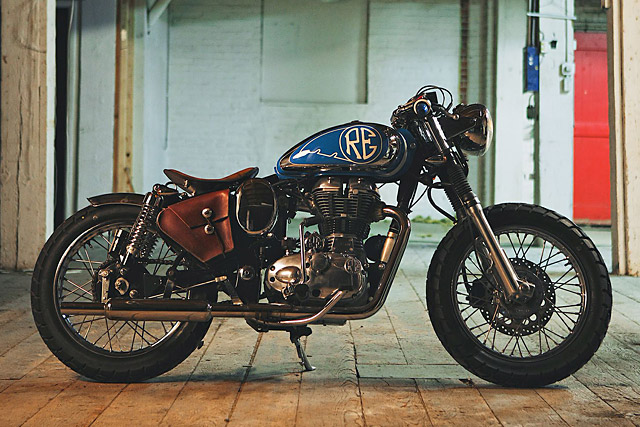 Royal Enfields. Is there nothing they can’t do? Whether it’s carrying yaks around Tibet, being sent off to war with machines guns attached or ferrying riders on trans-continental journeys, it seems that there’s not a thing on god’s green earth that can stop them. And now we can add another notch to the bike’s belt – that of beach cruiser. Strange as it may seem that classic, sand-loving bicycle and signifier of all things holiday is just what Canadian bike builder Brent Giesbrecht used as inspiration for this simple yet impressive build. And the results are so bang-on we can almost feel the sand in our swimmers right now. “My name is Brent Giesbrecht and I’m from Kelowna, Canada. I’m the owner of MotoVida Cycle Inc. Kelowna is a city of about 130,000 people that’s full of orchards, vineyards, wineries, golf courses, micro breweries and lakes. It also has a great, laid-back, west coast vibe.”

Brent also tells us that he has always loved the beach cruiser bikes that fill Kelowna’s waterfront boardwalks. And with their pastel colors, fat tires and brown leather seats, can you blame him? OK, so maybe not so much on the pastels… but still. “I wanted to try and capture that beach bike look and feel on a Royal Enfield, so I started with a ‘11 Royal Enfield 500 EFI. It was stock except for an off-road pipe and an ECU. Once I stripped everything off the bike and was left with the frame and swing arm, it became pretty clear that it was leaning towards the bobber end of the spectrum. So somehow, a beach-bobber idea started to brew.”

Brent thought that the top yoke, gauge cluster and headlamp assembly seemed a little cumbersome, so he found a trials yoke and a separate headlamp setup from an older 350 Enfield which did the trick. He also added some gaiters to cover up those skinny Royal Enfield front legs. Finding the original tool and air boxes a little too bulky, Brent removed them thinking that maybe some thinner, off-the-shelf saddle bags would look better in their place. But after a month of fruitless searching trying to source the right items, he decided to visit his local saddlery, where he bought himself a nice chunk of hide and taught himself to use a sewing awl. “One bag is equal to 370 stitches,” he says, wearily.

“Then, after finding a set of Italian barrel handgrips in blue and white, the color choice was done. I really love the Royal Enfield wing logo on the engine cases, so I decided to incorporate that into the paint design – I wanted it to be bold, too. Local painter Todd Regier obliged.” Brent flipped and reversed the ‘bars, chopping an inch or two from either side. This was to be temporary, but the bend of the bar matched the contour of the top yoke exactly, so naturally they stayed. The rear fender is a chopped-down, aftermarket item which is held in place with the leftover front fender struts.

The seat is from Sinister and is a clearly a very nice piece, although Brent suggests that the more miles he puts on the bike, the more he is thinking about a change. The rubber is Kenda K761s, as he felt that the original setup was “a bit too Kate Moss and needed to be butched up a bit.” Personally, we think a house brick would look masculine if Kate Moss was standing next to it, but that’s probably just us. To finish, Brent puts his glowing stamp of approval on the bike – and it’s one that turns out to be very close to his heart. “All in all I am very pleased with the outcome. To be honest, I built this one for myself and it brings a huge smile every time I ride it.”