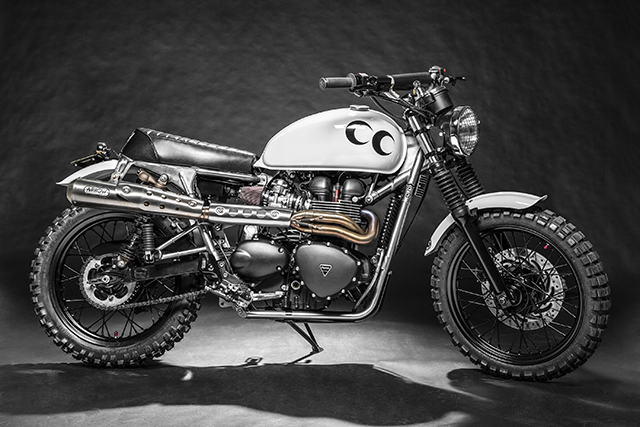 Portland’s Thor is an interesting character with an even more interesting name. Not only does he run one of the largest custom bike shows in the world – The One Show – he also builds top notch bikes out of his shop, See See Motorcycles. He recently sent us this bike and included such a comprehensive write-up that we thought we’d run it as is. So we’ll pass you over to Thor to take you through his latest build, this tough looking Triumph Scrambler entitled ‘Gap Tooth.’

Gap Tooth is a strange name for a custom built motorcycle. This is a fact I won’t dispute. Named Gap Tooth because Thor, the God of lightning, had a goat named “Tanngrisnir” which translates loosely to Gap Tooth. Tanngrisnir was his pet goat and when Thor became hungry, he ate ol’ Gap Tooth. After finishing his scrumptious meal, he would simply pile the bones up and poof, Gap Tooth would be resurrected as a live, stinky goat again.

So I found myself building a 2012 900cc Triumph Scrambler, a bike which needs little modification straight from the factory. Not only that but many, many folks have customized this bike into many, many variations – all equally cool and different. The idea was to tear this beast apart and rebuild it just a tad more off-roady, a smidgen more scrambly. In a sense I wanted to chew up and eat a perfectly new Triumph just like the god of thunder and lightning. The first part of the build was to remove most of the plastic bits: front fender, turn signals, mirrors, headlight, taillight, seatpan, reflectors, side panels, and air box. Pretty standard stuff on most builds.

We wanted to emulate some of the cues from Desert Sleds and Scramblers of the old days. Finding vintage parts that would work on a newer bike was tough. There are a lot of sensors and electrical components that make fitting old tanks nearly impossible. For one the fuel pump that bolts in the gas tank is entirely bigger than most gas tanks themselves. It is possible, and we had talked with others who had converted to an external pump. But what would be made up for with “looks” would be lost with reliability and usability, so we opted to use the stock(ish) tank.It was then modified with a centerline rib to match the old center welded tanks from vintage Triumphs. A small detail that would bring together the choice for front and rear fenders.

A set of brand new ribbed fenders from LowBrow Customs had the correct diameter to the wheels and could be shipped in just a few days. After mocking the bike up a few times I had a realization… the tank pinches in at the center of the bike, throwing off all the lines of the frame motor, and seat. A new tank bung was fabbed in and raised the tank at the rear just over 1.5”. The basis of a Scrambler is a bike that could be ridden from home to the track, raced and ridden home again at the end of the day. Back in the day racers would pull the headlight, mount a number plate, and off they went. Keeping with this spirit, both headlight and tail light assembly is simple as possible to remove and install. The tail light was handmade by James Crowe of Crowe Customs – the quality is top notch. The headlight bucket was chopped back to give it the old Lucas style flat bowl.

Another cluster simplification was to remove the tach. On modern Triumphs the tack is easily removeable however removing the speedo is a different story. The computer in the odometer will unable the bike when removed. Motogadget sells a computer to jail-break everything, but its spendy. A new set of the vintage bike bend Renthals were chosen for bars and capped with retro ODI Mushroom grips. Lets talk about the seat for a minute. The stock seat is BIG, massive in fact. its wide, long and flat. It makes sense why its like that if you have ever torn into a Scrambler, there are sensors, wires, batteries, frame, all kinds of stuff under there. We wanted more padding with a smaller footprint on the bike. The seat had to sit on the frame and cover the necessaries.

A lithium-ion battery replaced the stock one opening up a bit more room, but necessatating a ton of wiring and wire removal. Digital Directiv Joe is just the man for the job, He is a true wizard with the electrical components. Building a new seat also meant changing the rear frame. About 9” of the stock frame was lopped off and replaced with a loop giving it the classic scrambler look. An Arrow exhaust was necessary because it sounds amazing and gives good amount of added power. The rear frame modification warranted some new exhaust brackets, easy. Suspension, the stock suspension is one area that needs a little modification straight from the factory. Some friends over at Progressive Suspension have the fix: external reservoir 970 series shocks! The wheels are steel, chrome, and clunky from the factory, not only that but the rear is a 16”. Something had to be done, 19” Excel rims were the answer. Given another chance to build the bike, it might be nice to use an 18” on the rear and keep the front at 19”. The overall look of the twin 19”s is great but limits your tire options to any flat track tire, or some obscure retro tires and maybe one or two DOT knobbys and basically any MX tire your heart desires. Removing the airbox looks clean and lightens the bike up by a couple pounds but man oh man does it create a cluster problem. Building the seat with a small hollow space underneath gives you just enough space to stuff in most of the crucial components. The seat cushion was carefully sculpted then sent over to New Church Moto to have the Chrome Bags HD Ballistic Nylon skin expertly applied, the final touch was the “Triumph” on the back painted by non-other than Ornamental Conifer. So how about the finished bike? Absolutely love it! Long distance trips no problem, offroad trails and dirt roads? There isn’t a ton of clearance but behaves a lot like a dirt bike – if you can man handle this beast it has amazing power!

In the city, it’s surprisingly nimble and comfortable in traffic, ergonomics are upright and give you good visibility. One downside is the knobby tires are a little squirrely at times, but still a good time.