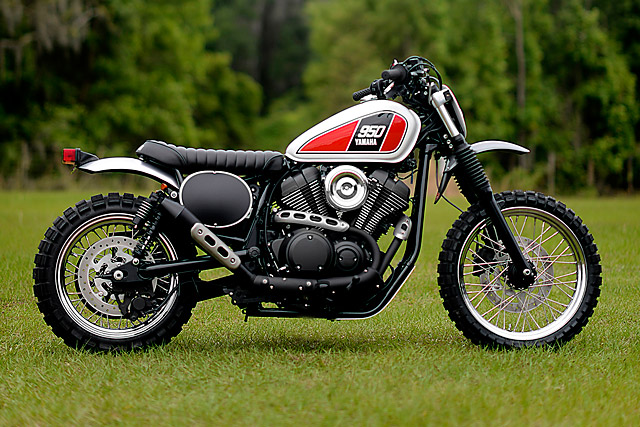 Once in a while, the eyes of even the hardest of hardcore custom bikers wander. Sure, old custom bikes are the duck’s nuts – but what if one were to loose all sense of rhyme and/or reason and buy a brand new Japanese bike? Maybe one to keep in the garage next to the antique Far East classics you currently have. Have you ever felt the urge? We have. And guess what? There’s actually isn’t that much on offer. With the notable exception of the just re-released Yamaha SRs and the Honda CB1100, you’re pretty much up Soichiro Creek if you actually want something that looks half decent without a heap of work. Until now, that is. Japanophiles – meet your factory custom bike saviour. His name is Greg Hageman, and this is his rather masterful tilt at a 2014 Yamaha Bolt, factory warranty and all. “So this bike is a 2014 Star Bolt 950. When I designed the Gold Bolt for the Star Bolt Build competition, my thought was to build something that could be reproduced and bolted on so as not to void the factory warranty. This bike is the first to receive the kit that I am building and selling on eBay.” Greg went with a combination of styles on this build, or as he puts it a ‘TT500 look’. The wheels are 19x3s up front and 17x6s at the rear. Conveniently, he has two sets of tires to run on the bike. One is a set of Continental Attacks for sticky street use, the other (more experimental) set was the Continental TKC dual sports. Apparently both work well, but the TKCs have really been punching above their weight. “They actually handle the pavement very well. I read the reviews before buying and they are amazingly well-behaved. But throw on the Attacks and it’ll stick to the pavement like glue for some aggressive street riding.” The rear shocks Greg chose are from Works Performance and are 1.5″ longer than stock. The combo number plate and headlight unit is something Greg will also be making and selling soon. The muffler is made using parts of the original set-up and a Cone Engineering ‘Quiet Core’ megaphone. The tail light is a repro TY style, with the bespoke seat, subframe, number plates, skid plate and tank decals all coming from Greg in a ready-to-buy format. We’re beginning to think that he just may have too much spare time on his hands. “It can be recreated by any home garage mechanic and you should still be able to retain the warranty when you’re done. The parts I make aren’t too expensive; they run under $1500 for everything. Sure, the expensive bits like the wheels, tires, shocks and the like can get a little pricey if you the quality stuff. But hey, it’s a custom bike! Once you’re done one, you won’t see duplicates at your local bike night, I guarantee it.” The bike is modern, reliable, and apparently very easy to ride. But its looks are deliciously retro, which Greg says that was pretty much his goal. “Not everyone who loves old bikes has the time to spend wrenching and fixing stuff. This bike is purely a ‘turn the key and ride’ proposition.” Sounds like a great idea to us. [Photos by the ever-brilliant Erick Runyon]