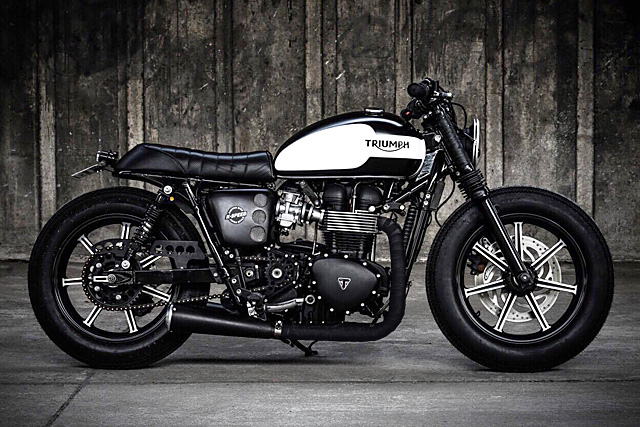 There are literally millions of two-wheeled machines on the streets of Thailand, with the market dominated by a huge variety of scooters and low capacity commuter bikes. With 15 million people living in the Greater Bangkok area it makes for the perfect form of transport, if not more than a little dangerous for the uninitiated foreigner. But where the streets of LA and London have been home to vintage-tyred, old school styled Cafe Racers for decades, in Thailand it’s not just a case of what’s old is new again, it’s simply never been seen before. For the huge motorcycle megastore K-Speed, with branches across the country, custom bikes play a crucial role in their daily fun and promotion. But for founder of the brand Eak they are a way of life, a passion and on this build his chance to deliver to the Thai streets the rare sight of old school cool; it’s a 2015 Triumph Bonneville with his trademark sinister spin.

With larger bikes only a relatively new offering in countries like Thailand the chance of finding a ’60s Bonnie is virtually non-existent. So instead Eak was forced to express his love for the old school trumpet look through a much more modern machine and given his trade mark use of satin and matte black the name of this build “Black Bulldog” couldn’t be better suited. Don’t get it twisted, Eak isn’t here to replicate the past deeds of others he’ll take his cues but “The challenge of this build is I want to make it dominate the other Bonnie’s in the market here, most of them here are tall and look like touring bike.” So with that in mind he started stripping the new bike down to its bare bones with the plan to get it down in the weeds ready for a scrap, stripped down and painted in black. The first items on the list to be scrapped were the big chrome fenders, the stock bars and those classic Triumph mufflers. Next up Eak got the grinder out and took the rear end off the bike with the subframe chopped back almost all the way to the rear shock mounting points. The goal was to make it look as close to a solo as possible without compromising the frames integrity and while a passenger would fit their pegs have been removed. The K-Speed seat does a perfect job in covering the remaining space with the style of the stitched pattern on the black leather giving the scrambler seat the distinct impression of being just for one. To give the bike that further stripped down look the side covers were removed and drilled with mesh inserts acting as shields from the inside. Even the custom chain guard gets in on the theme with more circles than a corn crop cut into it overnight and the new sprocket cover has the same effect, with the partially exposed sprocket looking like it’s ready to chew you up and spit you out! However there is no escaping the fact that Eak’s main visual effects come from his unique use of black paint that is not as simple as the standard murdered out job. A mix of satin and matte gives the Triumph the appearance of being a rolling black and white photo even in broad daylight. And nowhere is this more evident than on the classic Bonnie tank with the satin black and flat white laid down without any pin-stripping to interfere with the effect and the Triumph logo given the same treatment. The theme extends across the build with the drilled covers finished in matte, while the engine features a mix of satin black on the block and barrels and matte on the side covers. It’s with this theme in mind that the flash back to the days of black and white photos of Bonneville’s that the pipe wrap and Firestone tyres makes perfect sense. Either chrome pipes or modern rubber would instantly ruin the illusion and it’s not until Eak stands next to the bike you realise the photos are in full colour. This clever use of contrast is not easy to envision on a half-finished bike as the look only comes together when the final bolt is fixed in place, but further adding to its consistency are the wheels. Given a new coat of his own favourite black hue the spokes have been milled back down taking off enough metal to provide the contrast cut look that normally costs thousands of dollars from the likes of Roland Sands. The next step was the buried stance “It’s easy to ride with low rider style, it’s more easy to control and It’s look nice for me,” explains Eak but while you can get the look with a simple cut you cannot get the control. There is no half measures here with the front forks properly lowered, new progressive lower springs and reworked internals to match. With the weight lower and rolling on the heavier vintage rubber the rear has been stepped up with quality YSS rear shocks with K-Speed finding a set designed for a Harley Sportster having the appropriate level of dampening. A pair of fork boots hides any chrome and gives the vintage look while the upper parts of the stanchions that would have been exposed are blacked out too. But there is no mistaking that the engine is the modern Bonneville unit with its mock carbs feeding the fuel injected 865cc lump. Just as he isn’t afraid to cut up a brand new bike, Eak is also happy to mess with a modern ECU and with the factory map downloaded and given a tweak it’s been flashed back to make best use of the modifications and smooth out the fuelling. Under that pipe wrap comes the biggest improvement to the engine with a lightweight set of handmade pipes venting back to the twin mufflers taken straight off the shelf from a K-Speed store. Being a fuel injected machine it made perfect sense to keep the factory airbox but the stock filter has been replaced with a high flowing Hurricane unit, a popular brand in South East Asia. Delivering one of the few modern touches to the build is an LED projector headlight that is designed for a big Harley Davidson tourer but again it’s a brilliant choice with the stark white nature of the light feeding right into the black and white photo feel. The barely there turn signals are mounted each side of the main lights at each end with clear lenses keeping the look on track. The vintage styled tail light sits on Eak’s own new rear hoop and this is the view that he’s hoping the other Bonnie’s of Bangkok get on a regular basis. The ever popular relocation of the ignition barrel has been taken care of and a single speedo cleans up the front end drastically. While the new flat bars prevent the low down look being disturbed they also play home to the only bits of colour on the bike, the two small red buttons on the switch blocks.

Off the work bench and on the road it’s clear that the main man of the ever-growing K-Speed brand has pulled it off again. Eak might spend just as much time with modern Sports bike and ensuring that his Thai customers have the latest parts from around the globe, but in his quest to bring some old school British cool to his homeland you cannot question his motives for the wrap and stones. Black Bulldog can run the streets at night and bark into the air without fear of encountering another like it amongst the 15 million folks who call Bangkok home. So why not enjoy the best of both worlds, the look and feel of an old classic to warm his heart and the comfort of knowing there is always a plethora of modern missiles back home should anyone want to challenge the need for K-Speed!