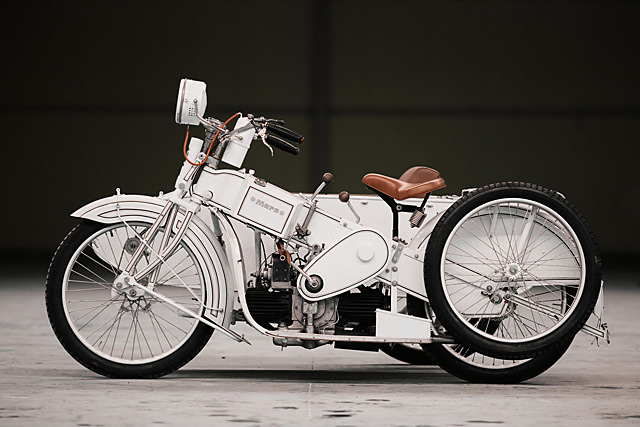 As I’m sure you’ll agree, today’s custom motorcycle scene is a global phenomenon. But if you had to pinpoint the birth of it all, surely it started with returning servicemen in the post World War II period who bought up army surplus bikes on both sides of the Atlantic and bobbed and chopped their way to individuality. But what about the pre war machines? Or those that were built for the war effort with large sums of government money thrown at the manufacturers to get an advantage over what the adversary was creating? Enter Russia’s ‘Motorworld by V. Sheyanov’ – a collection of specially developed military motorcycles with engines over 800 cc, sidecar-wheel driven motorcycles, and the odd 4-cylinder. Today, Motorworld’s representative, Peter Moskovskikh, brings us one of the true prizes of his collection; the iconic German built Mars A20, which began production in 1920. With only 1000 units produced over a twelve-year run, this bike remains a certified classic of the period. Mars was one of the earliest motorcycle manufacturers starting production of their two-wheeled terrors way back in Nürnberg, Germany in 1903. As a company they rode the roller coaster of German politics and two World Wars but for a little over a decade between these global conflicts they produced some of the most advanced machines on the planet, the most famous of which is the Weiße Mars (White Mars) consisting of the A20, MA25, MA27, and MA1000 model range. The A20 is an unusual machine to say the least, there is no frame in the usual sense of the word but a box section that runs from the headstock down to the rear wheel. This box section is home to both the fuel and oil tanks and given that no ordinary man rode a motorcycle there was also a glove-box built-in for one’s prized possessions. From the headstock forward things are conventional from a mounting point of view but the fork design was both revolutionary and some what out of the box. Technically speaking it is a trailing link fork setup but the obvious girder elements are there with the upright shock, later Mars models would move to a traditional girder design having been developed on the unique A20. The rigid rear is somewhat offset by the twin rolled leaf springs on the side car that made for a relatively comfy ride for the period. However braking in the ’20s was far less sophisticated and although there were hand and foot controls the method of deceleration was via the transmission, break the chain and you’re effectively sitting in a runaway vehicle. Additional comfort for the rider came from the twin spring seat that effectively allowed the seat post to move down into the frame and with front suspension design created a machine with less dive that most modern motorcycles nearly 100 years on. Powering this remarkable contraption is a stonking four-stroke, flat twin, aircooled, horizontally opposed and a mind warping 956cc capacity engine. At a time when a 50cc was considered more than adequate for many of the A20’s contemporaries Mars had enlisted legends of big capacity engineering, fellow Germans, Maybach to design and build the engine. While horsepower figures were believed to be just over 7hp at the wheel and 12hp at the crankshaft the enormous 95mm stroke meant torque was never an issue even with a passenger and sidecar. Firing the Maybach engine required a firm crank of the hand start that protrudes to the riders left before a single magneto took over and powered the ignition. There was innovation everywhere when Maybach drew up the design and it functioned just as well, the camshaft is centrally located but driven by two gears off the crank while each valve has a rocker arm that makes direct contact with its own lobe. With all that torque only a two-speed box was required, however this too was revolutionary with twin clutched drums mounted to a cross-shaft that both had their own chain, one drum slowing down as the other was selected. Despite the magnificent Maybach engine and the fact the A20 was available in a range of three colours it was the austere minimalistic white that became the distinguishing colour associated with the model and gave it its name. The engine sits in a subframe allowing the boxed frame to be unimpeded as it runs from front to rear allowing for a huge canvas with which to work. But it was the boldness of the white only broken up by subtle pinstriping across all the metal work that made such a statement in an era of black, black and a little army green. From the swooping front and rear fenders, to the enormous sideboards that dwarf the actual frame and the attached sidecar, there was white as far as the eye could see. You made a statement riding a Mars and that was further enhanced by the superb leather work that covered the riders seat as well as being lavishly used throughout the sidecar and its rear storage compartment. While the frame featured just the basic Mars logos on each side the headstock was given the full fare but in the bleak periods of the depression you didn’t have to be close to know this was a White Mars. So good was the Mars A20 it took out the Championships of Bavaria in 1921 filling the top two places, was honoured with its own postmark in 1983 and was the favourite vehicle of iconic American newspaper man Otis Chandler. For Peter Moskovskikh who oversees an incredible collection of vintage military vehicles it is easy to see why the Mars is such a treasure, ground breaking styling, thunderous Maybach engine and luxury of a kind that just wasn’t seen in its day. But like so many manufacturers of the period Mars would fold after the war and so it’s up to dedicated enthusiasts like Peter to maintain these icons so that we can all understand a little more about where the motorcycles we ride and treasure today, come from.