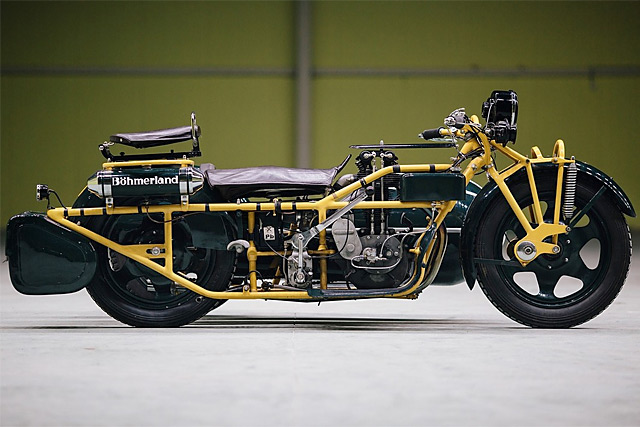 “They don’t make them like they used to.” We’ve all heard the older generation groan it, oil dripping down the inside of their riding boats. But to be able to own a modern superbike dripping with MotoGP technology first there had to be more than a hundred years of development – in factories large and small – all over the globe. Some got it right, some got it wrong, But it is the evolution of the motorcycle we must always appreciate, its many off-spring is the thing that brings us all together as bike lovers and one pre-war big brother made more than a single innovative contribution to motorcycling that lives on today. That bike, the one before your eyes, is the Böhmerland 600 (or ‘Cechie’, as it was known domestically.) It’s the brainchild of Albin Hugo Liebisch who was born in Rumburk in what is today the Czech Republic. Liebisch was a bicycle mechanic until the outbreak of WWI where he was badly wounded on the Eastern front. After the war he took a number of jobs before driving heavy vehicles for flamboyant businessman and sometime race car driver Alfred Hielleho, who would finance the early years of the Böhmerland Motorcycle company. And thank your lucky stars he did. It was Liebisch’s designs of a long wheelbase motorcycle, an OHV motor with a large capacity, a built-up leading-link front fork and solid cast wheels that captured Hielleho’s imagination and garnered his support. With the first prototype finished in 1922 it would be three more years before a completed production model could be fully evaluated and happy with the results in 1925 the first Böhmerland factory was opened in Schönlinde. Here the building of the more than three metre long frame began the process that all took place under one roof with only a few components sourced from elsewhere. The duplex frame is made from tubular steel with vertical and horizontal reinforcing bars and resembles a drag bike frame from the 1980’s. Basic but strong in design its sheer length had enough space for a uniform dual seat behind the motor and a third seat above the rear wheel. The rider and passengers sat astride the machine in bicycle style but where well supported with sprung leather seating and a multitude of hand grips and footrests. Yellow was a common frame colour on the Böhmerland with Red the most popular colour for the tins and sidecar, making this Vintage Green example particularly unique. The bomb shaped sidecar with plush leather seating and plenty of room was a popular addition although some solos still remain. The main frames suspension consisted of a rigid tail section that was part of the main frame member and not a secondary piece. As such to make both steering and ride quality up to the high standards he set Liebisch had to create a unique and complex front end. The fork used tubular triangular blades with internal reinforcement elements that were welded to cross bridges. Short horizontal arms and the lower ends of the strong vertical springs were attached to the lower parts of the blades. The cantilever design mean both leading arms and the yoke were effectively sprung allowing for maximum control of the front wheel. The sidecar uses coiled leaf springs that assists the lever bar mounting for an ultra smooth ride for the lucky passenger who avoided sitting over that rigid mounted rear wheel. Powering the Böhmerland was an engine also of Liebisch’s design but unlike some of the previous pre-war machines we have featured this is a strange piece of kit largely uncopied to this day. The single cylinder displaced some 598cc making it not unlike the thumper engines of KTM and Honda, where things get crazy is the bore and stroke ratio with a massive 120mm stroke and slim 79.8mm bore. The modern engines are almost the polar opposite, a stroke that long resulted in a redline of just 4000rpm for 16bhp but the torque was truly phenomenal. An early example of OHV technology the valve train was exposed to the atmosphere with the actuating rods running up the right side of the engine making for a truly spectacular visual sight. One of the down falls of this design? The exposed valves received no forced lubrication and thus the rider had to use a provided oil cup to give them a splash at every stop. Fire the engine back to life and half that oil went all over the rider, so best not to be wearing your Sunday best if you ever ride a Böhmerland. The rest of the engine did receive forced lubrication through a system that started with a frame mounted oil tank, with an external pump that fed oil to the engine and then onto the geared drive train. While more advanced than the oil supply to the valves it was still an open system with no return so the oil was literally burnt off rather than recirculated. By this time in a motorcycle article there should have been some mention of the form and function that is a bikes fuel tank. Well folks, there isn’t one! Instead the 600 draws its fuel from three 5 litre cylinders, two mounted to the sides of the frame and one underneath it. The result was a fuel line of some 2 metres that then fed a carburetor that was mounted roughly a foot from the engine. It seems Mr Liebisch liked more than just his frames long, but the extra length of the inlet tract did result in excellent air/fuel atomisation and airspeed, further improving the torquey nature of the engine. The three speed switched transmission was more than enough gearing for such a low revving engine, but a military spec version had nine ratios with a second gearbox operated by the passenger. The wheels are made of cast aluminum, some 50 years before it became a popular addition to motorcycles, with circular openings and reinforcement around the center boss. Later models were eventually made of stamped steel in the last years of production, but Liebisch did not change the design despite the deteriorating economic conditions of the Nazi occupied 1930’s. The tyres were also a statement of their own. When 20inch rims are considered big today for the Harley guys our man Albin was rolling on 27’s in 1925 and make the Böhmerland an imposing machine on the streets. But with the outbreak of WWII his factory was taken over for the military effort and as he refused involvement Albin and his son were sent to a Czech gulag where they were forced to work manual labor at gunpoint. But even after the war, he had plans to strike back with a new 200cc machine, but his company had been destroyed, the factory in disrepair and despite his excellent reputation the hard years had taken their toll. With his passing it was said that he had always loved the company of fine women, hated the politics of the war but would be remembered forever thanks to the 3000 innovative machines he produced in the hardest of economic times during two World Wars. He was a man many years ahead of his time, but shared a lot of the passions that bring us together today as a motorcycle community. [Via Motorworld by V. Sheyanov]