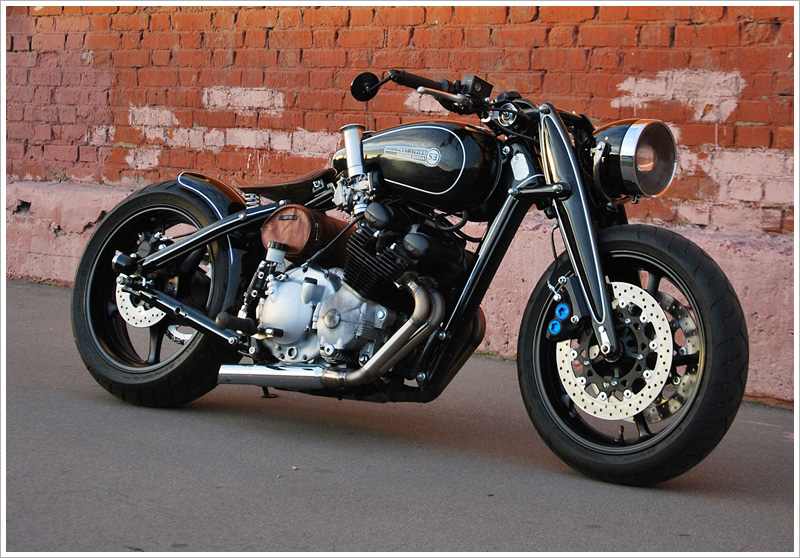 Some bikes we receive come served on a platter with amazing photos, hilarious quotes and pages and pages of information from the builder. Other times we have to work for it. Like this amazing DKW which was spotted in some random Moscow motorcycle club photos. After a bit of detective work and a couple of emails to our ‘friends’ in the Russian mafia, we quickly tracked down the owner/builder. His name is Vasiliy Arkhipov and as you might have guessed from looking at this bike, he has some skills up his sleeve. After working in the automotive industry for over 7 years, Vasiliy who is only 30 years old, now works in the aerospace industry as an industrial designer, specializing in carbon fibre. So he decided to use all of his talents to create a bike that is out of this world. To fully appreciate the build and the bike, I have to give you a really quick history lesson on Russian motorcycle manufacturing. It might sound like something out of a Russian spy movie, but this bikes history started back in 1945 when drawings and equipment were taken back to the USSR from the German motorcycle manufacturing plant DKW. They made an almost exact copy of the legendary DKW NZ350 at the Russian plant called Izhevsk, and named it the IZH350, which became one of the first production motorcycle in Russia. Here’s Vasiliy to tell us more about this unique project. “A good friend of mine got one German made 1938 DKW  in very poor condition and he also had some parts from the IZH. In Russia, the bike is valuable to collectors so we decided to reincarnate it. We had a spare engine from Yamaha Diversion, which we decided to use. Wheels and brakes were taken from a Yamaha R6. Then we had to redesign the frame, making the motor fit inside it. After that we redrew the tank, making the diffusers for carbs that hides the filters. Rear wing, graying and bracket for registration number all made of carbon fiber. The electrical system and battery are located in a leather box under the seat.” This ambitious project took Vasiliy around 10 months to complete. “At the end, I’ve got a very comfortable bike for every day use” he says. We think he got a lot more than that. Vasiliy has built a stunning bike that is part vintage, part modern, part historic, part futuristic, part innovative and part genius. And my favourite part? Those carbs going through the tank.