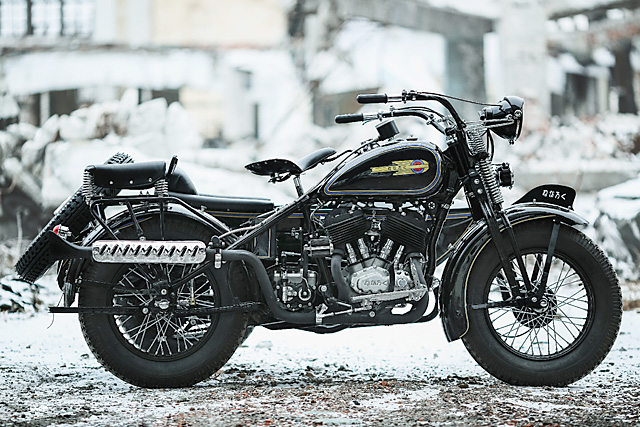 For many decades it was a mythical creature, believed destroyed in a nuclear apocalypse that shocked the world and any documentation of it’s existence deliberately destroyed. Even the official historian of a very large American motorcycle manufacturer with a strong connection to the machine believed any trace had been lost forever. But of all places, the war time Kurogane Type 95 motorcycle by Japanese corporation Nihon Nainenki appeared on US television in a brief scene on the hit show “I Love Lucy” in the ’50s and ever since collectors and historians have been searching for a complete example. With only three remaining in the world and two in the collection of our friends at The Motorworld by V.Sheyanov, we can now present to you this 1939 Type 95, the only “Civilian” version of the sidecar equipped V-Twin beast anywhere in the world. Before the Japanese motorcycle industry became what it is today, with large dedicated manufacturers dominating the world market the industry was made up of small suppliers who provided components to assembly plants often owned by companies that had no interest in motorcycles other than as another product to sell. For many years one of the suppliers to the market was Harley-Davidson with their flathead engine used in an array of makes and models, but as the Second World War approached and Japan isolated itself the military took control and Nihon Nainenki was contracted to supply the side-car equipped Kurogane (meaning Black Steel) Type 95 for military use and in service of the Emperor. But when the Atomic bomb was dropped on the city of Hiroshima the factory that built this machine was totally destroyed and the lives of the engineers and designers lost. The last remaining traces of the Type 95 were deliberately destroyed when troops surveyed the city and all such examples believed lost. That was until an example was spied on “I Love Lucy” and it was clear that at least one US solider had taken himself home a sizeable souvenir. The machine along with it’s side-car was found in California in the 1960s but was again hidden from the world until restorer Steve Rainbolt brought it along to the International Motorshow in Del Mar in 1997 and took out the judges choice award. Just to show how rare a machine it was, even an expert judging panel was totally fooled, as not only was it painted US military green instead of the correct black, it had a surface restoration and didn’t run but that didn’t stop the judges from also naming it “the rarest motorcycle in the world”. But when the bike was purchased by The Motorworld by V. Sheyanov for the Motos of War collection nothing but a complete and original restoration would do and Italian maestro Costantino Frontalini was tasked with the job. “Restoration of military Kurogane was a historical event for my firm, because of extreme rarity of this motorcycle. We moved to a higher level when Vyacheslav Sheyanov has also offered me to work with a civilian version. Actually, there was no serial production of a civilian version of Kurogane, at least there is no existing documentation for confirmation of this hypothesis. The main idea was a representation of a “spoils of war” which was found by an American soldier, then transported to US and repainted to civilian style – a typical story of the WW2 period.” recounts Frontalini. He knew he had a genuine example however due to the presence of a reverse gear and marks where a sidecar would have been mounted and set to work on the mammoth task restoring the Type 95 with no information other than some old war time photos. The frame itself is rigid made from thick walled steel to handle the load of three men and a sidecar, with extra bracing in all load bearing locations. It’s remarkable how much of the bike is original, albeit restored to perfection and that includes the heavy duty, twin shock, springer front end that provides remarkable stability at high speed and precise dampening in rough terrain. The rigid rear provides no such luxury but was vital to maintaining a reliable machine during war time. But clearly the man to be was the one seated in the sidecar, as while the rider and his rear passenger sat on sprung seats to absorb the rigid’s blows, the thirdman had the benefit of dual leaf springs suspending his carriage like a cloud in the heavily reinforced steel sidecar cradle. The spoked wheels are identical front and rear in all dimensions, so too that used by the sidecar, meaning the mounted spare wheel could be substituted at any time should there be a blow out. There is no braking system on the third wheel but front and rear wear drum brakes to bring everything to a halt. Powering the Type 95, like many large war time Japanese motorcycles, is a variation of the Harley-Davidson Flathead. But despite its American heritage virtual no part would fit a Hog as they were modified and redesigned to fit the unique Japanese manufacturing process and the new and improved engineering needed for reliability. Despite the 1260cc side valve based on the Harley version with a total loss oiling system the Type 95 has a fully internal oil pump. Improving the ignition and electrics is a system that was designed and built by Mitsubishi for the factory in Hiroshima that included a trick magneto. The gearbox is everything you would expect from the Japanese and years ahead of its time. A hand-shifted box that featured three forward gears, reverse for easy maneuvering of the sidecar and neutral with a hill-hold. All of which has been restored back to perfection, starting first go and easily capable of 80km/h with a full load and three men on board. For what was essentially a military vehicle the appointments are luxurious throughout. The Lazy-boy recliner like sidecar seat is large and heavily padded, with high grade leather used on all three seats. All the controls are chrome and highly ergonomical with a very upright seating position thanks to the stretched back bars. An important part of the restoration was the fitment of a period correct speedometer that reads in km/h and the shift panel with stamped Japanese lettering. As the name suggests the bodywork was returned to the rich black it was always meant to be but not before its Italian restorer had poured hundreds of man hours into perfecting the panel work. From the tank, to the body of the sidecar and all the headlight buckets and surrounds every piece is now rust free and metal worked with tender Italian love. One of the many brilliant features of the Kurogane Type 95 is how easily the sidecar can be decoupled turning the three man moving machine into a solo scoot. But why would you want to do such a thing with arguably the rarest motorcycle on the planet that has undergone a big dollar resto and sits in a museum? So you can ride it of course and not just on the flat stuff, but the gents at Motos of War are also happy to take it off road and have a blast in the mud with the V-Twin shooting rooster tails all over those trailing. It is the gift to all that is the “The Motorworld by V. Sheyanov” collection. A place where rare automotive treasures sleep during the night and when the sun comes up you can visit this smorgasbord for the eyes or saddle up and take an old war horse for a ride. Pipeburn is organising a tour to “The Motorworld by V. Sheyanov” collection in Russia. It will be a once in a lifetime experience to a ride some of the rarest motorcycles in the world – and probably drink a little bit of Vodka too. If you would be interested in joining us shoot us an email and we will keep you posted on the details and costs.