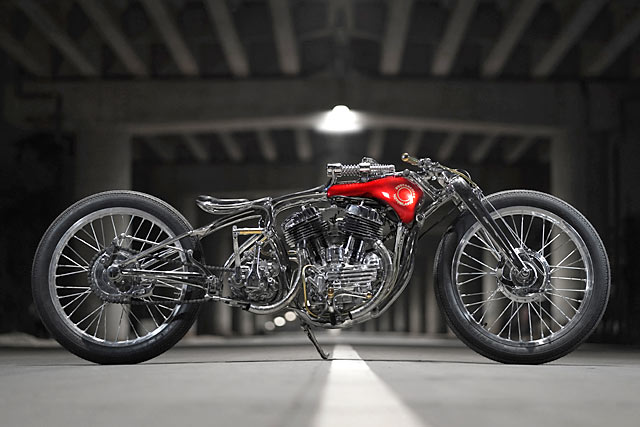 For the best part of a century the custom motorcycle scene has been a counterculture that has traversed the globe and become a universal language for those with a love of modifying their two wheels. But with the corporate conservatives at the major manufacturers now heavily involved and a growing crowd of conformers; that intrinsic free will has come under threat. Never fear, for as long as men like Andika Pratama live and breathe then true innovation and artistic expression will continue to live on. The king of Kromworks, Indonesia, is back with another stainless steel Boardtracker, this time with the beating heart of a 1947 Harley Davidson WLA. 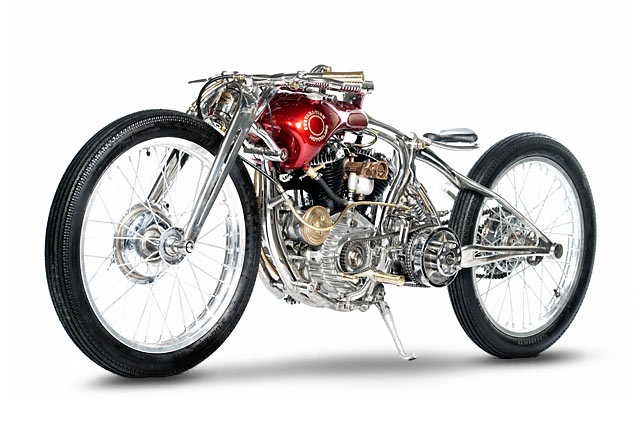 Pipeburn first met Andika in 2017 at the incredible Kustomfest show where he took out three awards, including best Custom Bike, with his previous stainless boardie. But 2018 brought new challenges, “This bike was created as an iconic bike for Suryanation Motorland which is one of prestigious customised bike events in Indonesia. I built this bike with my friend; his name is Lufti Ardika. We name this bike ‘Tosan Adjie’ which was derived from ancient Javanese language that means Precious Metal,” he explains.

While his previous builds have been based around more modern powerplants, with everything from a thumping EVO to a 250cc single from Cleveland CycleWerks, this build required something a little different. To go back to the true glory days of board track racing would require the use of an engine a 100 years old and not easily available in Indonesia. But a unit from a ’47 Harley was the perfect middle ground and would look right at home at the centre of the sort of contraption Andika had in mind; plus his intention was never to follow the rules to a tee. 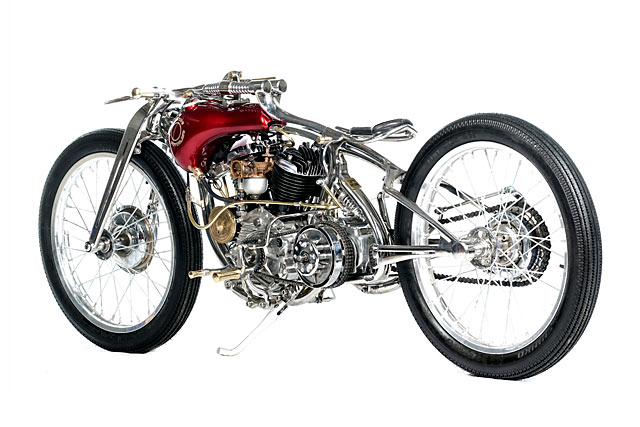 “Yes, some countries have been the barometers, besides I keep myself updated with the latest trend from Japan and Europe. But I do not really copy others’ designs. That is why I designed this bike using my own imagination.” And with that the master sculptor was ready to get started and selected a batch of 316 stainless steel from which he would craft much of the bike. Polished up it looks incredible and offers superior corrosion resistance, but it’s not the easiest to weld or work with and can be susceptible to contamination requiring an ultra clean working environment. 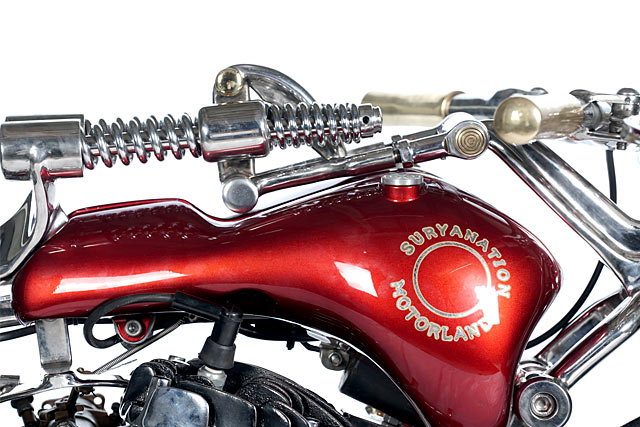 The frame might be a rigid designed to cradle a Harley V-twin, but that is where convention goes out the window. The steering head is designed strictly to work with the front end to come and the swooping down tube is formed from plate, with a detailed centreline, rather than traditional tube. The back bone too has plenty of mass emerging from under the tank tunnel to smoothly form the rear shock mounts for that unusual front end. From the centre post back the open space between each piece replicates the look of the front as it ties into the rear hub.

[superquote]“The frame might be a rigid designed to cradle a Harley V-twin, but that is where convention goes out the window.”[/superquote] 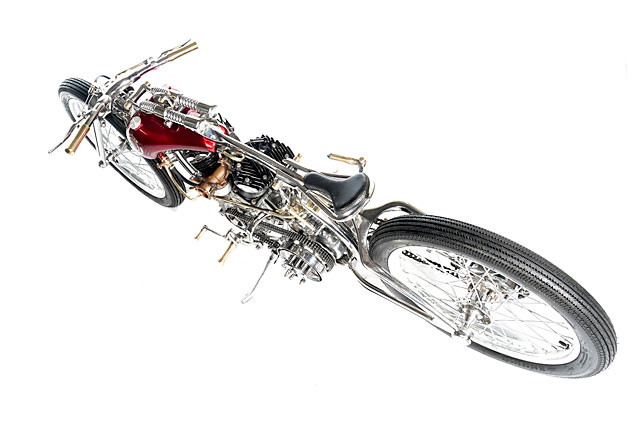 The front end is trick as hell and took a great deal of trial and error to get dialled in. “It did not function properly at first. But that was the challenge that I had to conquer, and finally it functions as it should,” smiles Andika. The legs are made from plate and given the precision needed for suspension components, the stainless had to be braced during welding due to its desire to bend under heat in any direction. Above the tank a pair of springs take care of dampening the force that is transferred via a set of handmade linkages. 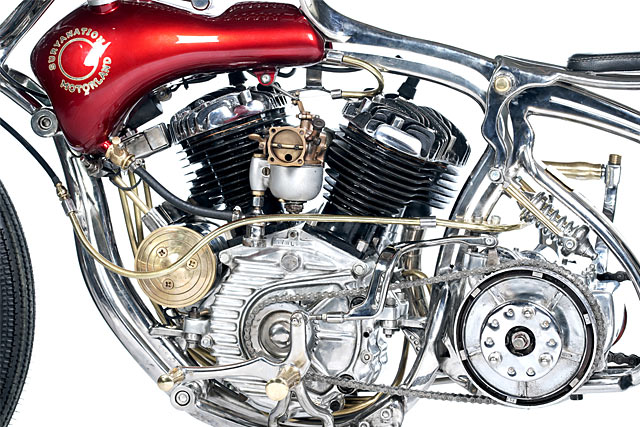 The rigid rear doesn’t have any give but wanting the rider to do it in comfort Andika decided to go with a sprung seat. Of course he totally ignored convention and created a stunning setup that pivots on the frame to a lower spring that has more of those stunning brass capped linkages. The strength of the stainless allows for an ‘open’ seat base, with a small leather upholstered unit sitting above, almost floating in mid-air. Now the stretch to the bars could be determined and the beautiful one piece items are finished off with brass grips. 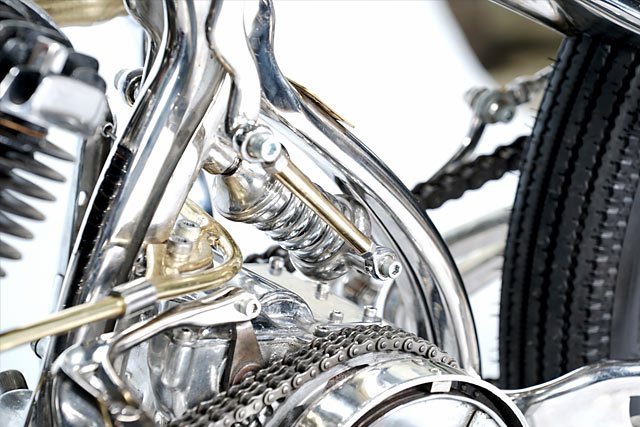 With all that polished metal the candy red tank breaks it all up and the shapely design softens many of the harder angles. It’s a split design with fuel on the left and oil on the right, twin fillers and hard lines take care of entry and exit. Each cable on the bike is run in a unique way, with some sheathed, others running through brass and others exposed in parts. It’s all part of creating a visual symphony that is finished out with the massive 21 inch polished rims wrapped in E270 Shinko rubber for that proper old school vibe. The foot controls are fixed in the mid position and once again all the incredible fabrication work is done in-house from more expensive stainless. 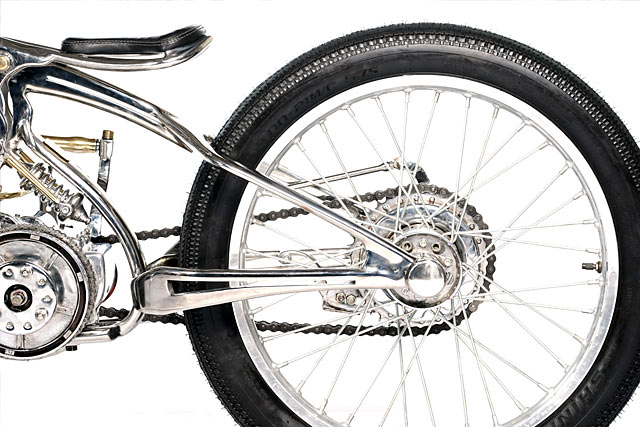 Actuation for the rear brake and gear selection is done via neatly crafted rods that like the sprung components use a set of linkages to pivot off the frame. The result is that wherever your eyes look there is a moving mechanical masterpiece. That’s before you take in the 750cc V-twin engine and Andika made sure it makes a hell of a sound with a set of custom pipes. And if they don’t the frighten the bejeezus out of you then the open primary chain and clutch will do the trick. And that typifies the attitude of Kromworks and their creations, incredible machines built just the way they like them with a flip of the bird to prevailing social norms.