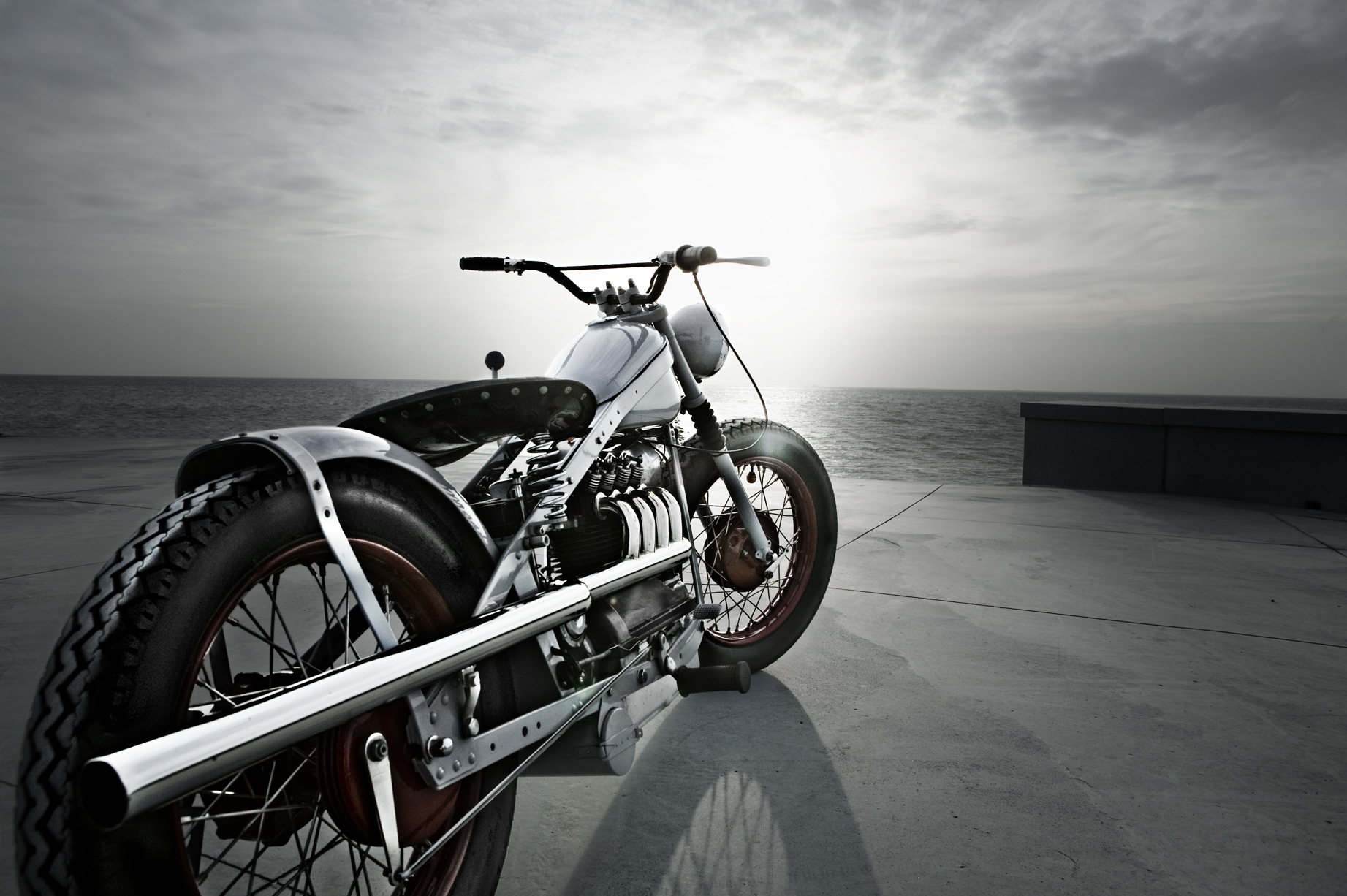 Kim Scholer’s Nimbus Bobber is one striking bike. When he’s not riding it around Japan, you can find him cruising the roads of Denmark. We asked him a few questions about this interesting build.

What kind of motorcycle is a Nimbus?

It’s the only Danish bike produced in large numbers, and it was used for just about everything. 750 cc ohc straight four engine, 22 bhp, shaft drive, steel strip frame riveted together. They built 12,000 of them from 1934 through 1959, with only few changes. This is good for the spares situation, so an estimated 8,000 have survived. The papers for this one says 1950, but there are bits and pieces from many other years.

Why did you choose a Nimbus?

Mainly because it’s slow and reliable. I tend to go too fast when riding modern bikes, so for safety and to keep my license, this is better. It’ll cruise all day at 50 mph. My other bikes – an XS650 and a couple of MZs – aren’t particularly fast either. In addition to that, I really dislike wrenching, and I’m not too good at it anyway. Impractical when I prefer old bikes, but that’s the way it is. Fortunately Nimbus parts are cheap and easy to find. It’s a bit slow and underbraked these days, but I can still use it as an everyday tool. Obviously the bike is not stock. What did you change and why?

When it comes to laws about modifying bikes, Denmark ranks somewhere in between North Korea and Burkina Faso, so serious modifications are out of the question. When the bobber craze came back some years ago, I figured I’d go with it, as I could build an almost legal modified one. Besides, I didn’t want to leave it all to the Harleys and Triumphs.

The front fork was cut down about three inches and the plate type handlebar was replaced with a moto-cross type. This was an interim solution, so I could see how the WLA-type bars should be bent. After a while I started to like it this way, so they’ll stay. Switch gear and grips are  from an East German MZ. The stock rear fender is shortened, headlamp is an Indian replica with VW intestines. A fellow Nimbus rider in Florida bought ‘The Peace Tail Light’ on ebay for me. Kickstand is off a Suzuki, and the seat is a stock H-D item, with a Saab door hinge beneath it. I once rode a Nimbus across the USA, after which I swore I’d never go further than the Copenhagen city limits on a stock saddle.

18″ Harley rims replaced the stock 19″ ones, and the Avon sidecar tires are chosen because I like the zig-zag pattern. Then there’s the gearbox, a modern four-speed constant mesh item. It cost US$2,600, about a quarter of what the bike is worth now. When I got used to it, suicide foot clutch and hand gear change works fine even in city rush hour traffic.

The stainless steel exhaust system was made to look like that of an Indian Four. It was beautifully done by a friend of mine. Took him three years do do it, though; he’s very good, but he also smokes too much funny stuff.

Did you encounter any problems when building it?

Not really, except my own laziness and a painter who kept screwing up things big time. Before starting this project I drew and redrew the bike probably 50 times, to make sure it’d look right. Unlike with other bikes – Triumphs, Hondas, whatever – if you change one thing on a Nimbus, suddenly eight other things look wrong.

Now it’s much more comfortable than a stock Nimbus, which – being an early 1930’s design – was designed for shorter men than me. When touring I mount a pair of highway pegs out front, so I can stretch my legs once in a while. I’m 55, mind, not 20. How do people react to the bobber?

Favorably, without exception. Fifteen years ago they would have considered stabbing me at the annual Nimbus Club rally, but these day they all love it. The other vintage guys know I have a few more stock ones, so it’s cool with them too. The police stop me every so often, for other reasons, then once they realize I don’t have ‘fuck you’ written across my forehead, they usually compliment the bike. So far they’ve never mentioned the most obvious irregularities, like the missing front fender. Some years ago I rode it around Japan, where it opened a lot of doors for me, too. [Check out Kim’s blog to read about his Japanese road trip]

If Danish laws were less restrictive, what would you build?

Well, in an ideal world I’d hand somebody else my drawings and a blank check, and tell them to have it finished in a year or so. But seriously, my favorite project would be a very long, straight eight Nimbus with hub centre steering, done in steampunk style. I figured it’d take me five to eight years to build, and cost about US$60,000.

Somewhat less impossible would be a 1941 Indian Chief, the one with large fenders, rear suspension and the odd spring front fork, and with two Nimbus engines in a 10 degree V shape. One cylinder head turned around so a carb in the center could feed both engines, which of course should be mounted lengthwise. I’ve measured; there is room. Just. Second choice would be the same Chief with a Vincent engine, much like the one made a few years before both companies went tits up. The latter would actually be legal here.

Realistically, there may well be an electric Nimbus in my own future. Also I’m planning to give the XS650 a ‘1960’ look, with speedometer in the headlamp, steel rims, shrouded suspension and so forth. There are thousands of fine XS bobbers, XS café racers and XS street trackers out there, but I’m not in the habit of building what everybody else builds.