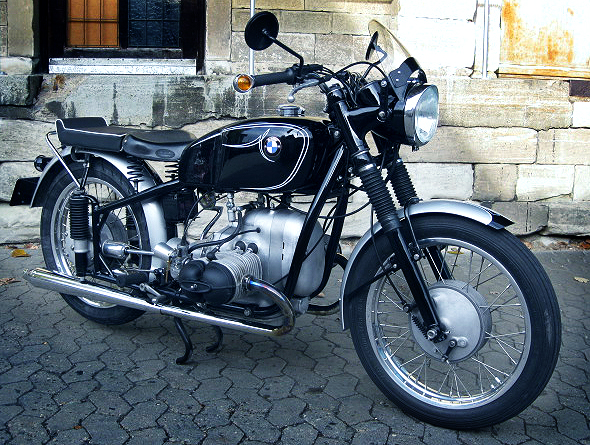 Steven Whelan is an American living and working in Germany. Over the years he has amassed a motorcycle collection that Jay Leno would be envious of. Some of his bikes include a 1936 BMW R12, 1952 BMW R51/3, 1964 BMW R69S, 1950 Vincent Comet and a 1962 Triumph 6T Thunderbird that was restored as a copy of the Steve McQueen fence jumping German bike from the film “The Great Escape”.
So when he decided it was time for a new project, Steven had his mind set on building a Rocker-styled cafe racer, inspired by the 1939 Supercharged Schorsch Meier BMW Type 255 which won the 1939 Isle of Man TT. “I found a complete 1953 R51/3 and started the project by finding an aluminium specialist in Germany that had already made pre-war racer style aluminium tanks and mudguards” says Steven. The frame was then modified by welding anti-flex reinforcement and adding a pre-war  style 2-spring seat. A replica “Rennbrotchen” seat extention was  added allowing the rider to flatten out while driving. After searching many biker flea markets and through contacts, Steven was able to find several unsual and rare racing parts from the 1950’s and 60’s. I will let Steve tell you about all the specs and mods: “The wheel hubs are original Hoske racing full-width hubs; a Rausch headlight sporting a peaked Hella chromed rim holds both the 3″ speedometer, tach and 700cc Keyser cylinders with modified heads replaced the original BMW 500’s. Added to the engine were two Mikuni VM 28mm carbs with replaceable K&N filters or polished inlet tubes, & replica Hoske racing exhausts. The gearbox had the original air cleaner mount machined off to resemble the pre-war machines and was re-built using 4-speed racing gears. The front fork is a 1960’s Ceriani  that was originally sold in the 60’s as a replacement for the BMW /2 series Earl’s Fork, but was shortened to retain the original R51s wheelbase. Handlebars and mirrors are from a R75/5, tail light is a Miller/Vincent replica and a modern fly screen was fitted. The silver mudguards with black tank & hand pinstriping was used to give a more Rocker look & feel to the bike. Lastly the classic Avon Speedmaster Tires were fitted to the aluminum rims.”

As far as vintage racers go, they don’t get much cleaner than this. The attention to detail is superb and apparently, so is the handling. Steve tells us he is still breaking this beautiful Beemer in, but did “reach 70 MPH in one burst, and on curving roads the bike handles superbly.”