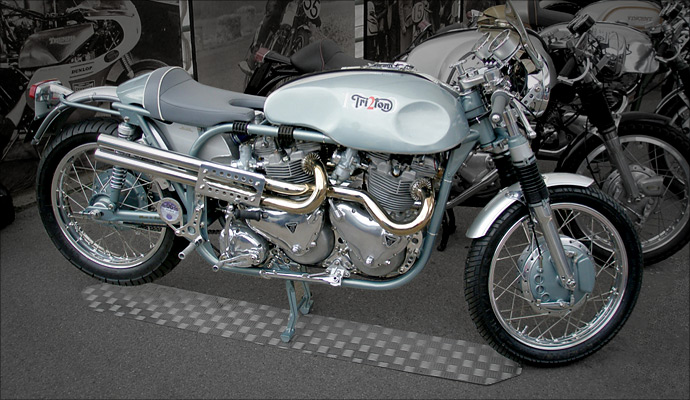 Peter Andrews isn’t a guy to do things by halves. For us mortals, just owning an authentic Triton would be more than enough of our prayers answered, but Pete decided to do just that little bit extra. Well, 100% extra to be precise. He’s not only got himself one of the world’s sweetest café racers, but he’s gone an added an extra damn engine to it.

The 1298cc Tri2ton has blitzed the British show scene, taking out this year’s Classic Bike magazine’s Bike of the Year award amongst strong competition and also managed to win out over a Falcon creation in another. I was sort of shocked to realise that it hadn’t already done the round of the bike blogs – so read up & enjoy.

Pete had had the idea of a twin-engined Triton banging around inside his skull bone for 40 years before he took the plunge in 2009, spurred on by a mate who found the extended frame and was planning to on-sell. In a classic “you only live once” moment, he bit the bullet and decided to go for it – something I think more of us need to do once or twice in our lives. And go for it he obviously did. How’d you like to able to stand next to this little beauty and call it your own?

Waking the beast is accomplished by kick-starting the rear engine while the front has it’s decompressors open. Then the front one is effectively started by the rear. Once both engines are running, the noise is reported to be phenomenal; somewhat akin to a racing V8. I can only imagine what it’d sound like under full throttle, but I dare say small children and those with weak constitutions should stay well away.

Despite the extra 8 inches added to the overall length of the bike, the thing still wanted to lift the front wheel when the petroleum was liberally applied, forcing Pete to change the gearing to keep the monster machine from doing it’s best impression of a jet fighter.

Full points for aesthetics, too. You see too many show bikes that are just stupidly overdone with enough sickly metallic flake, vivid colours, and other assorted tacky bling to turn a healthy person into an instant diabetic. But somehow the bike manages to be both outrageous AND beautifully restrained, all at the same time.

Other mods include a Matchless gearbox, Bob Newby racing clutch and belt drive, four independent magnetos (allowing the cylinder firing order to be set to pretty much whatever you like), custom Hagon shocks and Suzuki GT750 drums on the front. The compression was lowered to 8.5:1 and the two Triumph twins skim above the asphalt on Metzeler Laser tires.

If you’re reading this Pete, amazing job. If I was wearing a hat, it’d be off to you right about now…

P.S. Many thanks to Classic Bike magazine for the details and inspiration.