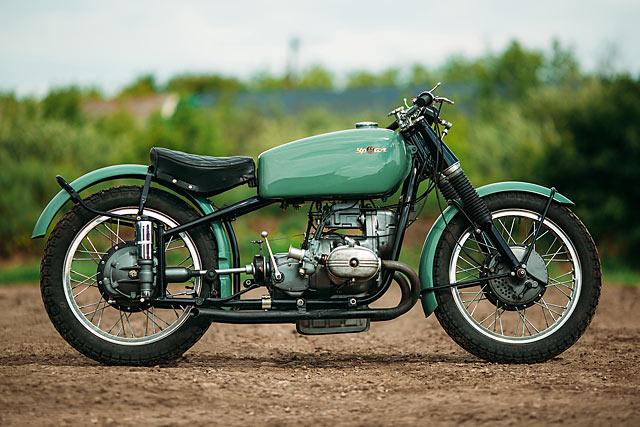 In the early 1950s, the Central Design Bureau of Motorcycle Engineering (sounds like a real fun place to work) in Serpukhov received an official-looking brief from Moscow to carry out the design and research work to create a motorcycle with a boxer engine and a capacity of 500cc. A key part of their brief was the requirement to make the new bike as cross-compatible as possible with the outgoing M-72. The two motor works already manufacturing the M-72 – Irbit and Kiev – got to work. In 1954, the first experimental M-52 with a motor designed by the Central Design Bureau was ready for testing. The features of its new top-hat engine are best described in the CDB report from the time, “The engine is largely based on the use of M-72 engine parts, for example, a series of crankcase was used with minor changes in the latest processing operations. The diameters of the crankshaft necks, piston pin and rollers with separators remain unified with the corresponding parts of the M-72 engine.” Clearly, Moscow was more interested in backward compatibility than spending their hard-earned Rubles on innovation. And with a looming space race on the horizon, could you blame them? The pushrod valve train was borrowed directly from BMW’s R-51/3 road bike, but with typical Russian ingenuity the design was promptly improved on in various ways, including cylinders that were cast from an aluminum alloy with pressed cast-iron sleeves for the best of both metallurgical worlds. Then in 1957, the party-sanctioned production of the sporty Ural ‘M-52S’, specifically designed for highway and circuit racing, began. It was based on the chassis of the latest racing M-77, but equipped with a specialised fork with a front axle from the M-52. The power plant was a sporty modification of the garden-variety M-52. Testing at the time apparently showed it to be every bit the equal to the legendary BMW R37, which was considered one of the best racers in the post-war years. The M-52S is easily identified by its valve cover sporting three longitudinal ribs. Internally, it also features a few go-faster tweaks including an increase in the compression ratio to 9.0:1 and two bigger, better carbs. All the hard work resulted in the engine saw power being increased to a whopping 35 hp. And with this peak power being delivered at a healthy 6200 rpm, the bike could reportedly hit the magic ton. It’s interesting to note that in addition to the  technical modifications, this speed was also achieved by feeding the little beauty high-octane fuel. Sounds like a lot of effort for a 35hp racer, yeah? Boy, we’ve sure come a long way since then. But the bike’s most attractive feature is probably its collectability. In the period from 1957 to 1961, a meagre 20 units were produced. And to add some nice vodka-flavoured icing onto the Ural M-52S cake, each and every example of the bike was assembled by hand. Speaking of hands, we’d like nothing more than to get our hands on one. Specifically in conjunction with a long stretch of deserted Russian highway and a few hours of spare time. See you there.