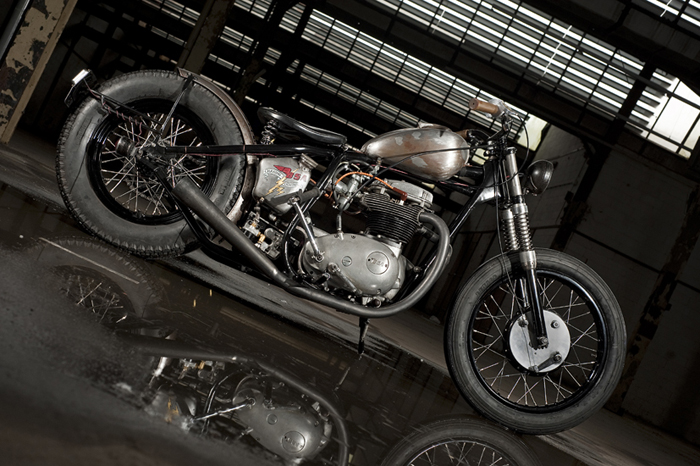 Here at Chez Pipe de la Carbon we don’t know much about art, but we know what we like. And we like this; it’s the work of Antoine Stemerding who is an artist living in the south of the Netherlands. His day job involves building weird and wonderful sculptures, most of the time out of metal. So when he came across a 1965 BSA for sale he decided to turn it into a hardtail. “I fabricated the hard tail frame myself” Antoine says. “That wasn’t a big issue, because I work a lot with metal when I make my art. There aren’t alot of chopped BSA’s in the Netherlands but now and then one pops up.”

The BSA wasn’t in the best condition when Antoine found it. “I bought the BSA as a failed 80s chopper for not much money” Antoine tells us. “After I bought it, I then started thinking about what I wanted to build in terms of style. It is my first build that actually went without any problems.” The bike was built to look raw, unpretentious and show its years of personality. The simple banner and lightning paint work on the oil tank was done by a friend of Antoines who spends his days restoring fresco’s in churches — it’s safe to say this job was a little easier.

The stunning photography of this hard tail was done by fellow Dutchman Floris Velthuis, who shoots a lot of pics for a Dutch chopper magazine. If you want to see more of his bike photography, check out his impressive online art gallery. BYO champagne and canapes.