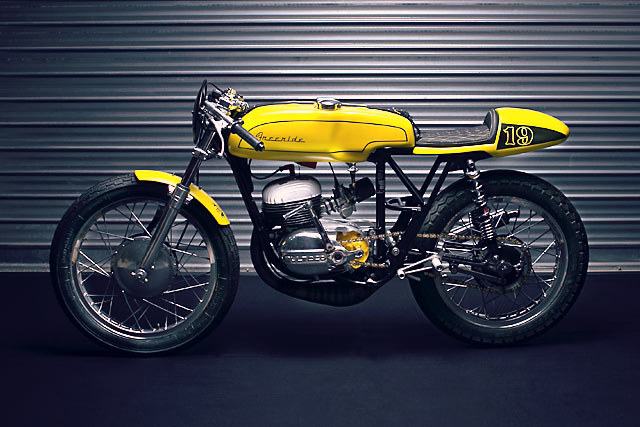 The Bultaco Campera Agricultura was about as far as a bike can get from bedroom wall poster material. As you might garner from the name, it was a bike more at home in the fields chasing cows than it was on the racetrack chasing pole position. But that didn’t let France’s Freeride Moto stop them. Taking their inspiration from the altogether more sexy Bultaco TSS, they rolled up their sleeves, scrubbed off the cow cakes and made a little yellow bullet that will inspire the inner kid racer in all of us. The project started when Pierre, Freeride’s owner, encountered an old 175 Bultaco Campera Agricultura from 1966. With the foresight (or should that be madness) that only the best builders possess, he saw a custom bike that would pay homage to the legendary Bultaco TSS racer. A racetrack staple in the 60s, 70s and 80s, it has a long list of famous riders including Ángel Nieto, Roberto Quintanilla, Râmon Torras and Pedro Alvarez.

And while you may think that a resto-custom like this might require most of the spares to be made from scratch, thanks to the not-for profit LAM Classic company, all the parts necessary for the project were sorted in the blink of a GP racer’s eye. “After disassembly, the frame was reinforced in a TSS Grand Prix style,” Pierre explains. “It was TIG welded, and while we are at it all of the extra tabs were cut from the frame. Our last welds were made to accommodate the racer Tarozzi handlebars.”

The homemade fiberglass tank, a replica of the old Grand Prix Bultaco years, was installed along with a homemade Montesa replica tail-piece. Then a small number plate was put at the front, along with a minimal aluminium mud guard. “Up there, you’ll also find several new Bultaco parts,” notes Pierre. “There’s the forks, which were assembled using parts from a Pursang 250, a Sherpa 350 and a Frontera 125.” Sound’s like a real family affair. Then the whole setup was polished to within an inch of its life.

But the metal collage didn’t stop there. The front wheel was assembled using parts from a Bultaco Campera along with an Akront 19″ rim. Out back, the chrome swingarm is attached to KFX shockers, again from LAM Classic. They are gas charged, made of aluminium and are completely adjustable. As with the front, the rear wheel is a combo deal, but this time with Campera and Pursang 250 components.

Hitting the track apex is handled by billet aluminium ‘bars. Alongside, the controls have been reduced to an absolute minimum, with just some aluminium levers from Amal, Domino grips and a Koso speedometer.

“Then the frame and hubs were painted with a black satin epoxy,” says Pierre. “The paint was done by MidWest Aéro Design, with the yellow and black scheme chosen to resemble a Bultaco Streaker 125, but with a modern touch given by the matte finish and the metal varnish.” The saddle was made by Kabuki Sellerie, along with the lovely leather strap down the tank. “The engine and gearbox was completely refreshed, with a new cylinder and an Italkit piston. Then the old ignition was replaced with an electronic unit from Selletra with an internal rotor. The carb was upgraded with a new Oko 28mm item and equipped with a fresh UNI filter and attached to a Frontera intake pipe,” he says. And a new exhaust pipe was homemade by Pierre from several old 50cc Aprilia cast-offs. And finally, the engine, the crankcase covers have been completely polished, and the left case has been cut to reveal the gearbox output. Look closely and you’ll see that the interior has also been painted yellow. Nice touch. The cooling fins were painted black, and the cylinder head was sandblasted to a matt silver. The over all result is a svelte, racy Bultaco that can’t help but bring back those childhood memories. We’ll ask Pierre if he has any posters for our bedroom walls.