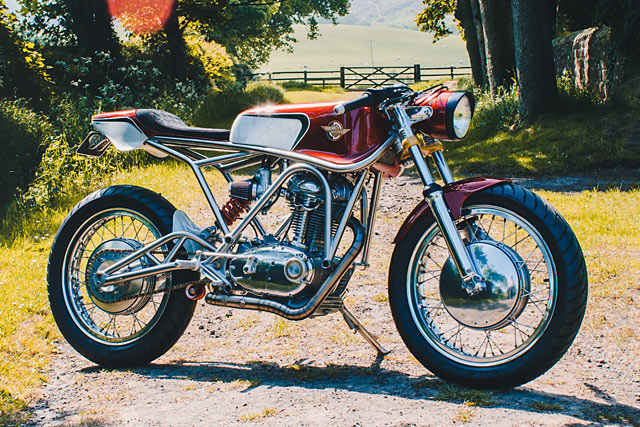 “We started off just doing general welding repairs and custom fabrication jobs,” says Jim from the UK’s Alonze Custom. “There is only me and my Dad here so we’re not a big company or anything.” And as if to prove the point, this beautiful custom ‘67 Ducati’s photos were snapped by his Dad, too. But the photos, like the bike itself, jar against the father and son’s humbleness. I mean, just look at the results. “I built my first bike – a 1954 Triumph – in 2013. Then there was a Honda CB500T in 2015. This Ducati is my third bike, which was finished late in 2017.” Jim says he doesn’t really like calling the bike a cafe racer, but he admits it most readily falls into that category with its single seat and clip on bars. “The motor is a Ducati 350 single. It’s the earlier, ‘narrow case’ motor and I believe it’s from 1967.” The rest of the bike is pretty much all new, as it’s mostly custom fabrication from Jim’s own hands. “I call the bike the ‘Alonze 350 Special,’ he says, smiling broadly. Jim bought the bike in his home town of Scarborough and it was in a pretty bad way. “It had a Triumph 350 motor fitted; something known as a Tricati. At the time of buying it, I had no idea how hard the 350 single motors were to find. After a year of looking, one popped up on eBay in a town called Saltburn (Sounds strangely familiar – Andrew) just up the road from me. It wasn’t cheap and it needed rebuilding. Another year passed before I built the bike and that’s when I decided I wasn’t going to use any of the standard chassis; instead I would make my own bike completely from scratch.” [superquote]“The Ducati motors are such a nice shape. So I guess the design of the motor inspired me to make the bike like it is.”[/superquote]

Jim didn’t really have any initial inspiration for the build; instead he says he just wanted to make a bike that looked beautiful and that matched the classic Italian design of that 350 engine. “The Ducati motors are such a nice shape. So I guess the design of the motor inspired me to make the bike like it is.”

“I started off with a very simple sketch; pretty much just an outline of a cafe bike. I wanted to make as many parts as I could myself. So the first job was to make a set of yokes. I cast them from aluminium – they took some doing tho! I’ll buy a set next time. I then started making the frame and swing arm parts. I made the head tube and steering damper setup, the eccentric adjusters for the rear wheel and chain adjustment and then all the bosses that hold the motor, foot pegs and swing arm.” After that, Jim measured the geometry from the standard 350 frame and cracked on with cutting and bending the tubes. With his build time limited to evenings and weekends, it was fairly slow going but quite clearly he got there in the end. “I started on New Year’s Day 2017, so I aimed to get a rolling chassis by the end of January, then I started on all the body work. I made the tank cover, seat unit, under tray and front and rear fenders; they are all hand beaten from aluminium. I aimed to get these made by the end of February. I then got all the controls made, foot pegs, rear brake pedal and gear lever. I pretty much had it dry built by about June, then I stripped it to polish and paint it all and rebuilt the motor. The engine is what really slowed me down as the crank was knackered! The bearings were shot and there was a crack in the conrod – it took about three months to get that sorted.” As soon as it arrived back, Jim cracked on and finished the build with everything being completed in December 2017.

As to the cafe’s main challenges, Jim says that the whole build went pretty smoothly. “To be honest, the thing I’ve done the least of and think I could have got better was the metal shaping.” Which is all good and well, but maybe Jim’s eyes are a little tired from looking at the bike to often. Just look at that front Fender and think how anyone could do that better. The mind boggles. “The thing I like best about the finished Ducati is that there isn’t another one like it. It’s a complete one-off. I do have my favourite parts; for some reason I really love the number plate bracket. It’s not the most complicated part, it’s just simple and was so easy to make. It sits under the seat unit and you can hardly see it. Also the colours are pretty spectacular when you get them in the sun. The red is a three stage colour and really lights up outside.”