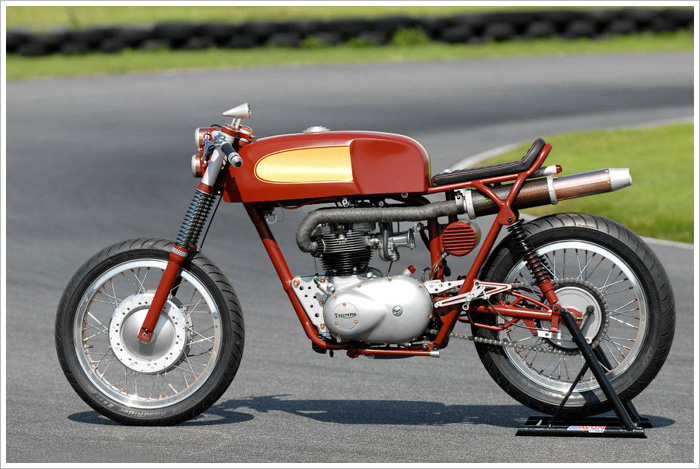 The band Radiohead’s second album “The Bends” was exceptional. However, their third album “Ok Computer” was a masterpiece that blew everyone away and is considered one of the greatest albums of all time. This could in fact be the story of the young Swedish builder Adam Nestor with his creations. He built this exceptional Triumph which was his equivilant of  ‘The Bends’ album. However, before it could receive all the acclaim it deserved (it did win many accolades in Sweden), it was eclipsed by his jaw-dropping Madame Guzzi boardtracker that got worldwide recognition as one of the best builds of the year. Which meant most people (including us) missed a couple of his earlier bikes that are worthy of putting on his greatest hits list. This is Adam’s second build and again he shows off his amazing fabrication skills and creative thinking. The project started when Adam’s dad bought an old 1968 Triumph Daytona off a friend. Lucky for Adam his dad decided to give it to him to work his magic – gotta love dads. The bike was totally stripped down for a radical rebuild. Adam started by modifying the frame, fork and creating the rear swingarm. “The bike has some italian style I think, with the exhaust and swingarm etc” says Adam. The Daytona 500cc engine was then taken apart and reconditioned, keeping the stock Amal carbs and 4 speed gear box. Most of the components on the bike have been hand made by Adam. He fabricated the stunning rear sets, hand grips, ducati inspired exhaust, headlight and oil tank. The aluminium cone that looks like a small speedo is actually an amp meter. The thin seat was also made by Adam and upholstered by Swedish saddlemakers One Stop Shop. The fuel tank is a Dunstall which has also been modified. He choose 18″ Morrad rims with Avon tires. The motorcycle was painted by Adam in a unique red colour found on many Swedish homes. When Adam was given the bike his dad said one thing to him: “if I give you this bike you have to build something cool”. We think he did his dad proud, what do you think?

If you want to see more photos of the build process, check out this detailed thread – in Swedish.