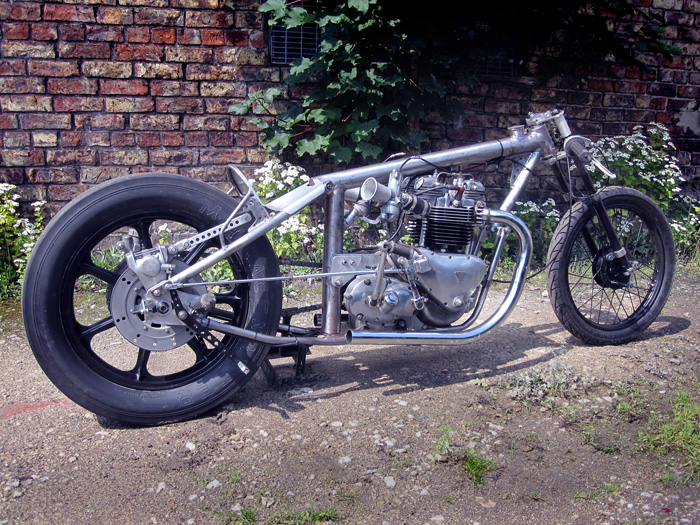 One of the best named motorcycle blogs on the information super autobahn is Eat The Rich — after the classic film and Motörhead song. The blog is run by classic parts dealer Peter Stansfield from the U.K who is always buying and selling custom parts for many different types of bikes. Last year he came across this drag bike frame for sale on ebay and knew he had to purchase it. “I bought the frame for £170 and the rear slick for £10” he says. “I bought it from the guy who originally built it in 1968, he raced it first with an iron 6T motor then later put a Hillman Imp engine in it. It was last used in 1974 when he built a new bike.”

In between running his business and chopping up numerous bikes and cars, Peter has been working on getting this old drag bike back on the track. “Basically, I have just gone through it and put my engine in there; it is a Triumph 750cc with Morgo top eng, 4 plug head, unknown cams and lightened crank. Nothing too wild but I just know riding the thing is going to get the heart pumping. The engine has never been run since I built it. It was originally built for a road race Triton many years ago.”

It’s been a while since Peter has drag raced but we think he’s got the credentials to handle this slender old girl. “The last time I drag raced was on a turbo Hayabusa, so this may be quite a culture shock!” We will keep you posted on his progress — hopefully a video of the bike in action on track. No pressure Pete…

If you want to see more of Pete’s impressive collection of bikes he’s built over the years, check out the right hand side of his blog. It’s ace, in spades.