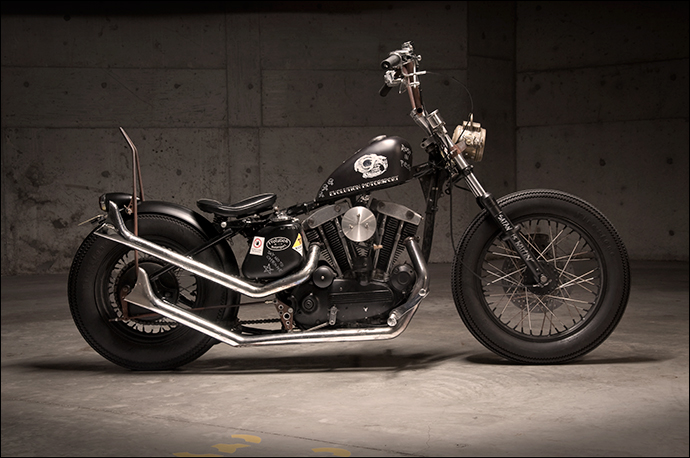 Words and photography by Andrew Jones (AKA Pamberjack)

To open, I have a frank and shocking admission to make. I don’t like Harleys. Never have. I’ve always seen them as way too bourbon, bandanas and bald eagles, if you see what I mean. Sure, on the odd occasion I’ve seen a custom HD that I’d not mind being seen on – but for the vast majority of this Milwaukee metal I’d rather set my pubes on fire than have them parked in my garage.

Then I met Jed DePyper at the recent Deus ex Machina Parallel Universe day. I shot the faeces with him for a while and he eventually told me he rode a “Rat Bobber”. Being none-the-wiser, I asked to see it. And Christ on a bike, what a bike; I was pretty much smitten from the get go. It wasn’t until later that day that I put two and two together and realised that I had just had my socks shocked and awed by a Hardly Ableson. God bless America.

PB: Tell us a little about yourself.
JDP: Just another petrol-head. Finally started riding about 6 years ago. Love it.

PB: Amazing bike. What sort of Harley was it originally?
JDP: It’s a 69 Ironhead Sporty.

PB: Can you take us through what it was like when you got it?
JDP: Yeah, I found it on Ebay, it was a tacky, chromed 70s chop with sparkly paint and the wrong kinda vibe (for me). But it was cheap and it ran. PB: You obviously had help from Evolution Motorsports. How was it working with them?
JDP: Had help? I’m useless. It’s entirely Paul’s handiwork. Dude’s awesome. I just told him exactly how I wanted it and he brought it to life. I’m sure he would have liked to do it a bit classier, but I wouldn’t have a bar of that. I sourced a lot of the parts and he made it all come together. I’d like to say I had more hands on, but I’m too busy being a poseur to get any grease on my girly fingers. PB:  How’d you do the artwork on it?
JDP: White paint pen, then scraped it off with a pocket knife.

PB: What reactions does it get from strangers?
JDP: Junkies seem to like it. PB: How do the cops treat you?
JDP: Haven’t had any probs yet. Despite appearances, it’s all fairly legit. They’d probably like a front fender and chain-guard, but no hassles thus far. Plus, I just skulk about in the back-streets like a cretin.

PB: Does Satan mind you borrowing his bike?
JDP: I sold my soul and all I got was this shitty, two-wheeled tractor? Besides, Satan rides a Vincent Black Prince. PS. Jed had met me exactly ONCE before he LOANED ME THE BIKE FOR THE WEEKEND so I could take some time to get the photos just right. If that’s not being helpful and trusting, then I don’t know what is. Think I’ll try for his credit card and his mum next time…