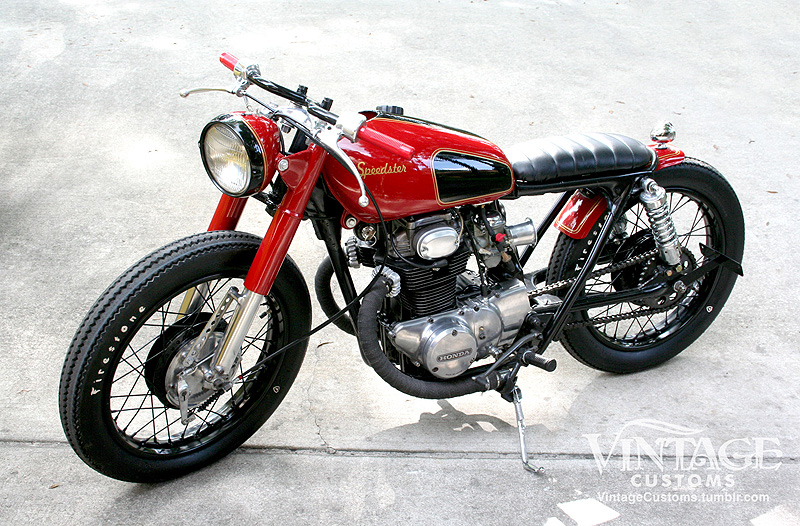 Vintage Customs was started a couple of years ago when Jason Lajkov quit his graphic design job to pursue his dream of building custom motorcycles for a living. Since we featured one of his early builds just over a year ago, he hasn’t looked back and his bikes seem to just keep on getting better. This stunning 1969 Honda CB350 which Jason named ‘The Speedster’ hasn’t always been beautiful; when Jason bought it she was uglier than Ernest Borgnine in lipstick and a tutu. “I got the bike from a salvage yard – it was just going to be sold as parts” explains Jason. “The motor was seized and everything was really rotten and destroyed”. Jason saw past all the rust and visualised what this old girl could look like in the right outfit. So he got to work. The first thing that had to be replaced was the cylinder head, pistons and then a full rebuild of the motor. The transmission also had some issues, so that got a going-over too. “I cleaned up the frame, chopped the fork springs and put a set of Rebel 250 shocks on the rear to give her a nice stance.” says Jason. The tank is an aluminum Yamaha TT500 tank which was painted by Jason himself. The paint he chose was a classic combination of Regal Red & black with gold pin-striping and lettering. Then a set of the ever-so-popular Firestone replicas were added to keep to that vintage styling. The levers and controls are all stock but Jason built the handlebars and added those ruby red retro grips. “Stripped down and cleaned up was the goal ” he says. “This little beauty also sounds amazing & really hauls due to its new diet.” If Jason’s goal was ‘stripped down and clean’ then we think he acheived that in spades. This brat-style cafe racer is as stripped down as Miss July in a heatwave and just as worthy of being pinned up on your bedroom wall. If you want to hear what she moans like, then hit this jump, otherwise just enjoy the pictures here before someone walks in on you and starts to ask some embarrassing questions…