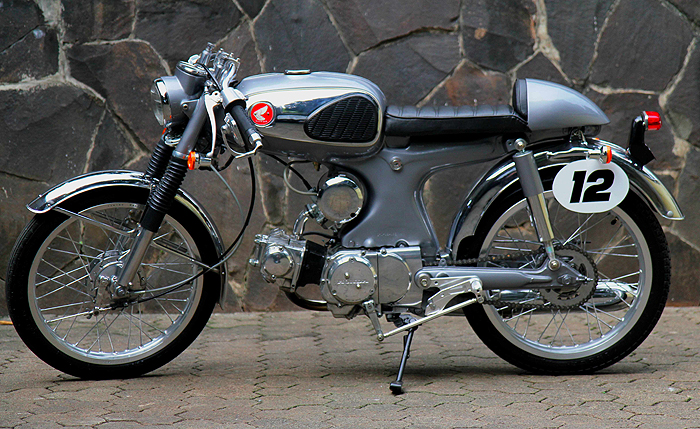 Most motorcycle shops start by building bikes for a living and then end up printing the odd tee with their logo on it to sell on the side. Not these guys. They started a clothing label that now builds bikes on the side. Uprising is label designed by two guys from Jakarta, Ariadi Poernomo and Pedi Tahir. “30 year old kids with motorcycles in our hearts,” says Ariadi. “Our clothing is coming out later this year and we’ve always teamed up with local talented builders to make our rides; we’ve decided we wanted it to be part of the brand… which is why all our bikes are a collaboration. But sooner or later we are planning to have our own workshop. We do sell these bikes afterwards, so we can build more new stuff.” They have many bikes on the go at the moment but their latest is this stunning 1969 honda s90 café racer. “We teamed up with a builder by the name of Pisone Terrasse. We wanted to make a clubman and a cafe racer but the main thing was to keep it in its original form, slick and clean knowing that keeping bikes in their original form will be good for their value in the future. So we chose the s90 because of the small hanging engine and the funky-looking gas tank. The hardest part was finding some of its original parts and we rebuilt the engine from scratch as well. It took about 2 months for this project to be well prepared for the road.” “We go to all this trouble ’cause we believe there’s value and soul in these vintage bikes. This bike took around two months finish, and once we got the clubman bars on it looked beautiful. We also wanted a clubman-looking seat as well.” “Some of the parts were actually bought from friends who we know still had some n.o.s. parts for the s90. The tank and headlight and speedometer are n.o.s that we bought. The ones that came with the motorcycle were bad. Luckily we didnt have to buy the parts from outside of Indonesia. The seat was custom made; we wanted to make a simple cafe racer seat which does not stand out too much so the main focus is still the gas tank. The engine it self is all stock.” We reckon that Uprising is set to make a small fortune from their clothes. And if that doesn’t pan out due to some strange, freakish twist in the space/time continuum then hell knows they’ll sure be able to make it rich with their spannering. Anyone looking to invest in a sure thing?