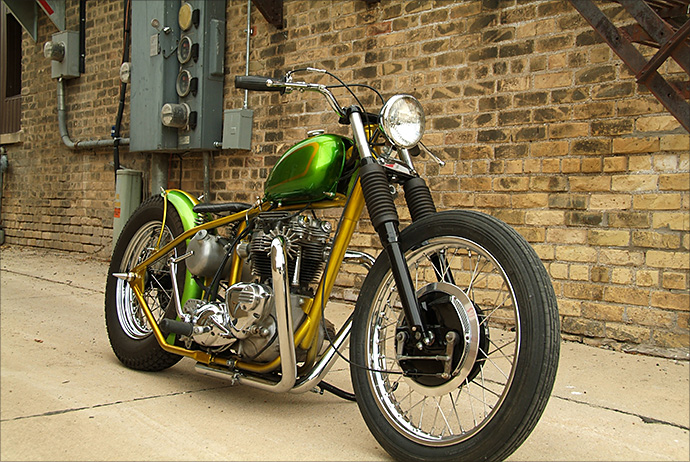 Me, I’m a fussy bastard. Can’t do anything without mapping it out to the nth degree with contingency plans and failsafes and such nonsense. Which is great if you have an issue that you saw coming, but of course the real issues are always the ones you DON’T see coming; the ones you can’t possibly plan for. These kinds curveballs really do my head in. Not so for one Mister Kevin White from Washington state in America’s Pacific North West Spencer, Iowa. Nuh-uh. See, he’s the kind of guy that seems to be able to roll with the punches and push on through to the other side where he’ll pull up on a killer custom with a smile from ear-to-ear even though his build jumped from one track to another like a electrocuted DJ at a Drum ‘n’ Bass festival. Meanwhile I would have been kicking back in a nice padded workshop with some of those special overalls that let the nice doctors tie your hands behind your back so you can’t reach your Snap-Ons.

Over to Kev. “I was visiting my buddy at his bike shop and he had a basket case ’72 tr6c engine laying on the floor. I bought it the same day and drug it home. Wanted to find a Rickman frame and build a proper cafe racer. Couldn’t source a frame so i switched gears and decided on a traditional style bobber. I found a ’69 t120 frame with bolt-on hard tail on ebay and bought it. It was garbage: no kickstand lug, both top tubes were cut, pulled back and welded (crooked) for more rake and the hard tail had damage. My good friend Tony and I spent a marathon day replacing the top tubes, making it true and plumb, and turning the rear portion into a flowing lines weld on hard tail.” “I sourced a NOS Wassell tank and relocated the petcocks to the back and used HD VL petcocks. I found an oil tank off a BSA flat tracker and made the seat pan. I switched the ’72 rocker boxes for ’71’s for the earlier look. I had an Amal monobloc on the shelf with a Webco float bowl chamber that I used and found the velocity stack in England. I made the footpeg brackets on put Bates’ pegs on. Found a ’36 Ford spare tire cover to build a fender out of. I wanted a rider and prefered running a front brake and found a TLS triumph hub. I laced the wheels, built the engine and forks, and painted it.” “Tony made the battery box/coil bracket/ boyer ignition bracket all in one piece. I was pushed to get it done to take to the S&S 50th party in LaCrosse, WI. We finished it up at 6pm on Friday night, rode it around the block and drove through the night to the show. Next day, I put 140 miles on it.” “I’m really happy with the traditional style I was striving for. The rear fender came off at speed and destroyed it. The only bolt I forget to check. Found another Ford cover and WELDED the bolt. Its a gas to ride and will be in the stable a long time to come.” We hope you like what you see, because you’ll be getting more of Kev’s work here on Pipeburn in the coming weeks as his latest build is just about ready for her close-up, Mr DeMille. What’s he gone and created now, I hear you ask? Well, remember that “proper cafe racer” he was going to make? Oh yes. Let’s just hope the build went a little smoother this time. People often ask Kevin how he got the paint to emit that radiant, green glow… “The rear fender came off at speed and destroyed it.” Note distance from rear fender to Kev’s ass…