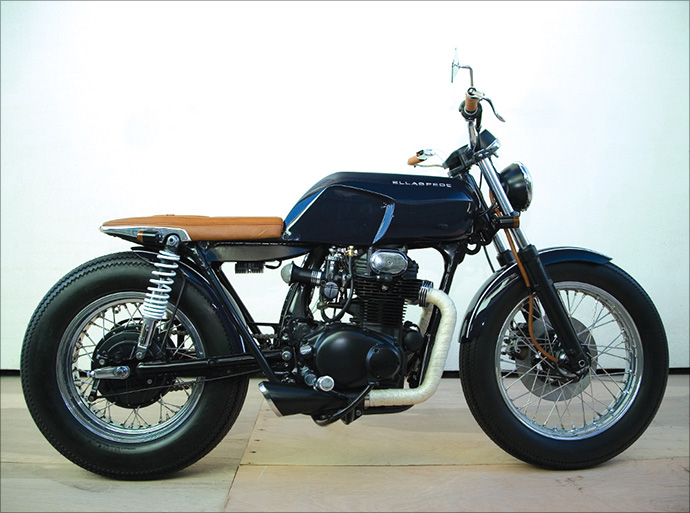 Ever found yourself in the midst of a stalled custom project due to a nasty case of procrastination? Whether it be a sudden and irrational dislike you develop towards your less-than-perfect tools, an aversion to spending too much time in that cold, damp box you call a garage, or the guilty realisation that yes, maybe your better half is right and that you should spend some “quality time” on relationship building. Whatever the case, the excuses are myriad but the results are the same – an unfinished bike. Consider then the design team of Steve and Leo at Brisbane’s Heluva Pty Ltd who had their project put on hold by nothing less than Australia’s worst ever floods invading their shop. All this and they still managed to turn out one of the most original and innovative CB Hondas we’ve seen in a month of blue moon Sundays. Feeling a little guilty now, are we? Leo takes up the story. “To give you a bit of a back ground, Steve Barry and I (Leo Yip) are both industrial designers and met whilst at university. After finishing our degree we landed jobs in the design industry. I worked in a consultancy designing electronic consumer goods, Steve in a medical design company designing surgical equipment.” “After a while of working for ‘the man’ we were both ready for a change and discussed the idea of building bikes and designing related products for ourselves. We left the jobs and started our company Heluva Pty Ltd. In 2009, we bought a run down, rusty and non-running 1971 Honda CB350, from just outside of Bundaberg. Once back at headquarters (Leo’s garage) we assessed the bike and started sketching ideas. A wide range of plans for the bike came out but we as we were setting up a business and had other projects on the go we didn’t really act on it until mid 2010. By early 2011 the bike was close to being released, but then the Brisbane flood hit us hard.” “We managed to save the CB350 and some other bikes we had since obtained from the rising water by pushing them up a few flights of stairs. However, the aftermath was basically 6 months of clean up and repurchasing a lot of tools. The water level caught many people out and the insurance dramas are still on going.” “It has taken a while but with a makeshift workshop we finished the 350 and took it to its first show in August this year. Our knowledge and skills from Industrial Design and car restoration have helped in creating 001. As mentioned, we started off by sketching the motorcycle, then went onto to shaping the tank and seat out of white foam.” “From there we went to metal, hand fabricating the tank and seat. We didn’t want to just do another ‘café’ CB350… I guess it was more a case of knowing what we didn’t want rather than what we did. The result (we think) fits with our idea and design style of taking elements of the old and blending them with the new. We haven’t really defined what the style of 001 is… and we kind of like that about this bike.” “001 is the first of hopefully many bikes to be released under our brand name ‘Ellaspede’. We are currently working on a few others and hope to release another one or two before the end of 2011.”

So, what are you waiting for? Some kind of well written wrap-up parragraph that finishes the story and makes you feel all nice and warm inside. Get off your asses, go to your bikes and get wrenching. After all, if it’s not six feet under a muddy river then you haven’t really got a decent excuse, now have you?