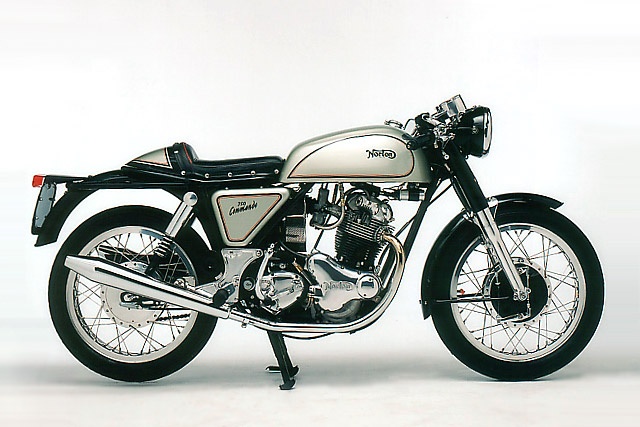 The Norton Commando with its Isle of Man heritage and five times Motor Cycle News “Machine of the Year” award is special enough, but this particular 1971 Fastback Special has a tale that starts with the man who rescued Norton from its British grave. Across the Atlantic Kenny Dreer was the man behind Portland based Vintage Rebuilds who salvaged the Norton name in the 1990’s and commenced work on reviving the brand to its former glory under the Norton America banner.

George Kraus from GEK Restorations tells how his dream of building the ultimate Commando that is now pictured before you first came to mind. “It was an all-night drive back from the San Jose BSA Clubman Show, about 1993 or ’94 with Kenny Dreer. The sleep deprived drive developed a drug-like effect on us two vintage crazed individuals and in our hyperactive minds, we designed the perfect “Manx Commando”. To get his hands on a Commando, George designed Kenny’s original Vintage Rebuilds and Restorations brochure in exchange for a core bike and all the parts and services at cost price. To get the most out of the legendary Norton, George set about working in his small home workshop performing all the upgrades that Dreer had designed over the years. From the three bolt swing arm to the 30mm belt-drive and the handmade wiring harness with aircraft connectors and complete solid state electronics only the very best was added to the ’71. Custom designed and handmade rear-sets were added along with an external oil filter, machine turned and polished stainless steel hardware and machined vents in the drums. For the Cafe Manx look ‘Roadholder’ Front Forks with full covers from the late Atlas models were installed and the wheels are Aront aluminum rims laced with Buchanan stainless steel spokes. The seat is an aftermarket design originally intended for use on a Triumph, it was split down the middle and widen to suit the Commando frame then re-molded to add the mounting hardware. So good was the result the design was used on a number of Dreer’s restorations at Vintage Rebuilds.

The tank was discovered at Fair Spares America and turned out to be an old Interpol unit complete with battery and radio trough. As it was just like the Long Range tank George desired he had a new top section designed and welded in to restore the flowing lines to non-police spec. While many may believe the paint is a factory Norton colour it is actually a Chrysler hue spotted at the Portland Auto Show complete with graphics and pinstriping by Mitch Kim. Hand-made aluminum front fender stays and license plate frame complete the clean look. From its very early days in Birmingham to the Dreer years in America, Norton has been known for quality design and workmanship. That ethos is continued not only with the immaculate presentation that this Commando displays but affirmed by more than 23,000 miles of trouble free riding George has had at the controls since the restoration was completed.